Feudalism vs. capitalism is an interesting topic for historians and economists as these economic systems have, to a large extent, shaped the formation of the contemporary human societies. Proponents of capitalism claim that socialists wrongly associate capitalism with feudalism. Socialists, on the other hand, are of the view that condition of the working class hasn't changed in capitalist economy and they are still exploited by the rich.
Feudalism
Feudalism is/was the socio-economic system which consisted of the lords, nobility and the vassals. It was prevalent in the Medieval Europe and was characterized by reciprocal legal and military obligations between the ruling class and the working class. Under feudalism, lords granted fiefs (land) to vassals, and in turn got their support in case of a military offensive. The vassals could keep around three-fourths of the produce for themselves and the remaining one-fourth was given to the lords as a form of tax.
To ensure that vassals remained loyal to the lords, a formal ceremony was carried out in which a two-part act of homage and oath of fealty was performed. The vassals and lords were in a feudal relationship in which the vassals were obliged to provide military service to the lord. Although the vassals worked in the fields, they could never own any land of their own and their condition remained static. This system broke down and was replaced by a new economic system, known as capitalism.
Capitalism
Capitalism is the social system in which we currently live in. In this economic system, the ownership of property rests with a minority of people known as capitalists who have the required means of production and distribution. The majority of the people are employed by the capitalists and they receive wages for the work that they do. Critics of capitalism claim that the plight of workers is similar to those of workers under feudalism as the capitalists get to keep the major part of the profit, in spite of the fact that it is the workers who are responsible for the profits. This is one of the underlying causes which led to the rise of communism in countries such as China and Soviet Union.
In feudalism, a worker (vassal) remains a worker for the rest of his life, and doesn't have any chance of progressing, whereas in capitalism, if a worker is talented and knowledgeable, he can have immense career opportunities. In feudalism, workers had to work on lands which they could never own, and the work that they had to do was purely agricultural. During wars and other hostile affairs, they had no other choice but to assume the role of a soldier. In capitalism, on the other hand, if a worker has enough capital and expertise, he can very well start his own business and become a capitalist.
As far as the position of the ruling class is concerned, in feudalism, the lords had assumed a permanent position of dominance in the society. Their authority was unchallenged and they had the final say in all the social and economic matters. In a feudalistic society, the lords held supreme power and their relationship with the vassals was based upon the belief of subordination. Capitalism also provides supreme power to the ruling class, but there is fierce competition and the rights of the employees are safeguarded by government policies. A capitalist cannot take his position for granted and has to keep innovating and developing his business to stay afloat in the competition.
Many thinkers are of the view that most of the attacks on capitalism are because of the hatred that socialists have against feudalism. The tyranny of the ruling class under feudalism was the major cause for its downfall. There are numerous shortcomings in capitalistic form of economic system but when compared to other economic systems, it appears to be most feasible.
Share This

Is Capitalism Good or Bad? 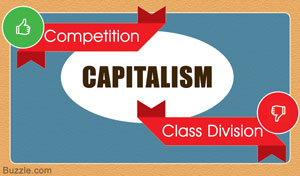 Pros and Cons of Capitalism