Understanding Corporatocracy and its Effects With Examples

Corporatocracy can be defined as a system that is indirectly controlled by huge corporations, under the guise of democracy. The Buzzle article below will help you understand corporatocracy with examples.

Home / Uncategorized / Understanding Corporatocracy and its Effects With Examples 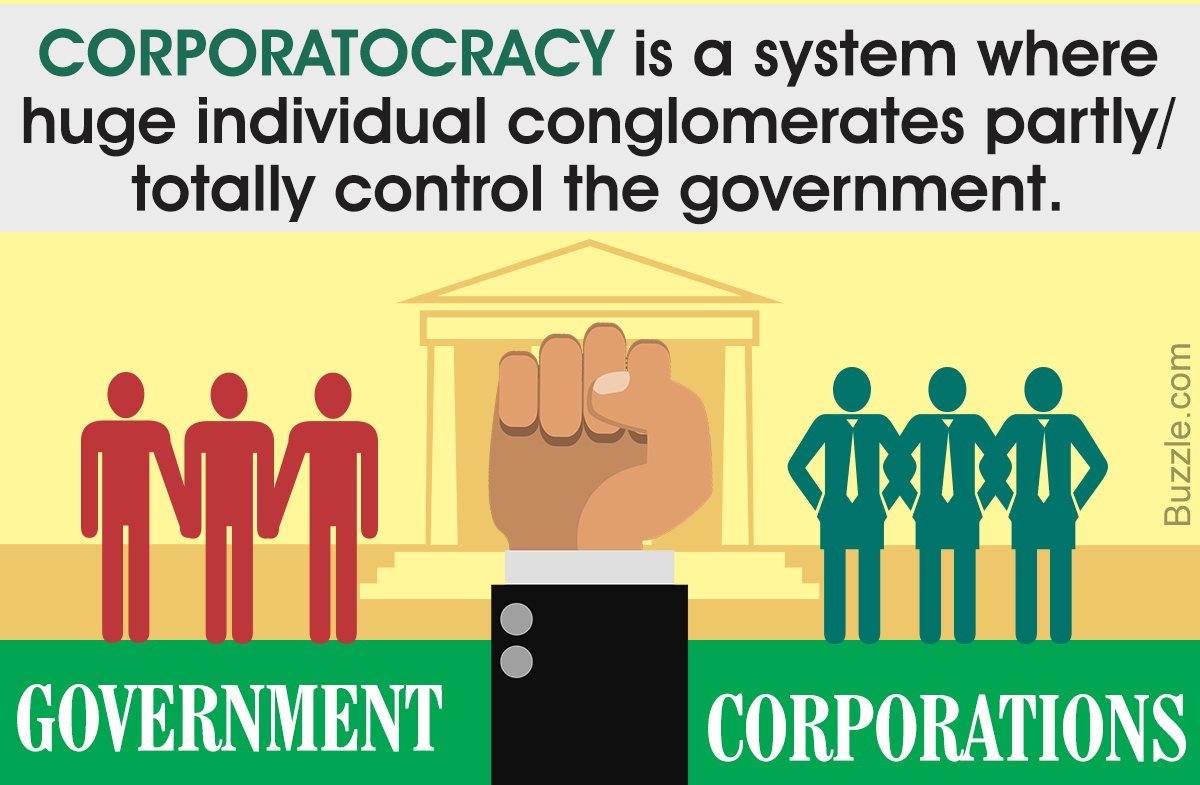 Corporatocracy can be defined as a system that is indirectly controlled by huge corporations, under the guise of democracy. The Buzzle article below will help you understand corporatocracy with examples.

Important:
In the income analysis of 2014, at the University of Berkeley, economist Emmanuel Saez asserts that income inequality is one of the prime characteristics of a corporatocracy, since a relative growth in income had occurred only among the elite group of citizens.

A corporatocracy is a corporation-controlled system. Prior to reading any further though, we would like to mention upfront that there are no officially true corporatocracies in the world. No government comes forward to declare that the country is partially being run by powerful businesses. Possibly coined from the words ‘corporations’ and ‘democracy’, it is a disparaging term, used extensively by economic experts, political researchers, and liberal critics. It means that the system, by extension, the country, is controlled by huge financial corporations. That is to say, the government elected by the people exists of course, but what and how they plan things for the country depends on the corporations.

The prime reason behind this could be the huge amounts that these corporations contribute to the GDP of the country, owing to which the elected leaders may feel obligated to bow down to the financial community. Some of the major indications of corporatocracy in America are corporate taxes, income inequality, unrestricted stock buybacks, etc.

An Introduction to Corporatocracy

The Goal of Corporatocracy

Campaign Support
You know you exist in a corporatocracy when you observe that corporations begin supporting government campaigns. This is done so that the government reciprocates when the corporations need them.

Financial Influence
There is an enormous growth in the financial and banking sectors of the country. They are given a lot of benefits and opportunities, and the financial sector has a marked influence all over.

Increased Acquisitions
Corporations seem to acquire business over business; there is an increase in the mergers and acquisitions. The corporate landscape is subject to a potential expansion, leading to increased compensation and global benefit.

Increased Corruption
Increase in corrupt practices is possibly a commonly observed characteristic of a corporatocracy. Corporations may very well bribe government leaders to get their job done.

Stagnant Economy
While the corporate behemoths grow richer and richer, the smaller businesses remain stagnant. This leads to imbalanced economic conditions and inequality. As the income of the rich keeps increasing, the wages of the common man remain stagnant.

A couple of pros and cons of this system are enlisted below:

If corporatocracy can be used for the overall development of the country, it can be considered as a good system. For instance, if huge corporations can help secure justice to an innocent due to their power or exercise influence to do something advantageous for the country. The situation now, however, does not seem to remotely consider these options, leading to an increased income inequality and harsh criticism of corporatocracy.