The Difference Between Kidnapping and Abduction in Legal Terms

Kidnapping and abduction are two terms that denote the act of taking away a person illegally, using force. Is there any difference between them? Let us find out.

Home / Uncategorized / The Difference Between Kidnapping and Abduction in Legal Terms 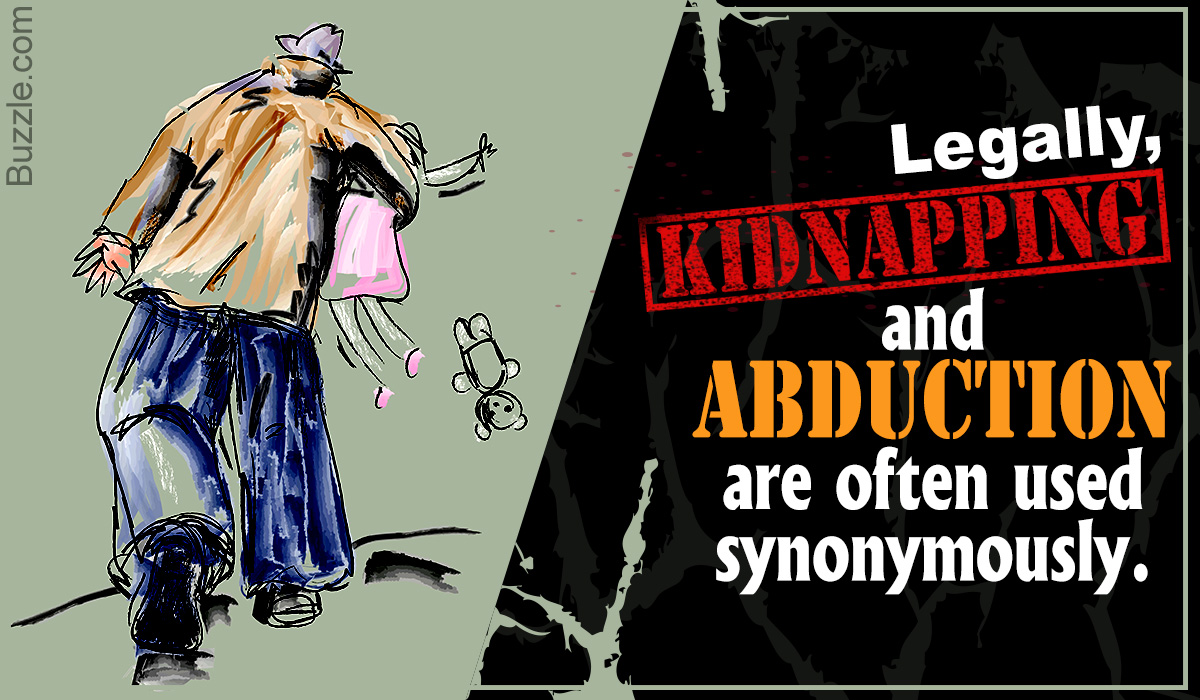 Kidnapping and abduction are two terms that denote the act of taking away a person illegally, using force. Is there any difference between them? Let us find out.

Most of the U.S. states have statutory provisions that deal with kidnapping, an offense that is often defined using terms like abduction and abduct. The Code of Virginia § 18.2 – 47 (C) explicitly states that the terms kidnapping and abduction (as used in the code) are synonymous.

Most of the legal terms are beyond the level of understanding of common man. However, terms like contract, divorce, murder, rape, kidnapping, abduction, etc., are used in common parlance. It has been found that terms related to crimes are better known to laymen, when compared to the provisions of civil law. Media coverage of criminal trials could be a possible reason for such awareness. Kidnapping and abduction are two such terms that most people are familiar with. Though both terms denote the same offense, they are considered separate in certain jurisdictions.

In the United States, the terms kidnapping and abduction are often used interchangeably. 18 US Code § 1201 deals with the crime of kidnapping, and this section incorporates the term abduct. So, abduction is not a separate offense as per this federal statute. Even the statutes of most of the states do not consider kidnapping and abduction as separate crimes. Nowadays, the term abduction is mostly used in case of child abduction. A parent may abduct his/her child who is in the sole custody of the other parent. Strangers may also abduct children.

Kidnapping is defined as, “The crime of unlawfully seizing and carrying away a person by force or fraud, or seizing and detaining a person against his or her will with an intent to carry that person away at a later time.”

It is really difficult to come up with clear-cut differences between the two offenses that refer to the action of unlawful taking and detaining of one person by another. 18 US Code § 1201 defines the crime of kidnapping. – “Whoever unlawfully seizes, confines, inveigles, decoys, kidnaps, abducts, or carries away and holds for ransom or reward or otherwise any person, except in the case of a minor by the parent thereof, when –

(1) the victim is willfully transported in interstate or foreign commerce;

(2) it happens within the special maritime and territorial jurisdiction of the United States;

(3) it happens within the special aircraft jurisdiction of the United States;

(4) the victim is a foreign official, an internationally protected person, or an official guest as those terms are defined in 18 U.S.C. § 1116(b); and

(5) the victim is a Federal officer or employee designated in 18 U.S.C. § 1114; shall be punished by imprisonment for any term of years or for life and, if the death of any person results, shall be punished by death or life imprisonment.” Title 18, US Code § 1201(g) deals with kidnapping of children under the age of 18. If the offender is above the age of 18, and he/she is not a relative or guardian of the child, such kidnapping can be punished with an imprisonment term of not less than 20 years. 18 U.S. Code § 1204 deals with international parental kidnapping. In this definition, the term kidnap as well as abduct are used to describe the act of kidnapping. Abduction is not treated as a separate crime.

Even the state laws do not differentiate between abduction and kidnapping. According to the law of New York, “A person is guilty of kidnapping in the first degree when he abducts another person and when:

(2) He restrains the person abducted for a period of more than 12 hours with intent to:

►Inflict physical injury upon him or violate or abuse him sexually; or

►Accomplish or advance the commission of a felony; or

►Terrorize him or a third person; or

►Interfere with the performance of a governmental or political function. Subsection 3 deals with death of the victim during abduction.

According to the Code of Virginia § 18.2-47, “Any person who, by force, intimidation or deception, and without legal justification or excuse, seizes, takes, transports, detains or secretes another person with the intent to deprive such other person of his personal liberty or to withhold or conceal him from any person, authority or institution lawfully entitled to his charge, shall be deemed guilty of abduction. Subsection B is about abduction with the intent of subjecting the victim to forced labor or services. Subsection C states that, “The terms “abduction” and “kidnapping” shall be synonymous in this Code.”

In short, both terms are used interchangeably, and are often used as synonyms. There are certain jurisdictions outside the United States that treat kidnapping and abduction as different crimes. Let us take a look at how they differentiate these two offenses.

There is no conclusive way to differentiate between abduction and kidnapping. However, there are certain subtle differences that are discussed here. First of all, abduction is mostly used to denote the act of taking away a child from his parent. In case of kidnapping, the victim can be any person, including a child.

In short, kidnapping and abduction are two terms that denote separate crimes in some jurisdictions. In the United States, both are used interchangeably with no conclusive differentiating factors.