The Different Types of Population Pyramids Explained With Examples

The human population has seen a sharp increase since the beginning of the Industrial Revolution in the 18th century, due to the corresponding improvements in food production, medical care, and general living conditions. However, today, each country is at a different stage of economic development, and it may or may not have the infrastructure required to give all its citizens a better life. Population is not uniformly distributed across all countries either, with some countries having a lesser number of people spread over a large territory, and others showing the opposite trend. How then can a country’s population be estimated, so it is in a better position to care for its citizens in the future? The answer lies in different types of population pyramids. 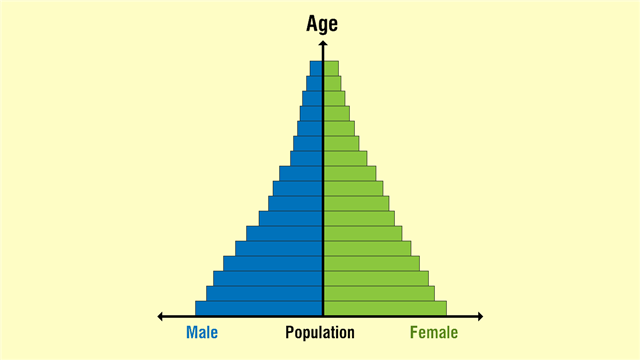 A population pyramid is a graph which shows the age-sex distribution of a country’s population at a given time. This diagram shows the variation of both, the male and female populations with age, which is not possible with conventional bar graphs, and results in a pyramidal structure. The country’s population is shown on the X-axis, while the age is displayed on the Y-axis in 5-year groups, called ‘cohorts’. 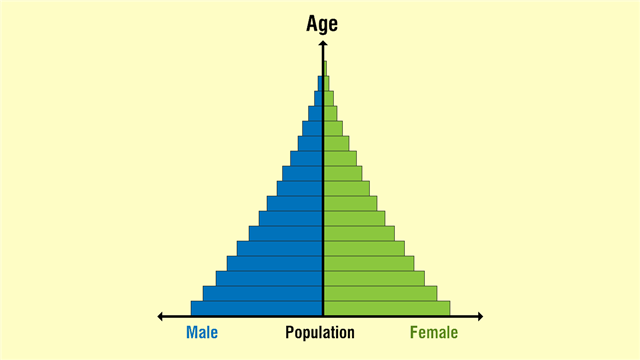 This type of graph has a triangular shape, with a very wide base and pointed apex. Each age group shows a bar less wider than that of the age group before it, indicating that more people die at each higher group. The large base shows a high birth rate, which is probably due to factors like a developing economy, poverty, low levels of female education, and less awareness of birth control measures.

The tapering top of the graph indicates a high death rate, meaning that the life expectancy in such a country is less. Factors like poor living conditions and the lack of proper medical facilities may be responsible for the high mortality among the elderly. Such countries have a higher population of children as compared to people of working age or older people. This results in a strain on the working-age population to support the large younger population, making them work in stressful conditions.

Examples: Such a population pyramid is a characteristic of newly developing countries such as Afghanistan, Bangladesh, Kenya, and some countries of Latin America. 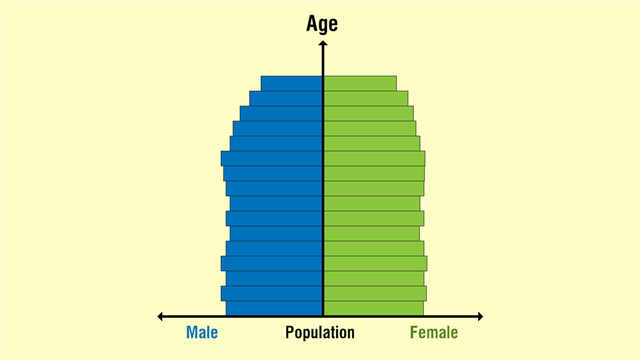 This type of population distribution shows a rectangular or squarish shape, with almost the same number of people in all age groups. There is a slight taper at the top, which is perfectly natural, due to more deaths occurring among the elderly. Such countries have a high life expectancy, where more people live to a ripe old age, due to better living conditions, medical facilities, and geriatric care.

They also have a stable birth rate, as there is more awareness and incentives to use birth control measures, along with the empowerment of women. Such a pyramid shows a stable increase in the country’s population with time.

Examples: Highly-developed countries such as USA, Sweden, and Netherlands, which have well-established economies, come under this type. 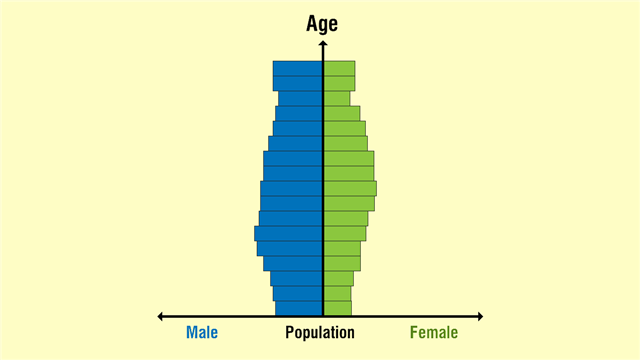 A constrictive pyramid is the opposite of an expansive pyramid, with a slight constriction in its younger age groups. There is high life expectancy and good living conditions in such a country, leading to a higher number of older people. Despite this, there is a lesser number of births taking place, which is outnumbered by the number of deaths. This indicates a graying as well as decreasing population.

There is a higher number of older people than the youth in the country, which places a burden upon the working-age population to support the large number of elderly dependents. The decrease in the number of births indicates that people are choosing to have lesser children, and may also be due to increased emigration.

The age structure of a population diagram can help a country decide the needs of its population in the future, so that it is more prepared to face them. For example, a country with an expansive pyramid can strengthen its education sector to deal with its high number of children, while another with a constrictive pyramid needs to focus more on its geriatric and medical care facilities to take better care of its older population.