The Issue of Institutional Discrimination With a Few Examples

Here, we will delve into what institutional discrimination is, and help you understand how it is different from other forms of discrimination, along with providing examples of the same.

Home / Uncategorized / The Issue of Institutional Discrimination With a Few Examples 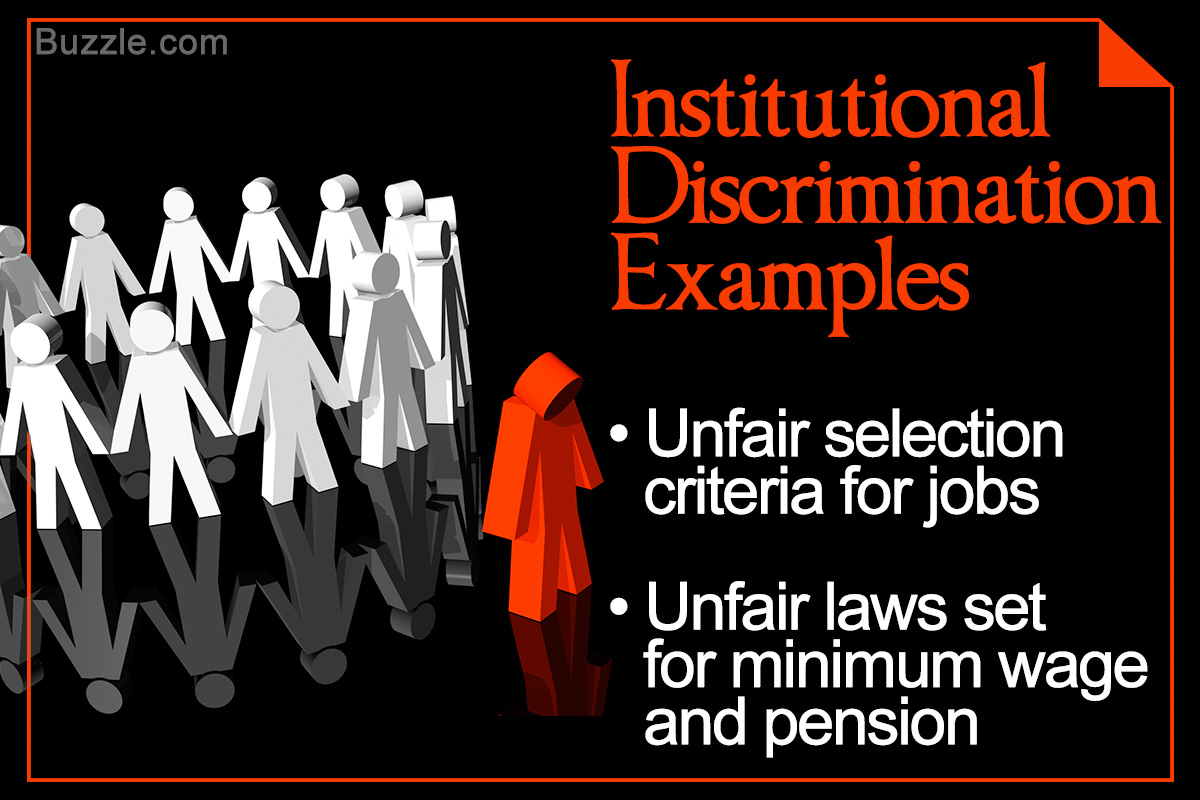 Here, we will delve into what institutional discrimination is, and help you understand how it is different from other forms of discrimination, along with providing examples of the same.

The main reason behind institutional discrimination is pegged to be pure, unadulterated prejudice. Many times, this is subconsciously done.

Institutional discrimination is the act of denying equal rights to and singling out certain individuals in society by the varied institutions of the same society, based on a number of factors such as color, gender, education, sexual orientation and the like.

This form of discrimination is considered highly detrimental to the functioning of society and is feared to shake the very fabric of the same. In this OpinionFront article, we will understand in greater detail the nuances of this concept through certain examples of institutional discrimination.

What is Institutional Discrimination

What makes this form of discrimination even more dangerous than other forms of discrimination is the fact that it is ‘institutionalized’, meaning that it has been incorporated into the very procedures, structures, and processes of various organizations―so it’s not just one person who is discriminating, but an entire organization. These include the government and other corporations, public institutions like schools, healthcare centers, and police forces, as well as financial institutions like banks and investment firms, along with other social bodies.

The basic crux of this form of discrimination is that the policies and practices that are put forth by an institute benefit only a particular group at the expense of another.

☛ Though this form of discrimination may not always be openly witnessed, it reflects in the laws, and the rules and regulations of a state, since it is systematic by nature. Certain statistically noticeable trends can also point towards the existence of this phenomenon; for example, if a particular section of people are disproportionately absent from among a group of people who possess the relevant skills required for the job, it is usually the case of institutional discrimination at play.

For example, for an executive job, only a certain ethnicity of people are missing, even though there should be no reason why they would not possess the required educational backing, then that is a case of institutional discrimination.

☛ A common example of institutional discrimination can be seen in the way jobs are given. Many times, the positions (especially higher positions) are not even advertised and the post is given to someone via recommendation, or the candidate is selected through word of mouth. Thus, these recommendations tend to be homogeneous in nature.

Even if that is not the case and the preliminary rounds and interviews are conducted, the other forms of discrimination make an entrant―if the candidates are found to be equally skilled, then factors like race, ethnicity, their acceptance in the work setting, etc., might come into the picture. In such a case, the people whom the other employees will better adjust with will be given preference (for instance). This is one of the most common institutional discrimination examples today.

☛ Other common examples in schools may include instances like a teacher using jargon that might not be known to students of a particular socio-economic background or setting a paper that requires prior knowledge about an incident.

☛ Other instances of the same include setting selection criteria for jobs or certain educational courses, and unfair laws that are set for factors like minimum wage and pension, and job opportunities, promotions, and training opportunities for employees in an organization.

☛ Recent studies have found that institutional discrimination occurs in most professions of society―recently, a law which stated that people have to be of a certain height to enter the police was changed to lower the height recommendation, thus opening up opportunities for several women and men.

Similarly, it was found that people of certain groups and or color were given less priority when it came to life-saving operations at medical facilities. On similar lines, people of certain ethnic and minority groups were more likely to be denied loans by financial institutes, even though they were as eligible as any other group were.