Simple Explanation of Moral Realism in Philosophy With Examples

Moral realism in philosophy is a point of view that puts forth the idea of moral facts and values that must be followed by every human being. We, at OpinionFront, explain this concept along with definition and examples to give you a fine overview of moral realism. 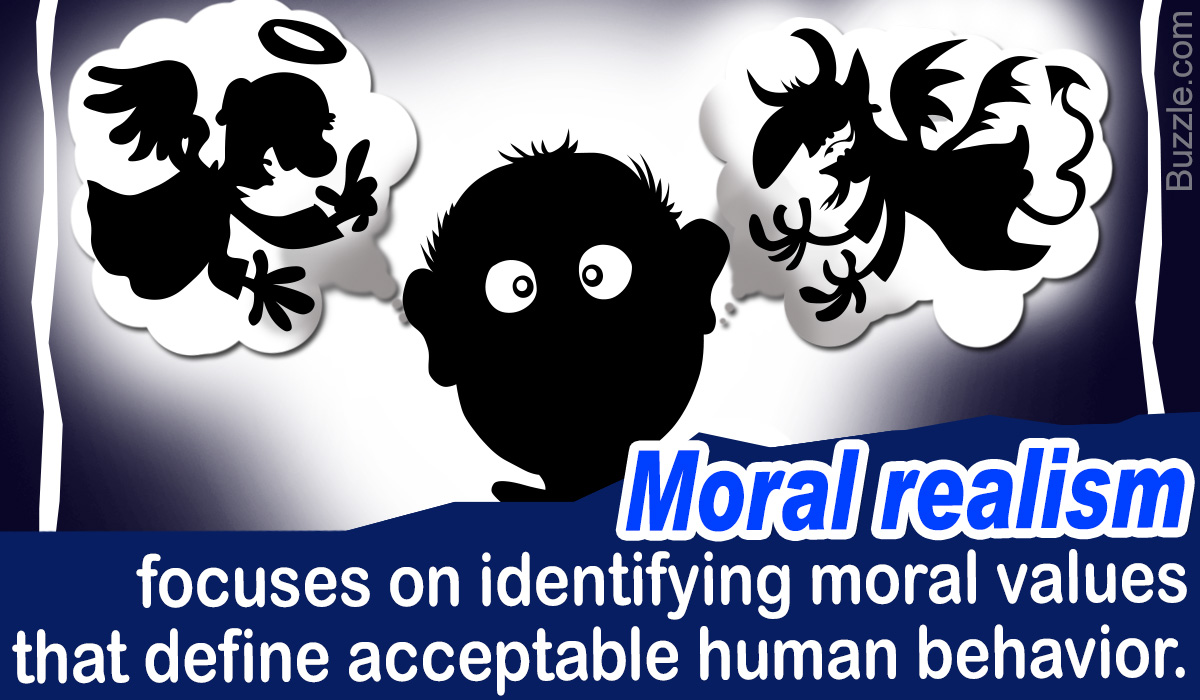 Moral realism in philosophy is a point of view that puts forth the idea of moral facts and values that must be followed by every human being. We, at OpinionFront, explain this concept along with definition and examples to give you a fine overview of moral realism.

Dating back to Plato!

Many philosophers believe that the concept of moral realism was probably the work of the great Greek philosopher Plato.

Wouldn’t the world be chaotic, if there were no ethics, no morality? If harming others was just okay, and nobody would even judge you. Breaking all the rules, not having one bit of kindness, troubling others as though they were mere toys. Not caring or feeling any sympathy towards the oppressed, and continually torturing them without any remorse.

All this would seem normal because this is what an individual in society would do if he/she did not have morality. The sense of doing the right things for yourself and for others is what moral realism focuses on. Let us see what exactly moral realism is about.

Moral realism is an ethical view that says that there are certain moral facts and rules that every individual must follow. These facts are like a way of living, a moral lifestyle, that define your behavior towards people and other things. Things which are right and those which are wrong, what should be done and what shouldn’t be, what is acceptable and what isn’t, are moral facts. Moral facts can be descriptive for a single or all individuals.

The latter descriptive moral fact is like a judgment. It doesn’t just state it, but decides for all individuals that, it is what it is. The thinking, opinion, and perception of an individual on that particular fact doesn’t matter. That is just the right thing to do. People who are supportive of this philosophy are called realists, and those who aren’t are called anti-realist.

Arguments between realists and anti-realists have been continuing for a very long time, in addition to which a new concept has risen―quasi-realism―which believes that moral facts are not explanatory. The areas of debate are cognitivism, descriptivism, moral truth, moral knowledge, and moral objectivity.

It states that moral judgements are those that come from the mind. When we feel correct about doing something, it is our cognitive understanding or mental state about something. Our intentions to do right or wrong come from within. For example, eating humans is not right. This is a moral statement. Now doesn’t it come from within to not eat a fellow human? Well, this was an extreme example. Let’s take a normal one – Robbing someone is wrong. This again is a moral statement, and the act involves harming the other person financially. This implies that it is a morally wrong act, when you harm or cause trouble to others.

It is the work of closely analyzing the use of moral language in moral statements. It holds that there is an element of truth in moral statements. Here, moral language means that which describes some kind of good deed. For example, Sheila is being good to him. We say Sheila is being good because we know and we can see what a good deed is. But how do we know that? Moral language (words like good, bad, should be done, should not be done, etc.) plays an important role, subconsciously, which helps us decide. Our upbringing, our surroundings, contribute to our decisions when it comes to moral facts.

Moral truth is a moral statement that corresponds with reality, with the real world, in an ethical way. The morality we believe in, For example, torturing an animal is wrong; this is a moral fact that we all agree on, and it corresponds with our definition of morality, then this is the moral truth.

Moral facts that we know might not always be true. Because your understanding on some aspect can be different from that of others. If you know you are right and the other is wrong, and the other knows he is right and you are wrong, who is actually wrong then? An apt example would be the statement, Euthanasia is not wrong. How would you know if it is not wrong? You can conclude this only on the basis of your perception of the statement in question. This is where moral knowledge comes into picture. You need the knowledge to know what is right and what is wrong.

Moral objectivity is the view that what is right or wrong doesn’t depend on what anyone thinks is right or wrong. These are truths like facts that exist independently, and are not influenced by opinion. For example: To kill any human is morally wrong. The act of killing a human is wrong on all accounts. Some may argue that under certain special circumstances it may not be wrong, like war. But even then, taking a life has far greater implications than just the mere act of killing.

Moral realism believes that among two contradictory beliefs, only one of them is right and the focus should be on seeking the right moral belief.