An Explanation of Separation of Powers With Relative Examples

Home / Uncategorized / An Explanation of Separation of Powers With Relative Examples 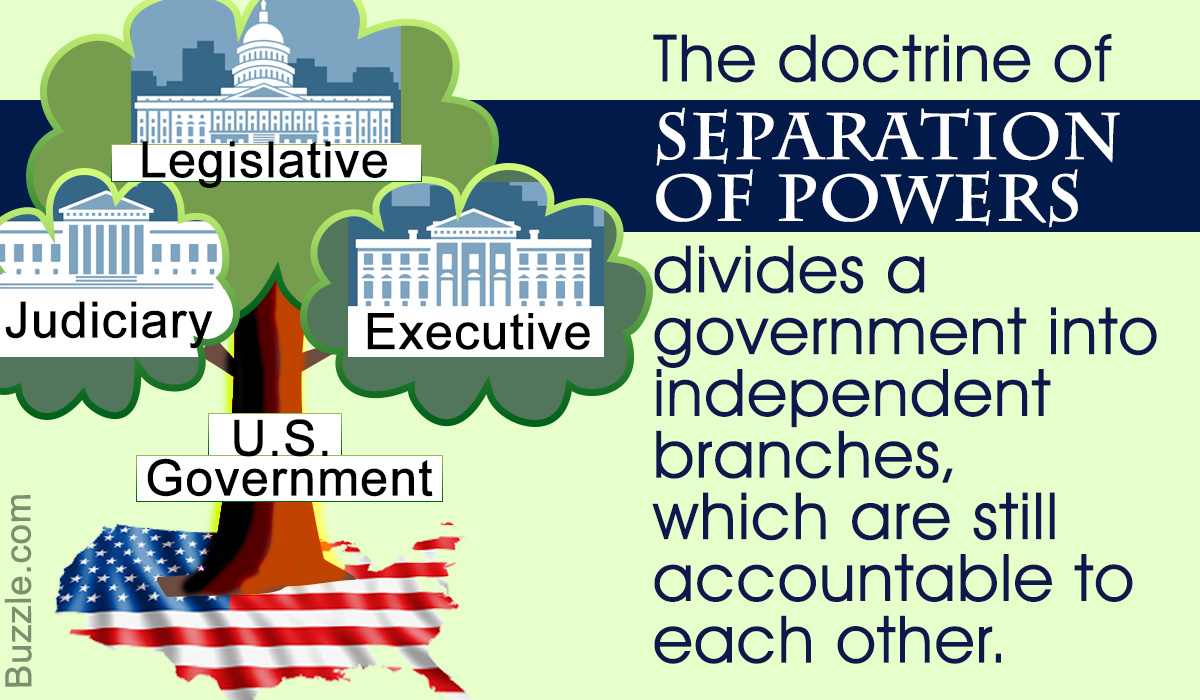 The Founders of the United States considered Montesquieu to be the foremost authority on politics. In fact, he was quoted more times than any other work, except the Bible.

Separation of powers is a theory which ensures that no part of a government should obtain absolute power. The origins of this concept can be found in works as early as that of the Greek philosopher Aristotle.

In the collection of his 8 books, collectively named ‘Politics’, Aristotle argues for a ‘mixed government’, in which some elements of monarchy, aristocracy, and democracy are intermingled, to protect people from tyranny.

However, the maximum credit for this doctrine has been attributed to the French writer and philosopher Montesquieu.

Taking inspiration from the British Government of his time, he advocated setting up a government which was tripartite, or divided into three branches, comprising the legislative, executive, and the judiciary. His beliefs were adopted by a number of countries in their constitutions, most notably by the framers of the US Constitution.

English philosopher John Locke also advocated for a government based on the separation of powers, though he did not feel the need for a separate judiciary, and supported a government divided into a legislative and an executive wing. English judge William Blackstone also believed that a branched governmental structure was critical to prevent tyranny.

He was, in part, inspired by the works of Montesquieu, though rather than emphasizing on separation, Blackstone believed that a balance between the different branches was more important. An elaborate explanation of the theory of separation of powers, with its definition and examples, is given in the sections that follow.

Separation of powers, by definition, is a principle by which the government is divided into different branches or departments. Each branch is given its own powers and responsibilities. The main focus is to make every branch independent from each other, by giving them different roles.

The most common division of the government is into the following branches:
✦ Legislative: It passes laws and authorizes funding for government programs.

✦ Executive: It puts the laws that are passed by the legislative into action.

✦ Judiciary: It verifies the constitutionality of the laws passed by the legislative and judges disputes filed before it.

So, the roles of these three branches are clearly designated. The members of each branch are elected or appointed by separate means. For example, in USA, the legislative consists of the House of Representatives and the Senate. Senate members are elected once every 6 years, and the representatives once every 2 years, in separate elections.

At the same time, the state government is also similarly partitioned into different branches, like the state legislatures, state governors, and state court systems. Thus, the doctrine of separating powers is applied both, at the federal or union government, and also at the local or state government level.

It aims to prevent a concentration of power in any particular part of the government, while interference between departments is prevented by the theory of checks and balances.

Besides, when the constitution separates powers among the various government departments, it is but natural that one of them may end up being the most powerful. It is vital to safeguard the other departments from getting encroached by this department, and also to keep the powerful department in its limits.

For example, in many nations, the legislative branch passes bills which are sent to the executive for approval. If the executive vetoes it, then it goes back to the legislature, which may either reconsider the bill or ignore the veto with a majority.

On the other hand, the judiciary can independently judge the laws passed by both, the legislative and executive, to see if they follow the law of the land. The legislative, on the other hand, has the power to impeach a judge and also the executive for malpractices. This is how the system of checks and balances goes hand-in-hand with the separation of powers.

Examples of Separation of Powers

Article 2 deals with the executive, made up of the President, Vice President, and other departments. Article 3 is related to the judiciary, consisting of the Supreme Court and other lower courts.

The US Congress is in charge of passing legislation by a majority in both its houses―the House of Representatives and the Senate. After a bill is passed, it goes to the President for approval, who may approve it, reject it, or do nothing, where the bill becomes a law after 10 days.

The President is the Commander-in-chief of the armed forces, appoints the judges of courts. The Supreme Court is charged with the task of upholding the constitution, deem any law passed by Congress or a Presidential Act as unconstitutional, as power of judicial review. The branches of the government have separated powers with adequate checks and balances.

The British Government is another example of a tripartite system, though with what has been called a weak separation of powers.

Officers of the civil services, police department, and military (executive) are barred from serving as government ministers. The judiciary is highly independent, and judges cannot serve as members of the legislative.

They have a life tenure, which protects them from encroachment from other branches. While there is some degree of separation of powers, the different branches of the government are intertwined.

The Indian Government is demarcated into the executive, legislative, and judiciary, though the constitution does not explicitly mention the separation of powers.

The parliament, with its two houses, the Lok Sabha and Rajya Sabha, forms the legislature. The Prime Minister, with his cabinet, government, and civic officers, form the executive wing, while the Supreme Court is the judiciary.

The Prime Minister, despite being a part of the executive, is elected by the Parliament. Thus, the concept does not exist between the executive and legislative. The President is the formal chief of all the three wings of the government, though he also sits in the parliament and has the powers to pass ordinances.

He can also exercise some judicial functions. The parliament also exercises some judicial duties, like questioning a breach of privilege, or impeaching a judge. Thus, a separation of powers in the strict sense does not exist in India.

In France, the President, Prime Minister, and the cabinet form the executive. The parliament, comprising the national assembly and the senate, forms the legislature. The legal and administrative orders form the judicial wing of the government.

The President is constitutionally not very powerful, but it is his popularity that brings with it a lot of power. It is true if he is from the ruling party in the legislature. He cannot veto a bill, but can send it for reconsideration to the parliament. He has a lot of emergency powers. He and the Prime Minister are both responsible to the national assembly.

The separation of powers in the German Government is guaranteed by the Basic Law of the Federal Republic of Germany.

The government is divided into the legislative, executive, and judicial wings, with less separation between the executive and the legislature. These three wings are then subdivided into 6 bodies. The executive comprises the federal president and cabinet of ministers.

The legislative comprises a federal diet, council, and a presidential assembly. The judiciary is made of the constitutional court and 5 supreme courts.

The federal ministers have reduced powers, which is compensated by powerful state governments and civil services. The judiciary is independent from executive or legislative influence than that of the US.

Like the traditional tripartite system, the legislature can only pass laws, the executive only has power to enact them, and the courts handle disputes. Members of the federal diet are elected once every 4 years, and they are free from interference by constitutional laws. Civil servants and government officials have to resign before entering politics.

Taiwan, governed by the Republic of China, has a government that consists of 5 bodies, that together make up its legislative, executive, and judicial branches.

There is also a control and an examination yuan, which is in charge of the audit and civil personnel departments, respectively.

The Chinese President is in charge of all five administrative units of the Taiwanese Government.

He selects his cabinet from members of the executive yuan, which also includes a premier, who is the chief of the executive yuan, though he has no real powers. The examination and control yuan are elected by the President himself, and have marginal duties. The President has neither the power to veto the legislature’s bills nor the power to dissolve it.

In hindsight, the doctrine of separation of powers establishes a government with distinct departments, each having their own roles and responsibilities. On the other hand, the theory of checks and balances ensures that no department obtains absolute power over the others, and forces them to cooperate amongst themselves.