Free Trade or Fair Trade – Which One is Really Better?

To most of the world, trade liberalization seemed like the answer to a high-price commodity market by encouraging competition among producers. However, there were those who opposed such a market autonomy. Fair trade was proposed to safeguard producers from developing countries. However, corporates began using it as a disguise for their less than fair practices. With an analytical view of free trade vs. fair trade debate, let's infer which one is really better.

Home / Uncategorized / Free Trade or Fair Trade – Which One is Really Better? 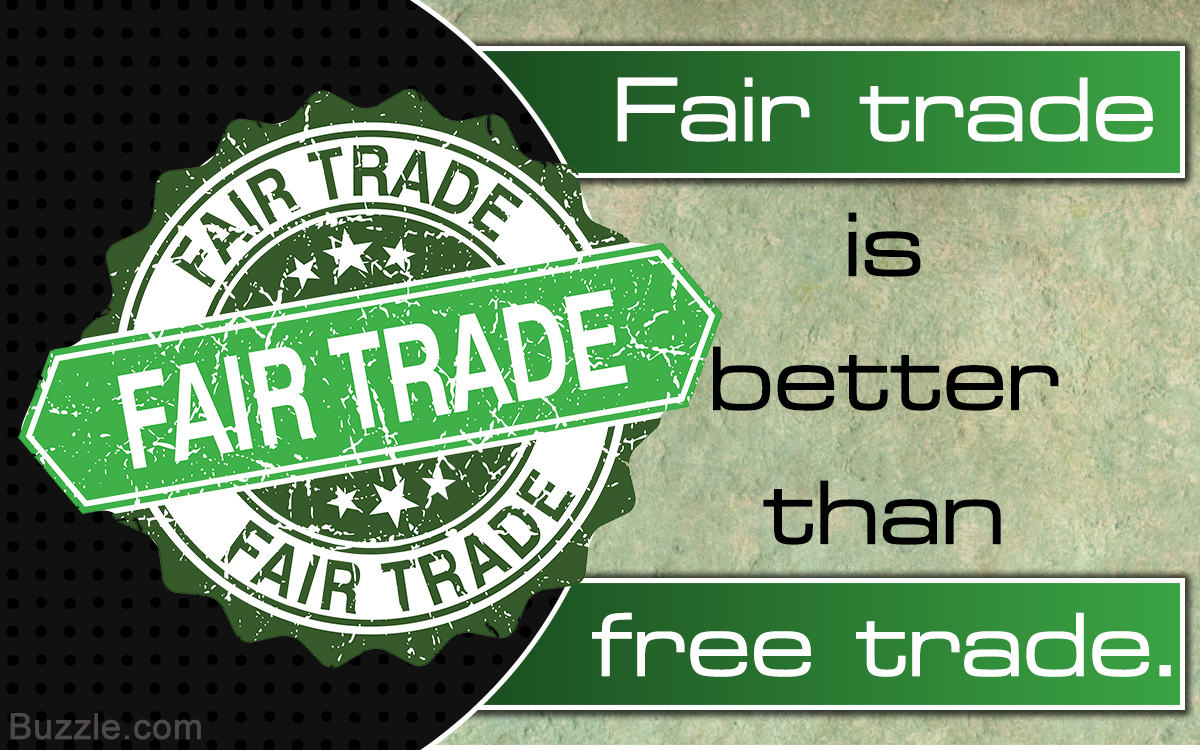 To most of the world, trade liberalization seemed like the answer to a high-price commodity market by encouraging competition among producers. However, there were those who opposed such a market autonomy. Fair trade was proposed to safeguard producers from developing countries. However, corporates began using it as a disguise for their less than fair practices. With an analytical view of free trade vs. fair trade debate, let’s infer which one is really better.

In the struggle for commercial co-existence and ecological sustenance, several trade policies have been formulated in view of globalization. This was initiated with the signing of General Agreements on Tariffs and Trade (GATT) at the UN Conference for Trade and Employment, in 1947. Its objective was to promote free trade among member countries by reduction of tariff burden on importers. When the ethical values of such a practice were questioned, fair trade came into being. These two concepts of commerce between countries are often confused with each other and there are many misconceptions surrounding both ideas. But, do you know what is the difference between free trade and fair trade? Or, which one is better? You may have heard about increasing industrialization creating environmental destruction and may have also witnessed heavy advertising of products and services. This is a result of free trade which is widely practiced all around the world. You may be paying a lower price for a product because the cost of production was brought down to a minimum by paying minimum wages to the workers employed, but not every low-priced product is a result of free trade and not every high-priced product is an output of fair trade.

Here is a condensed illustration of free trade vs. fair trade that aims to understand why producers engage in free trade, who is benefited from it, and which form of trade is better.

WHAT IS FREE TRADE?

Free trade is liberalization of trade with no government interference in the form of regulations, tariffs, quotas or taxes, which allows producers to yield, manufacture or sell their products within as well as outside domestic frontiers.

This helped producers to price their products at lower rates which further stimulated competition. On the downside, benefits like tax holidays and subsidies to domestic producers were also withdrawn. Unrestricted flow of labor, materials, goods and funds prompted several countries to enter free trade agreements.

Free trade is advantageous for consumers because increased competitiveness due to the presence of international producers compels domestic producers to deliver high quality products at reasonable prices that are at par with the competition. The consumer is empowered with the ability to choose from a wide variety of the same product. In the absence of the free trade act, consumers had limited choices in the market. Free trade came under fire because it led to monopoly in the international markets by corporations originating in developed countries that took advantage of the ‘no government intervention’ policy. A grave matter of concern is the cost of damage to the environment that will accumulate overtime and the consumer will ultimately pay a heavy price for it in the long run which far outweighs the benefits of low-cost wide-variety products.

The main objective of adopting free trade markets was to bridge the gap between the poor and the rich, stimulate economic growth and raise the quality of life. Corporations engaging in free trade have been accused of exploitation of farmers, especially those belonging to poorer countries, by coercing them to cultivate only profitable crops and paying them meagerly. If produce does not conform to the company’s desired standards, it is rejected and farmers are not even partially paid for growing the crop on demand. The concept of free trade may sound very lucrative and it may come across as a viable trade mechanism that brings all the market forces to perfect balance. However, this very idea is contradicted by the fact that not everyone involved in this process is given equal opportunity by means of fair access to resources.

☀ Prompts relocation of businesses.
☀ Exploitation by MNCs and international organizations.
☀ Given rise to sweatshops.
☀ Payments are made after approval of goods.
☀ MAY lead to labor exploitation, meager wage rates, inhospitable and hazardous work conditions, compromised product quality, poor safety measures, income inequality, degradation of the environment, and wastage of resources.

WHAT IS FAIR TRADE?

The concept of fair trade was developed and enforced to help producers from developing nations to compete with products manufactured by their counterparts in developed countries so that they are not marred by the lack of support to garner adequate resources for production.

This was a counter approach to free trade. This means that their products may be sold at above average prices to direct maximum profits towards such farmers, manufacturers or businessmen with the aid of the government. It enabled producers from developing countries to reach the final consumers by eliminating the middlemen from the supply chain to sell their products.

One of the most popular crops sold under a fair trade agreement is coffee. Other industries commonly practicing fair trade include paper recycling, chocolate making, handmade textiles, and the craft industry. Soon, further government intervention may see prices of fair trade goods being brought to the levels of other commodities sold in the market. This will remove the price constraint that earlier prevented consumers from purchasing more of such products. This will greatly encourage farmers in developing nations to increase production under fair trade. Floating of currency is not allowed.

Countries practicing fair trade aim at protecting domestic producers. Women and the disabled are greatly benefited by the fair trade policy as they are paid fair wages for their work. The government provides support to producers by extending credit, training and advanced technological equipment. Fair trade truly seeks to bring a balance between producers belonging to developed, developing, and under-developed countries.

VERDICT: Profitable for producers in a developing economy. Also beneficial for consumers if prices are not significantly higher than products not manufactured under fair trade. Also prevents environmental damage.

Free Trade Vs. Fair trade: Let’s take a look at some important points of comparison between free trade and fair trade presented below.

Conclusion – Which One is Better?

Ultimately, all governments aspire to achieve ‘fairness in trade’ to solve many issues plaguing the trade market through free trade or fair trade, whichever matches their belief system. However, from the above, the points highlighting the ‘what should be’ and ‘what is’ aspect of both approaches clearly indicate that fair trade is better than free trade.

Even the marketing approach of goods produced under free trade and fair trade are largely distinct. While free trade aims at attracting more consumers to increase sales turnover and generate more profits, fair trade aims at educating the consumers about the benefits of producing goods without the exploitation of labor or the environment. Thus, fair trade mainly thrives on the demand created by the consumers for such products. Often, fair trade products may not be labeled so because labeling has not been made mandatory by most governments. However, free trade products may be labeled as being “recycled” or “sustainably cultivated” but it does not mean that these products were produced with fair means. According to the Fairtrade Labeling Organizations International (FLO), in the year 2009, the sales turnover of fair trade products was €3.4 billion, showing an upward trend. Fair Trade has helped 1.2 million farmers so far by providing adequate infrastructure to improve living conditions and garner sufficient funds to harvest crops since the past 40 years. Several studies conducted by Hicks and Basu indicate that consumers that are less price sensitive are willing to pay extra for products manufactured under fair trade to support such a trade practice that improves the living conditions of those producing their food and promote economic development.

If a trade approach cannot solve problems of both sides, the developed and the developing nations as well as the producers and consumers, it is ineffective in fulfillment of the objectives for which it was formed. It must be noted that fair trade has often been criticized by economists for being a means to cover up an inefficient market system. Deemed as the world’s largest food and nutrition company – Nestle came under fire in 2005 when it was also dubbed as the globally ‘least responsible company’ for its role in provoking the coffee crisis that left millions of coffee producers cash-strapped. To improve its public image, the company ran a fair trade for coffee campaign called ‘Coffee with conscience’, in 2007. The heavily promoted advertisements stated that Nestle was trying to enhance the living condition of farmers affected by low coffee prices (the fate brought upon by the company itself).

Internationally recognized consumer brands like Sainsbury, Cadbury, and Starbucks have already initiated a fair trade conversion process for their products. The government’s efforts to effectuate a prosperous economy can be achieved by the co-existence of free trade and fair trade. The latter can help bring poor farmers and producers at par with their affluent counterparts so they may participate in free trade with equal opportunity. This can only be effective on the condition that producers do not resort to unethical ways to bring down costs. This will give rise to a globally effective trading system.