Hearsay evidence is not admissible in a court of law, but there are various statutory exceptions for this rule. Here is a brief overview about the rule and its exceptions, along with some examples. 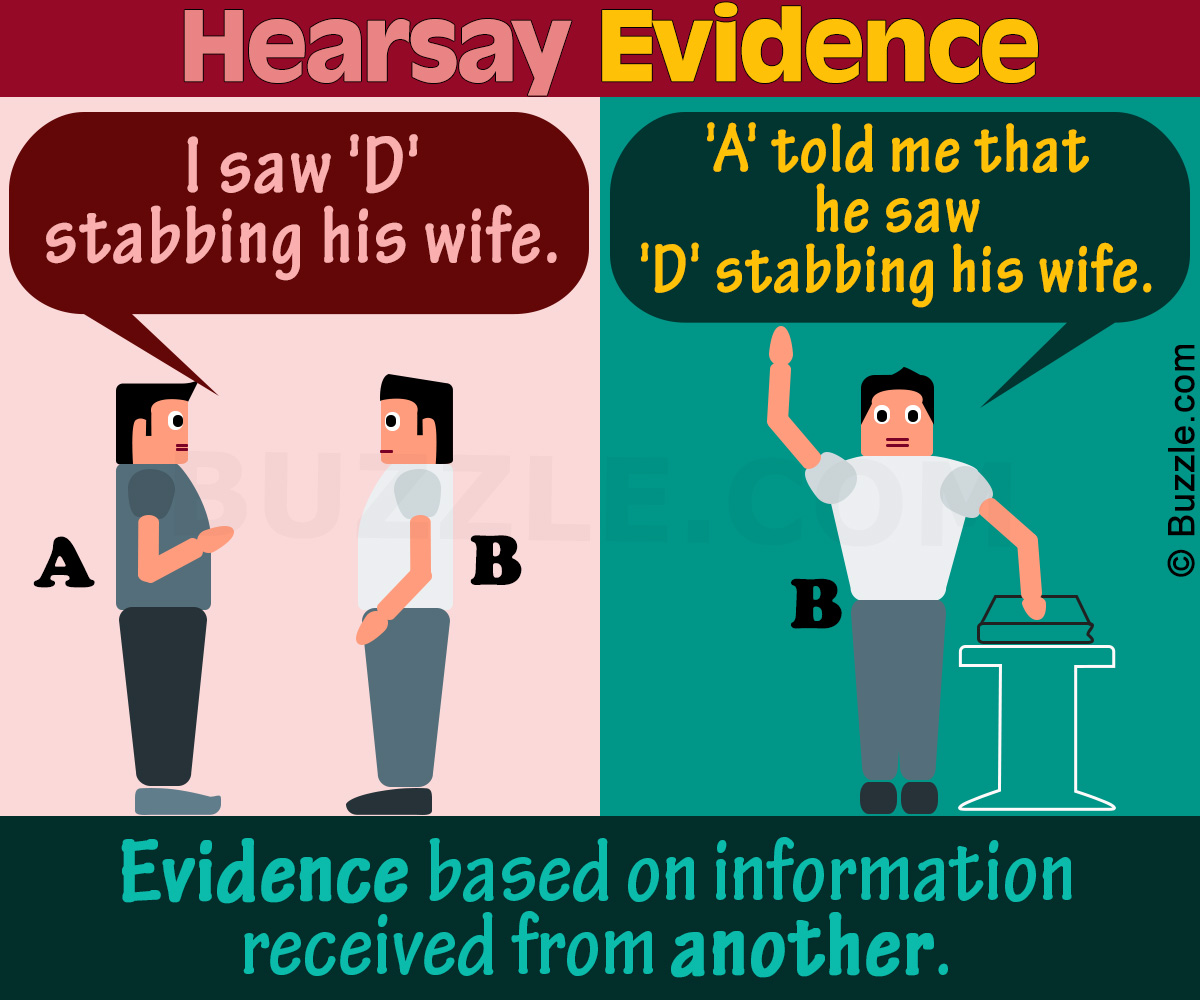 Hearsay evidence is not admissible in a court of law, but there are various statutory exceptions for this rule. Here is a brief overview about the rule and its exceptions, along with some examples.

It is a common misconception that hearsay evidence is about out-of-the-court oral statements. In fact, this type of evidence applies to oral or written statements, and written documents made under oath.

When it comes to legal disputes, evidence plays a vital role. Evidence includes different things presented before a court, so as to prove or disprove the facts in dispute. Legally speaking, evidence is a broad term that encompasses witness testimonies, fingerprints from a crime scene, documents like contracts and wills, and many more things. Evidence is classified into different types, like physical evidence, circumstantial evidence, hearsay evidence, etc.

What is Hearsay Evidence?

The word hearsay means something heard from another person, rather than directly. Legally speaking, hearsay evidence is nothing other than the evidence offered by a witness, about which he/she does not have any direct knowledge, but is based on what others said to him/her. It is defined as follows: “Testimony about out-of-court statements that involve someone other than the person that is testifying.” Hearsay evidence applies to both oral testimony and written documents.

Example 1: A tells B that he saw D administering poison to C. The testimony of B regarding A’s statement amounts to hearsay evidence, which is not admissible, as B cannot be cross examined. It was not B who made the statement. In this example, B is the witness and A is the declarant, who is the person who makes the out-of-the-court statement. Example 2: A tells B that he saw C killing D. B shares this information with E. If E testifies before the court regarding A’s statement, such a testimony amounts to double hearsay, as it consists of two out-of-the-court statements.

Though the concept of hearsay evidence sounds simple, it is really complicated with several statutory exceptions. Though a testimony of a witness amounts to hearsay evidence, such a statement may become admissible, if it falls under any of these exceptions.

The Federal Rules of Evidence (F.R.E.) provides around 30 exceptions to the hearsay rule. According to F.R.E. 801, “Hearsay is a statement that the declarant does not make while testifying at the current trial or hearing; and a party offers that statement in evidence to prove the truth of the matter asserted in the statement”.

So, in order to be classified as a hearsay evidence, the statement of the witness must be assertive (intentional communication of fact); made out of the court by the declarant; and is meant for proving the matter asserted therein. If the purpose of the statement is anything other than proving the matter asserted therein, the statement will not be counted as hearsay evidence. For example, B’s testimony in the court goes like this: C told me that he saw A kill the victim of the case. This amounts to hearsay, as the statement offered into evidence was made by an out-of-the-court declarant, and it is intended to prove the matter of what it asserts (A killed the victim).

Exceptions to the Hearsay Rule

Exceptions to hearsay rule are classified into three categories. The first category deals with those exceptions that apply irrespective of the availability of the declarant as a witness. The second category deals with the exceptions that apply only if the declarant is not available as a witness. The third category consists of exclusions that may fit into the definition of hearsay evidence, but are admitted on special grounds.

Given below are some of the commonly applied exceptions to the rule of hearsay evidence.

Excited Utterances/Spontaneous Statements
Unplanned statements made by a person (declarant) in response to a startling or shocking event falls under this category. In other words, the declarant (not the witness) must be under some kind of stress while making the statement. Examples: “Please help. A stabbed me”. ; “That man stole my handbag”. The testimony may become admissible, if the witness had only ‘heard’ the declarant’s statement.

Present Sense Impressions
This exception is about a spontaneous statement that conveys what the declarant is experiencing at the moment that immediately precedes or succeeds a particular event. For example, A and B were chatting, when they saw their neighbor D, moving fast on a skateboard. B told A, “Look, D is really fast and careless”. Within seconds, D collided with an elderly lady, who suffered severe injuries. The testimony of A regarding B’s statement falls under this category. The statement must be made within a few seconds or minutes before or after the event in question.

Admissions
If a party to the case makes an out-of-the-court statement, thereby admitting his guilt or liability, such statement may be admitted as an exception to hearsay evidence. For example, if A makes a statement to B that, “The fault is mine. I should have been more careful while driving on that road. The accident could have been averted”. If B, as a witness, offers this statement as evidence, it may be admitted, though it is hearsay.

Former Testimony
In some cases, a party may seek introduction of a past testimony from a previous proceeding, where the witness had testified under oath and was also cross examined. If the witness is unavailable during the current proceeding, his past testimony may be admitted as an exception to the hearsay rule.

Dying Declarations
This is another instance where the declarant will not be available to testify. Dying declarations are sometimes admitted as evidence, especially in civil cases.

Forfeiture by Wrongdoing
This is an exception to the hearsay rule, and is applied when a party to the case, intentionally or wrongfully makes the declarant unavailable to testify. If a hearsay evidence is admitted under this exception, the party claiming the exception must prove the wrongdoing of the other party.

In short, hearsay evidence is not admissible, but can be admitted, if it falls under the statutory exceptions. Rules regarding hearsay evidence are more or less similar in most states, as they are made in line with the F.R.E rules. However, slight variations are not uncommon.