Tourists Beware! These are the Most Dangerous Countries in the World

The most dangerous countries in the world are the nations who engage in civil wars, have a low GDP which in turn gives a terrible economy, high crime rate, and oppression of human rights. This article educates its readers about such countries and why people should avoid traveling there...

Home / Uncategorized / Tourists Beware! These are the Most Dangerous Countries in the World 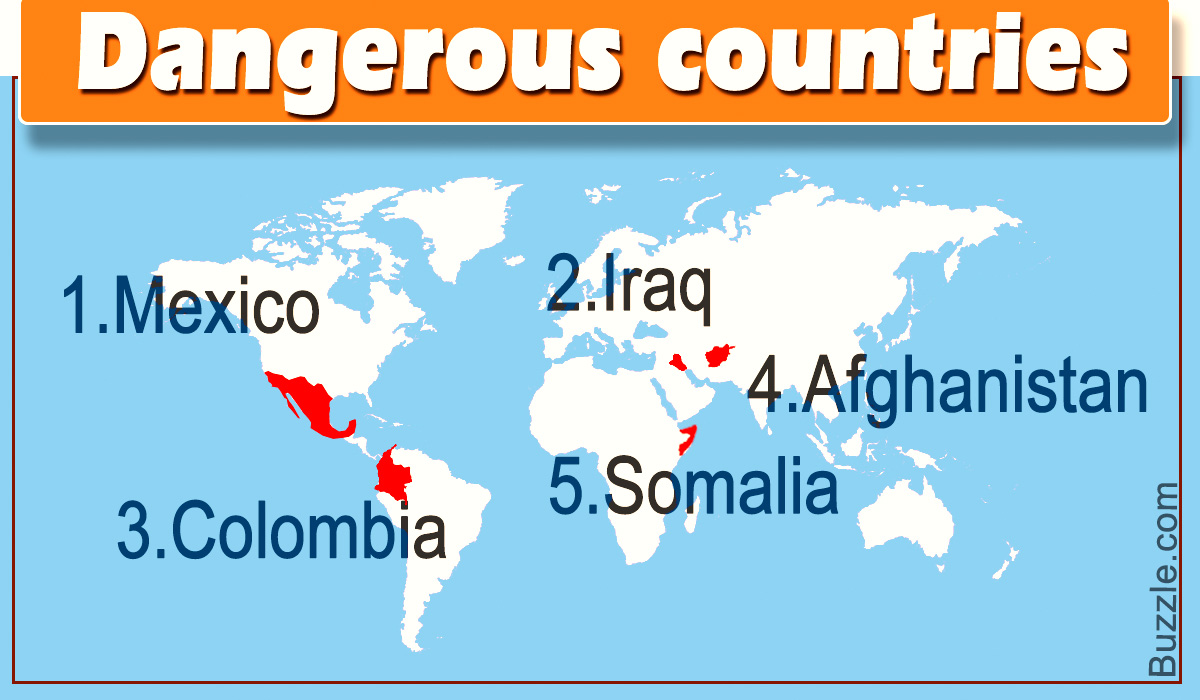 The most dangerous countries in the world are the nations who engage in civil wars, have a low GDP which in turn gives a terrible economy, high crime rate, and oppression of human rights. This article educates its readers about such countries and why people should avoid traveling there…

Most diplomats in the world address press conferences saying that their country is one of the most secure countries in the world. Tourists are safe and will leave with happy memories. Many people make plans for vacations, but they forget to see whether this country is actually safe. Sure, the world has become a better place, and humans have become more secular, but everyone doesn’t respect secularism. Here are the names of countries which travelers should avoid going at least for some years.

Though the country has one of the most beautiful beaches, the increasing drug cartel vs police war has been the cause of many issues in Mexico. The US government has been advising its citizens to avoid Mexico because of the increasing instability in the country. The country is a large market for drug trade and witnesses drug related wars and murders on a daily basis. Most resorts and tourist spots are not safe due to the lack of government control which leads to a rise in crime and violence.

No one is safe in Iraq. Despite the rich oil reserves that makes this country one of the richest in the world, the nation is torn in war, violence and confusion. Since the US invasion of 2003, nothing has been stable in Iraq. The civil war began which led to the deaths of more than 700,000 civilians. The country is filled with insurgents from many terrorist groups like Al-Qaeda and many more which use people as suicide bombers and keep blowing innocent civilians and countless US soldiers.

This nation is known for its enormous drug trade and kidnapping cases. Every year the country witnesses more than 1000 kidnappings and most victims are killed by their captors even after the payment. Colombia is ranked fourth in the world for murders. Mayors and diplomats are killed in dozens every year. This country is also the main center for drug trade as it supplies more than 80% of the world’s cocaine.

It’s one of the most dangerous countries and the current government instability is not helping the ongoing American-Afghan crisis. Even today people live in fear and wrath of the Taliban. Many security experts say that during the Soviet invasion (1979), the Red Army had planted more than 10 million land mines all over the country and till today this causes deaths and injuries of thousands of civilians. Suicide bombings are very common and it’s largest exporter of top quality hashish and opium.

Pakistan is certainly not a travelers paradise. The news of the hideout and killing of Osama bin Laden shows how weak is the security system of this country. Pakistan has also witnessed the murder of Daniel Pearl, assassination of former Prime Minister Benazir Bhutto, and the bombing of the Marriott hotel which show how dangerous the country is for innocent travelers and civilians. Pakistan is a beautiful country, but today the country is a safe haven for terrorists and gangsters in the world.

Desperation, death and kidnappings are synonymous with Sudan. This country is also a major hub for terrorist organizations. Some of the world’s most wanted men have come from Sudan and started their crime career here. Violence is always on high and the two civil wars have killed more than 3 million people.

Known as the ‘Rape Capital of the World’, HIV is very prevalent in this nation. People remember South Africa as the home of Nelson Mandela, the country with a rich varied wildlife, various diamond mines and the host of the recent FIFA World Cup. Although the crime rate has fallen way down, people still need to exercise some caution while traveling to South Africa. Visitors are advised not to roam on the streets in the night as the chances of getting attacked by anti-social elements is very high.

Although its known to be one of the most preferred tourist destinations of the world, people need to be cautious when they are visiting Brazil. Getting mugged is an everyday occurrence because of the high rate of poverty. The streets of Sao Paulo and Rio de Janeiro are famous for muggers who are waiting with a broken glass bottle to extract some money from travelers. Just to earn some money people indulge in drugs, prostitution, murders, and rape.

This country is always in the news for its infamous Somalian pirates. Somalia is a nation which is in urgent need of a government; the country has been unstable since the civil war broke out in 1999. By the end of 2009 more than 700,000 people were living under the protection of UN welfare agencies. With no rules and regulations, piracy has also become one of the biggest problems, and the constant fighting between tribes to take over the land causes infinite deaths on a daily basis.

Both these countries are engaged in heavy war since the formation of Israel in 1948. Israel is the only Jewish majority country in the world and many Arab countries have refused to identify it. Since then many wars have been fought between Israel and neighboring Islamic countries. Israel and Palestine have fought many wars primarily for land which have resulted in many deaths of civilians and soldiers of both the countries.

Lastly, we come to the biggest nation on the planet; Russia. It’s a place where crime is a common occurrence and it never gets less because the government doesn’t rule anymore and the mafia has become the unofficial dictator. There are more gangsters than cops in this country and according to statistics, 84 murders take place every 24 hours in Russia. If travelers survive the terrorists bombing, then there are high chances of getting kidnapped by kidnappers and mafias for heavy ransom.

Some other names of most dangerous nations in the world are the Ukraine, Syria, US, India, Venezuela, China, etc. Crime is present in almost every country in this world and the task of being a crime free country just seems almost impossible looking at the current conditions. However, if countries start solving their internal matters like unemployment, poverty and illiteracy the rate of crime can be brought under control.