A recessionary gap occurs when the actual GDP (gross domestic product) is lesser than the GDP at full employment. The OpinionFront article below outlines the definition of a recessionary gap along with its causes, effects, and potential solutions. 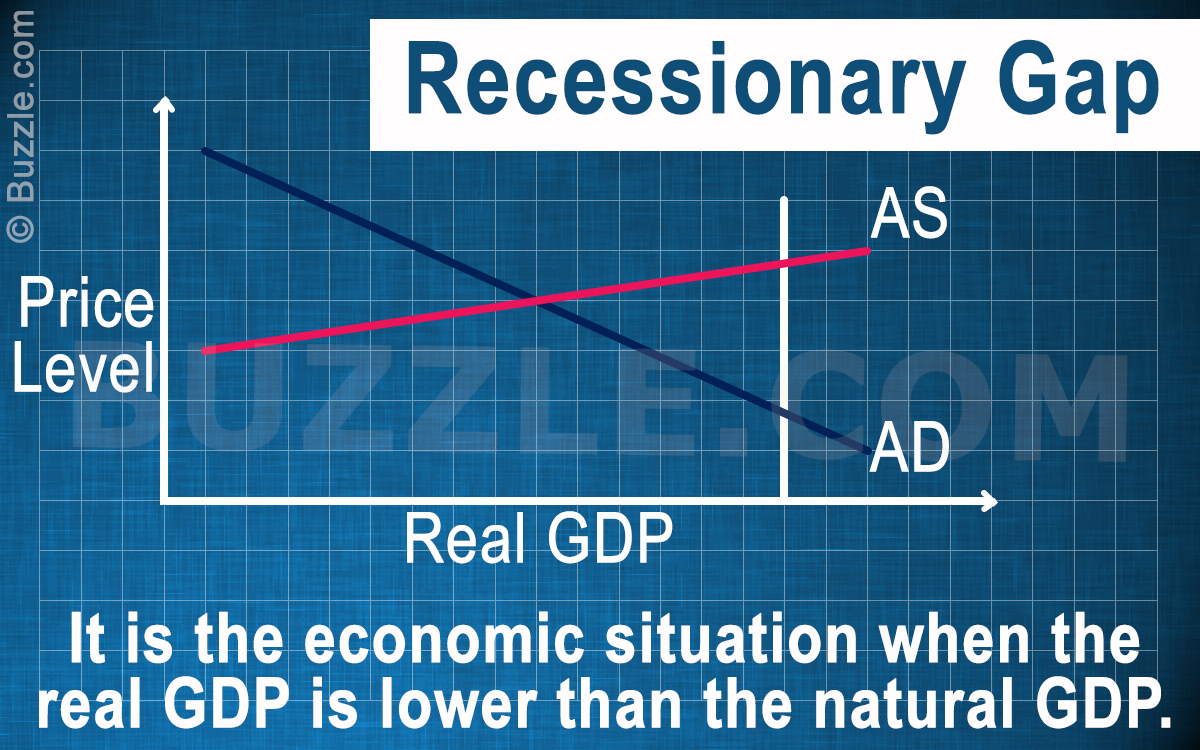 A recessionary gap occurs when the actual GDP (gross domestic product) is lesser than the GDP at full employment. The OpinionFront article below outlines the definition of a recessionary gap along with its causes, effects, and potential solutions.

✦ It is caused due to high price levels.

✦ It generally leads to cyclic unemployment.

✦ To eliminate a recessionary gap, government spending should be increased.

It is in the best interests of every country to have a stable economy. But economic conditions have a tendency to fluctuate, and a deteriorating economy can be one of the worst situations a nation can undergo. The discipline of macroeconomics comprises a number of terminologies for varying economic conditions. A recessionary gap is one such term.

✦ Also known as a contractionary gap, a recessionary gap defines the difference between the GPD at full employment and the actual GDP.

✦ To put it simply, economic equilibrium exists when demand meets supply or the amount of labor equals the quantity supplied. In such a case, the actual GDP will meet expectations, with required raw material and full employment.

✦ When a recession approaches, the economy begins contracting, resources are priced high, and there is considerably lesser workforce.

✦ Thus, the GDP at such a time will be lesser than what it could have been, had there been a price equilibrium. This situation is defined by means of a recessionary gap―the potential difference between the actual GDP and the possible GDP.

✦ Mathematically, the calculation varies―firstly, as per the method used to demonstrate the concept graphically, and secondly, as per the numbers (price, wages, GDP, etc.) used in question.

✦ In general though, the formula can be considered as the one mentioned above.

✦ If the answer is negative, there is a recessionary gap.

✦ The concept has been outlined in the graph below.

✦ The difference between the real GDP and the potential GDP is thus negative; this is called a recessionary gap. In such a scenario, the current unemployment rate will be more than the natural unemployment rate.

Causes of a Recessionary Gap

Excess population and recessionary gap are directly proportional to each other. With a large population, the country requires more resources and income. Reduced global trade and other factors lead to increased unemployment.

The government may introduce changes in the tax structure. When taxes are increased, the average citizen experiences a dip in the household budget. Expenditures are curtailed; consequently, this leads to an overall recessionary gap.

When prices of goods increase, their demand and consumption may reduce. In fact, price fluctuations mainly affect the aggregate demand curve, leading to a recession.

Effects of a Recessionary Gap

A recessionary gap is an indication of a recession; consequently, people are ready to work for a lower wage. There is a smaller staff than usual, since companies cannot afford to pay wages that are at par during full employment. This leads to a gradual increase in unemployment.

When unemployment and reduced output coexist, the economic situation is bound to be unstable. There is lowered earning and reduced growth.

A recessionary gap primarily leads to a business cycle contraction. With low foreign trade, increased taxation, and other factors, businesses lose their stability. There is a gradual meltdown of economic activities.

Solutions for a Recessionary Gap

✦ Usually, a recessionary or inflationary gap is allowed to return to an equilibrium at its own pace. However, there are alternative solutions to improve the same.

✦ Closing the recessionary gap using fiscal policy or monetary policy are two of the most common solutions.

✦ Monetary policies involve increase in the supply of capital and reduced rates of interest by the Federal Reserve System.

✦ It involves increasing the aggregate demand by means of increased government expenditure and reduced taxation.

✦ An expansionary policy is one of the stabilization policies employed to reduce the recessionary gap.

✦ Once taxes are reduced and circulation of money increases, there is increased consumption, and naturally, an increased aggregate demand.

✦ This change in aggregate demand is depicted in the graph below. The output achieved by the economy increases as well, thus reducing the recessionary gap.

✦ A nonintervention policy indicates a gradual closing of the recessionary gap. In this case, we witness a change in the short-run aggregate supply curve, as shown in the graph.

✦ With a natural shift in the wages (until it reaches the employment level at equilibrium), the aggregate supply curve undergoes periodic shifts. This change is allowed to continue until the output increases and the economy moves towards an equilibrium.

Consider that a country has a GDP of USD 20 billion at full-employment level. If the current GDP of the nation is USD 12 billion, there is a recessionary gap of USD 8 billion.

Consider an automobile manufacturing company. If there is recession, it means that the company is not producing as much as it normally does at full-employment level. There is lower demand for workers, and the company turnover is not at an equilibrium. If, at equilibrium, the income is around USD 1.5 million, and the current income is USD 1 million, there is a recessionary gap of USD 0.5 million.

Recessionary as well as inflationary gaps generally come to a close as the regular price levels return to an equilibrium. This certainly requires time and adjustment, and implementation of the right measures.