20 Strange Last Wills and Testaments You Should Read

For most people, making a will or testament is all about sharing all the accumulated wealth with loved ones or giving back to the society. But some people make testaments that will make you literally question their sanity. These totally strange last wishes make for a rather interesting read. Have fun!

Home / Uncategorized / 20 Strange Last Wills and Testaments You Should Read 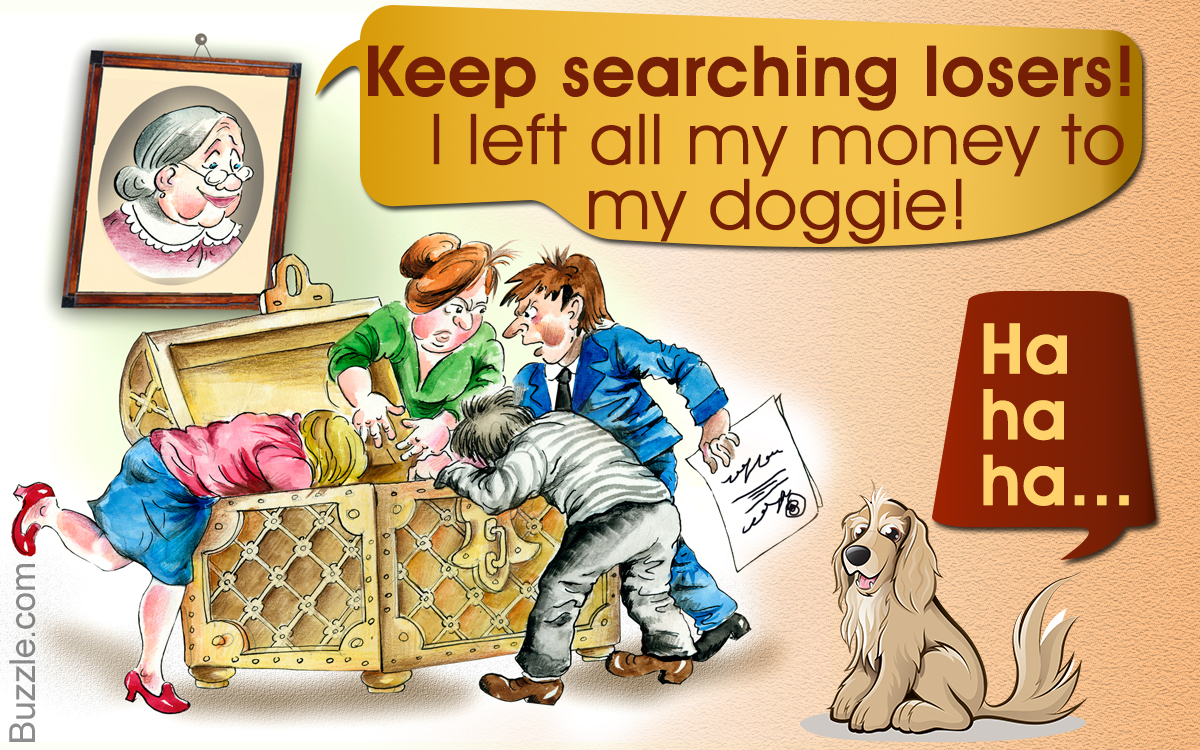 For most people, making a will or testament is all about sharing all the accumulated wealth with loved ones or giving back to the society. But some people make testaments that will make you literally question their sanity. These totally strange last wishes make for a rather interesting read. Have fun!

Much Too Much!
You can’t just make a funny testament for the sake of some laughs or to get back at someone. There are certain things that cannot be forced on any individual just for the sake of your will. Your will can be challenged in the court and canceled as well!

Death is just a part of life, or should I say end of life. We may have collected immense wealth and property but you just gotta leave all that behind. Most choose to distribute everything amongst their children or donate to a charity.

Well, that is what normal people declare in their will or testament. But there are people who will be remembered because of their crazy last wills! After going through the list you might question the sanity of some of these.

The list is definitely an entertaining one, and if you are looking for quirky ways to make your own will, you’ll get lots of inspiration! Read on.

Trouble has no trouble!

Leona Helmsley, who died at the age of 87, left a $12 million trust for her dog Trouble. The trust, which will be managed by her husband, will provide for a luxurious life for her Maltese. She wanted her husband to ensure that Trouble got the best and everything was very well taken care of. After all, why should the pampered pet suffer after his owner’s death. We don’t know how much the “caretaker” husband got!

Imagine attending your own funeral, creepy right? But that is exactly what 24-year-old Angel Pantoja wanted, and got too! With special embalming his body was preserved for 3 days, and was made to stand with some support. With the Yankees cap and sunglasses, it appeared as if Angel was happily welcoming guests at his own funeral. Imagine the very person, whose funeral you are attending, welcoming you. Preferable to give this one a miss, isn’t it?

People can go to any extent to take revenge, Samuel Bratt’s will just proves that. He left 330,000 pounds for his wife, but with the condition that she should smoke at least 5 cigars everyday! What? Yeah, apparently Bratt’s wife did not allow him to smoke, so, to get back at her he included this clause in his will. Brutal, we say!

T M Zink, an attorney who died in 1930, made a will that all his savings should be used to build a library. So far so good. But, he had one condition, it should be a “womanless library”. He had such a strong dislike for womankind that he mentioned in his will, that the library will not have works by any woman, nor will any woman be allowed inside it. Every entrance was specifically supposed to have a sign that said “no women allowed”. Fortunately, his daughter challenged the will, and this horrible library was never built.

Heinrich Heine, a poet who died in 1856, left all his wealth to his wife Eugene. But he had one condition, she should remarry. You must be thinking what a noble man he was! But the reason was anything but noble! According to him the reason he put this clause in his will was, “Because then there will be at least one man, who will regret my death.” Apparently his wife was uneducated and boring. And yes, she did get married and got all his estate. We don’t know if her husband regretted Heine’s death, he must have loved the money though!

Why be confined to earth when you can go beyond. Gene Roddenberry, the creator of Star Trek wanted “to boldly go where no man has gone before”. His ashes were scattered into space by a Spanish satellite in 1997, fulfilling his last wish. Even his wife joined him in space after her death.

All of you will want a friend like Janis Joplin after reading this. In her testament she declared that $2,500 should be given to her friends to splurge on a rocking party at her favorite bar. The reason was fairly simple, “so my friends can get blasted after I’m gone.” What a thoughtful friend!

Now this is a truly touching and romantic last wish. Jack Benny, who died in 1974, paid a florist to send a single long-stemmed rose everyday to his wife. Although their marriage was far from perfect, his wife was lucky enough to get a reminder of his love for the next 9 years that she lived. Awww!

Dorothea Edwards, who died at the age of 80, had just one last wish. She wanted her pacemaker to be donated to an animal. A person cannot donate his/her pacemaker to another person, but there are no restrictions about animals. Thus, a German Shepherd got a new lease of life. The poor dog had a congenital heart defect, and after the pacemaker was successfully implanted, she lived out a healthy life.

This one tops the list of strange wishes by a huge margin. John Bowman, who died in 1891, believed that his wife and two daughters, who had already died, would reincarnate with him. So, basically the entire family will come back together to the house. He kept a trust fund of $50,000 to ensure that fresh meals were cooked in his mansion everyday, in case the Bowman’s are hungry when they get back. A total waste of money and food. What a pity!

It is good to love your pet or animals for that matter. But imagine building an entire house for cats, with amenities like dining hall, auditorium, special roof for playing, and even an exercise room! All this for cats! Looks like being a cat is not that bad after all! Jonathan Jackson, who died in 1880, believed that “It is man’s duty as lord of animals to watch over and protect the lesser and feebler.” Thus, this luxurious house. I hope the cats had a good time in this special palace.

Imagine being paid to make babies. Yup, that is exactly what Charles Vance Miller did. This Toronto attorney stated in his will that the Toronto woman who will give birth to most children, in the 10 years after his death, will get $500,000. Yup, that much for procreating! The contest ended up in a tie as four ladies birthed nine children each. They were rewarded with $125,000 for their, umm…efforts!

Henry Budd died in 1862 and left £200,000 in his testament to his sons. But, he had one condition, his sons will get the money only if they don’t grow a mustache. We don’t know why the guy had such intense hatred for facial hair.

Napoleon Bonaparte wanted his head to be shaved and hair distributed to his friends as his last wish. I doubt if his friends were very happy to receive this special token.

This lady deserves a lot of respect. Eleanor Ritchey left $14 million for 150 stray dogs in her testament. The dogs were very well taken care of, and after their death, the remaining money went to an institute which carried research on canine diseases.

Fred Baur the founder and owner of Pringles wished that he should be cremated, and his ashes buried in a Pringles tube. His will was honored by his children.

Luis Carlos brought happiness in the lives of 70 random strangers by distributing all his wealth amongst total strangers. He just chose them randomly from a phone directory. We seriously need more people like this!

William Shakespeare’s last will stated that his “second best bed” should be given to his wife, Anne Hathaway. We don’t know what he did with his best bed though! He even had a inscription on his grave that said, “Blessed be the man that spares these stones, / And cursed be he that moves my bones.”

Escape artist Harry Houdini wished to check if it was possible to contact the dead, so he asked his wife to hold spiritual sessions every Halloween after his death. She did respect his testament and held such seances for 10 years. Houdini had even given her a secret code to connect, but alas his wife never heard from him.

Mark Gruenwald was the executive editor of the Iron Man and Captain America comics. He stated in his will that his ashes should be mixed with the ink used to print comic books. And yes, his last wish was fulfilled. He will always be connected to what he loved, even after death.

So, what do you think? These sound better than the normal boring testaments, right? If you have any such strange ideas or have heard about more such bizarre wills, do let us know!