Understanding the True Difference Between Tort and Criminal Law

The basic purpose of tort law and criminal law is to maintain an orderly society and to protect the citizens from wrongful acts. However, these two branches of law are different in their own ways. 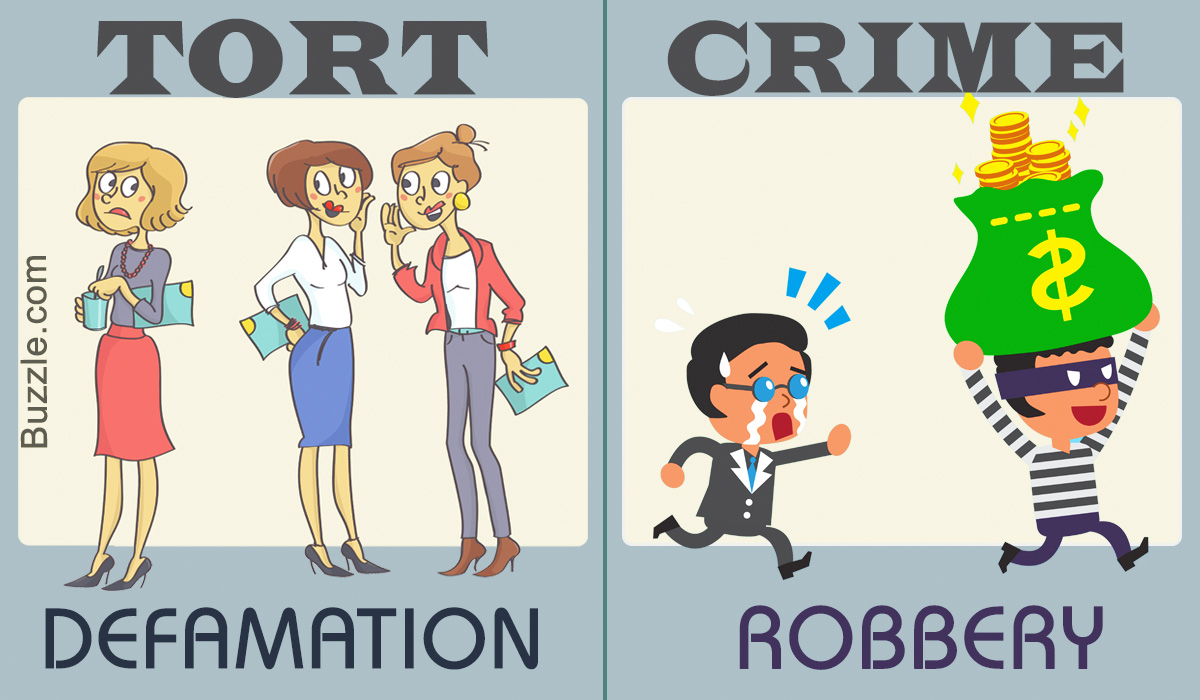 The basic purpose of tort law and criminal law is to maintain an orderly society and to protect the citizens from wrongful acts. However, these two branches of law are different in their own ways.

When compared to tort law, penalties are more severe in criminal law. Though tort law aims at providing compensation to the victim; punitive damages are also awarded in special cases.

Almost all jurisdictions have enacted laws for protecting the citizens from wrongdoings, which are classified as crimes and torts. Both criminal law and tort law are intended to punish the offenders and deter others in society from indulging in such wrongdoings. If both crimes and torts are wrongful acts that are against the interests of society, then why are they treated differently? In fact, crimes and torts are different in various ways. In order to find out the difference between torts and crimes, you have to understand their meanings.

A tort is defined as a wrongful act or an infringement of a right (other than under contract) leading to civil legal liability. So, breaching a legal right of a person, thereby causing harm to his person or property is called a tort.

Every person has a legal duty to respect others’ legal right and not to infringe such rights. Defamation is an example of a tort in which the reputation of a person is damaged by another. So, tort is a private wrong that affects the person or property of an individual. It is a civil wrong for which the aggrieved party may sue the wrongdoer for damages, according to tort law.

In short, certain acts are classified by the state as crimes, and committing such acts gives rise to criminal liability. Robbery is an example of a crime. So, a crime is a public wrong, which is considered as a wrongdoing against society as a whole. It is a criminal wrong, for which the wrongdoer is punished by the state, according to criminal law. Given below is a comparison of torts and crimes, and the laws regarding these wrongdoings.

◾ Both criminal law and tort law are used for taking corrective action against wrongdoers. As torts are wrongdoings against individuals, tort law is aimed at providing redress to aggrieved parties and deterring people from committing torts. The main purpose is to compensate the victim for the harm he/she suffered.

◾ Crimes are considered as wrongdoings against the state or society as a whole. Certain acts are classified by the state as crimes, and such acts are forbidden by law; as they threaten public safety and welfare. Though a crime may have created an immediate victim(s), the state is considered as the ultimate victim; because a criminal (like a robber) can be dangerous for any person in society if he is let loose. So, the main purpose of criminal law is to protect society from crimes.

Action Against the Wrongdoer

◾ In case of torts, the aggrieved party or the victim can sue the wrongdoer in a civil court, seeking damages for the harm suffered by the former. The person who initiates such an action is called the plaintiff, and the person who is sued is called the defendant.

◾ According to criminal law, the state is responsible for charging a person with a crime. The state is represented in the court by the prosecutor, who conducts the case. So, the action against the wrongdoer is initiated by the victim in case of a tort, whereas the state initiates such action in a crime.

◾ Unlike criminal law, tort laws are mainly based on common law and precedents. The wrongdoer is ‘sued’ for a tort. Though the Seventh Amendment offers the right to jury trial for defendants in civil cases, it is not commonly awarded in case of torts. In case of standard of proof in torts, evidence has a greater weight. The golden rule is ‘preponderance of the evidence’, which means the plaintiff must have convincing evidence to prove the case. Most of the constitutional clauses that offer protection to the defendants in criminal cases are not available in torts.

◾ As mentioned above, the state has classified certain acts as crimes. So, criminal laws are mostly based on statutes made by the legislature. The defendant is ‘tried or prosecuted’ for committing a crime. According to the Sixth Amendment of the United States Constitution, the defendants have the right to jury trial in criminal cases. When it comes to the standard of proof, crimes have to be proved ‘beyond a reasonable doubt’. Crimes require a higher level of proof, and the prosecutor must prove the crime beyond a reasonable doubt. There are various constitutional clauses that offer protection and support to defendants in criminal cases. They include double jeopardy, ex post facto law, right to speedy trial, right to counsel, etc.

◾ In tort law, the wrongdoer is liable or not liable to pay damages for the tort committed. The defendant has to pay compensation, as decided by the court, on the basis of harm suffered by the plaintiff. The right to appeal is available for both the defendant and plaintiff.

This is only a brief overview about the basic differences between tort law and criminal law. There are certain wrongdoings that amount to crimes as well as torts. In such cases, the victim can initiate a civil case against the defendant for damages. For example, the victim of assault may file a civil suit seeking compensation for the damages suffered. In short, it can be said that the ultimate aim of both laws is protection of citizens.