An Easy Understanding of Government Monopoly With Examples

Home / Uncategorized / An Easy Understanding of Government Monopoly With Examples 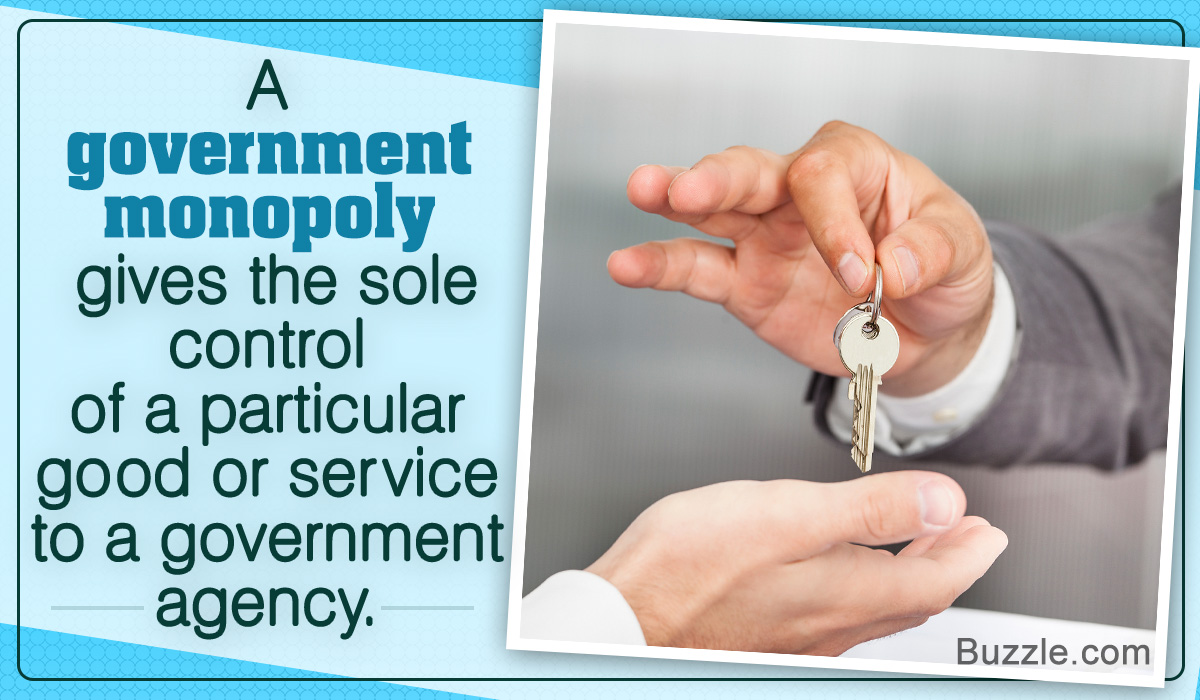 In 1998, software giant Microsoft was sued by the US Federal Government, along with 20 state governments, for becoming a monopoly.

A monopoly is an enterprise that can claim the complete ownership of a particular service or product in the market. Since this reduces the number of choices available to consumers, and is unfair to the competitors of the enterprise, this term is generally used in a negative sense in economics. However, sometimes, a monopoly can be a valuable tool for the government in providing cost-effective services to the general population. Such monopolies are called government-initiated monopolies, which can be of two types – government monopolies and government-granted or government-created monopolies. Though this article deals with government monopolies, it will also tell you the main difference between the two types of monopolies named above.

A government monopoly is when the complete control of a particular market―comprising goods or services―is handed over to a government agency. This is accompanied with regulations which prohibit competition from other companies for that particular good or service. It is also known as a public ownership or monopoly.

This type of arrangement is often confused with what is called a government-granted or government-created monopoly. In this type of monopoly, the government invests the sole right of a particular resource, good, or service, with a private individual or enterprise, rather than with itself. What is similar in both cases is that, competition for the concerned market is banned by laws, regulations, and other methods of enforcement.

In a government monopoly, business decisions are taken by government authorities. These monopolies may be at the level of a national, state or local government. They are generally created, owned, and run by the government, though, in some cases, the government may only be an investing partner.

The only advantage of such monopolies is that, they help keep costs low, and provide services which are widely accessible to the general population. They are not affected by market constraints, which helps keep out price rise.

In a free market, competition between different companies ensures a better service for the customer. The lack of such competition is a major disadvantage of government monopolies.

In such monopolies, there is no incentive for any improvement in the product or service offered, which is another drawback for consumers.

In private firms, stockholders can take action if the management is poor. But such accountability does not exist in case of enterprises run by the government, where a customer can only render his disapproval by exercising his voting rights.

The USPS is a branch of the US Federal Government. This agency handles postal delivery within the country, and has the exclusive rights to deliver first-class and standard mail delivery. Private firms have been prohibited from offering the same services.

In Scandinavian countries like Iceland, Norway, Sweden, and Finland, alcohol consumption is a hotly-disputed issue, especially regarding road safety. So, beverage industries in these countries are monopolized by the government, resulting in liquor sales being allowed only in authorized stores, and that too in a limited quantity. Other private stores are not allowed to intrude into this market.

Public schools in several countries, such as the US and UK, are funded and managed by local and territorial governments. In the US, the expenses of operating these schools are obtained by taxation, and they draw many students who are put off by the selectivity and high tuition fees of private educational facilities.

The Canadian healthcare system has been monopolized by the government, and competition from private facilities is strictly prohibited. The very few facilities that are allowed are government approved ones. The principle by which it operates is that, the majority of its citizens should receive a particular standard of healthcare, free of cost.

The nuclear sector in India is strictly monopolized by its union government. At present, private industries are not allowed to set up nuclear plants, and the entire nuclear domain is supervised by the Department of Atomic Energy, which reports to the prime minister. Nuclear energy is the fourth-largest source of electricity generation in the country.

Public utilities include the services which are essential for daily life, such as water, gas, and electricity supply. These utilities require an abundance of natural resources like gas deposits and very expensive infrastructure. That’s why, in many countries like USA, these industries are under the government domain, controlled by public utility commissions which are located in its various states, like the Alabama Public Service Commission, the Delaware Public Service Commission, and so on.

Countries with substantial natural resources, like oil and natural gas, often monopolize these industries under the national government. This is because, these countries depend to a large extent on oil exports for their annual revenue, and the industry requires high investment, which can only be provided by the national government. Examples of such government monopolies include the Saudi Arabian-owned oil company Aramco and the Venezuela-owned PDVSA.

After achieving independence in 1947, coal mining in India was carried out by both, public and private enterprises, until 1973, when government decided to nationalize all private firms owing to their poor working conditions & economic losses. Coal India Limited is both, the world’s and India’s largest coal producer, contributing to more than 80% of annual coal production in the country. However, in 2014, the national government passed a bill seeking to draw private firms into coal mining sector.

After the end of alcohol prohibition in 1933, the US state of Pennsylvania relegated the control of alcohol manufacture, possession, and sale to an independent government agency, called the Pennsylvania Liquor Control Board. Only stores licensed by the Board, called ‘state stores’, are allowed to sell alcoholic beverages. Besides, the grant of licenses is regulated by the government based on county populations. Utah is only other US state to have similar restrictions.

Bus services offered within specific counties and localities, in most countries, have often been monopolized by state-owned corporations. Private companies are prohibited by law to provide the same kind of transport services. However, these services have been criticized, especially in developing countries, for poor customer satisfaction and the unavailability of funds for maintenance. This has led to a demand for privatization.

In hindsight, government monopolies are vital in providing essential services like healthcare and public utilities at little to no cost, but they have also been criticized for reducing healthy competition in the market.