While some promises are legally enforceable, some others are not. Illusory promises fall under the latter category. Here is a brief overview of such promises and their enforceability. 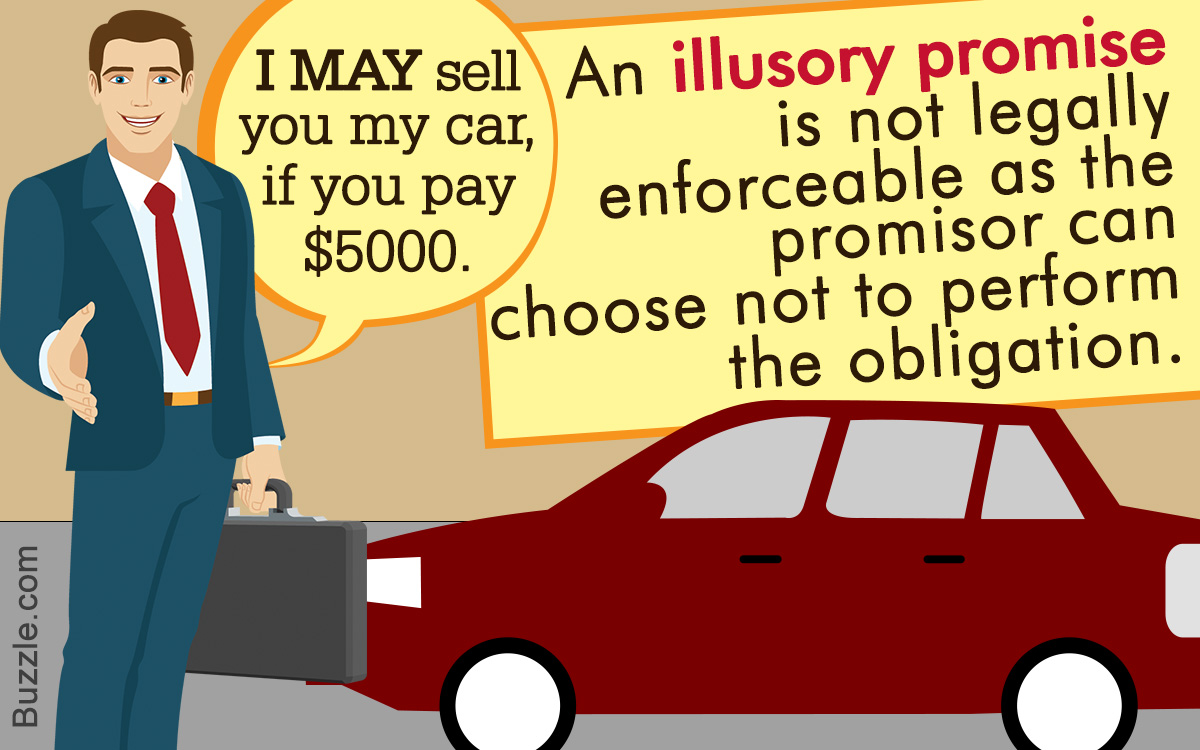 While some promises are legally enforceable, some others are not. Illusory promises fall under the latter category. Here is a brief overview of such promises and their enforceability.

If a party to a contract has a unilateral right to modify the terms and conditions, without giving notice to the other, or without the latter’s consent; the contract can be declared null and void, as it is considered as an illusory promise.

In legal context, promises are linked to contracts. In simple terms, a contract is defined as a legally enforceable promise/set of promises. If a party to a contract promises something in exchange for the performance of the other, it is a unilateral contract; and if the parties exchange promises, it is a bilateral contract. A valid contract must have some kind of consideration, which has some value that can be determined.

A permits B to use his garage, provided B drives A to work every day. In this case, mutual promises constitute consideration. In bilateral contracts, mutuality of obligation is an important requirement. In other words, both parties are bound by obligations created by the contract.

According to the rule of mutual obligation, the promises made by both parties to the contract, must be supportive of each other. Such promises must be real and meaningful. However, in some cases, a party to a bilateral contract may not be bound by the contract. One such instance is illusory promise, which allows the promisor to escape his obligation.

Definition: According to Black’s Law Dictionary, an illusory promise is defined as a promise that appears to be binding but in fact it is not. Such a promise is so indefinite and vague, because performance of one party is optional. An illusory promise does not amount to consideration, and fails to create a contract. Hence, it is not enforceable.

In an illusory promise, the promisor may retain the right to change his mind, as shown in example 4. The promise can be vague as in example 2. The promisor is not clear about what he meant by the word ‘satisfactory’. In some contracts, the promisor may retain the right to terminate or modify the contract as and when he wishes to. This is also an illusory promise, as the party can rescind or modify the contract at any stage. In that case, if there is another clause that requires a reasonable notification (for at least 30 to 60 days), the contract becomes valid and enforceable.

In general, courts follow the view that the parties to a contract had the intention of creating a valid contract. So, courts tend to avoid interpreting contracts as illusory promises. The doctrines of good faith and promissory estoppel are used by courts to construe illusory promises as enforceable contracts.

Good Faith: There are numerous cases, wherein courts have applied the doctrine of good faith to construe illusory promises as valid contracts. The court may interpret the terms of the contract and the actions of the parties in such a way that it becomes a valid contract. For example, contracts with the satisfaction clause are usually considered as illusory promises. However, courts have ruled against this trend, by invoking the doctrine of good faith. So, the promisor must back out of the contract only if he is genuinely dissatisfied.

The defendant appealed and the appellate court ruled that the contract is not enforceable, as there is no mutuality of obligation. It was held that there was no promise from the side of the plaintiff regarding his performance. The plaintiff appealed to the Court of Appeals of New York. The court ruled that, “A promise may be lacking, and yet the whole writing may be ‘instinct with an obligation,’ imperfectly expressed. The acceptance of the exclusive agency was an assumption of its duties. The law has outgrown its primitive stage of formalism when the precise word was the sovereign talisman… it takes a broader view today.”

To conclude, an illusory promise may sound like a valid contract, but it is not. It cannot be enforced in a court of law, for lack of mutual obligation, which constitute the consideration in bilateral contracts. However, nowadays, courts take a different view and try to interpret facts as well as laws to bring illusory promises within the ambit of enforceable contracts. This is done in cases, where justice is denied to the aggrieved. If you find yourself involved in such a case, consult an expert attorney who can guide you in this matter.