What Does Aggravated Assault Actually Mean in Criminal Cases?

If simple assault is an act of violence that generates a fear of imminent bodily harm in the victim; aggravated assault is a severe form of assault that involves serious bodily injury. Here is a brief overview of this crime. 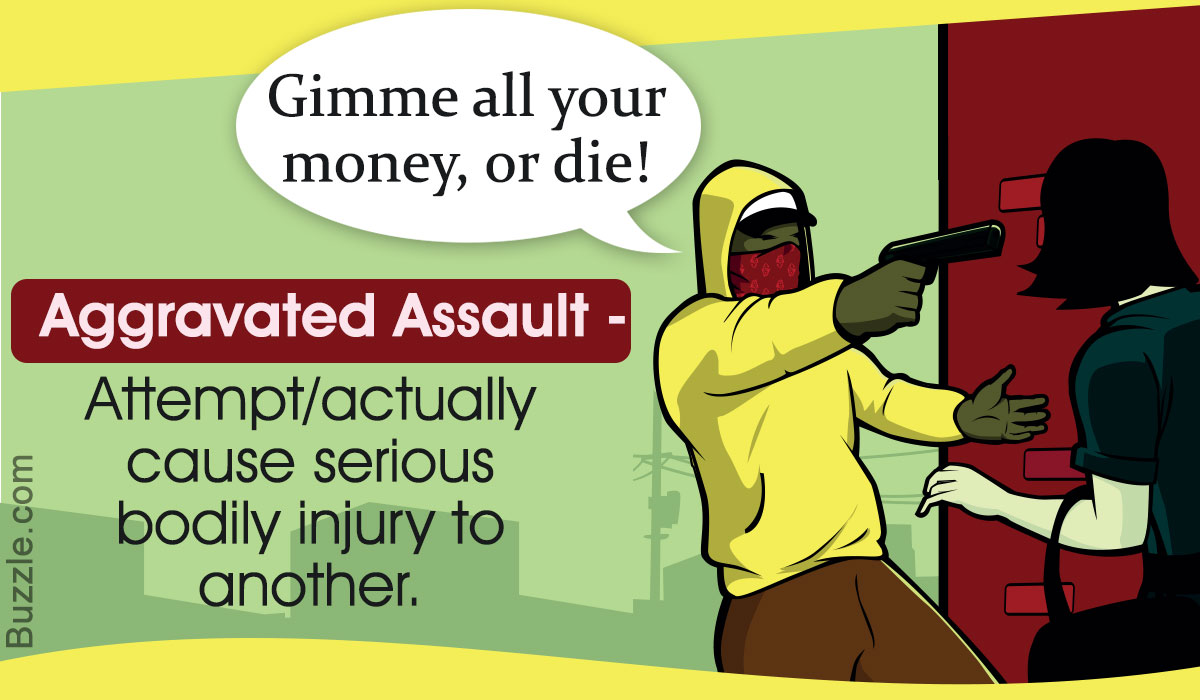 If simple assault is an act of violence that generates a fear of imminent bodily harm in the victim; aggravated assault is a severe form of assault that involves serious bodily injury. Here is a brief overview of this crime.

According to the 2013 Crime Statistics released by the FBI, the arrest rate for aggravated assault in the country during the year, was 118.8 per 100,000 inhabitants.

Law can be broadly categorized into two sections – civil and criminal. Civil law deals with private wrongs, i.e., disputes between private parties. Such wrongs include torts or violation of contracts, and they affect the person or property of private individuals. In case of a civil wrong, the aggrieved party approaches the court for redressal in the form of damages (compensation).

Unlike civil wrongs, criminal wrongs or crimes are those acts that are classified as wrongs against the state and are forbidden by law. According to law, such wrongs threaten public safety and welfare. In case of a crime, the state files action against the accused. If the charge against the accused is proved, he is punished with imprisonment, fine, or even death penalty.

What is an Assault?

So, most of the wrongful actions are classified as civil or criminal. However, there are certain acts that can give rise to both civil and criminal liability. In other words, certain acts are considered as civil wrongs as well as crimes. Assault is one such act that can be a civil wrong and a crime, at the same time. It is defined as an act that creates an apprehension of imminent bodily harm, in another person.

Simple assault involves threatening to cause imminent harm, and may include touching the person or causing minor bodily harm to the victim. The main elements include the wrongful and intentional violent action of the accused, and the extreme fear generated in the victim due to such action. Such a threatening action is considered as assault, and if the action causes bodily harm, it is considered as battery. However, this distinction is not accepted in some states, where both these actions (threatening as well as causing bodily harm) comprise a single wrongdoing – assault.

What Does Aggravated Assault Mean?

Use of a Deadly Weapon

Aggravated assault is often done with the intent of committing a serious crime, with a deadly weapon. Even a small knife can be considered deadly, if it was used in such a way, to cause serious harm. If the assailant places the knife on the neck of the victim, while threatening the latter, the action may amount to aggravated assault. So the circumstances of the case matter, while framing charges against the accused.

Identity of the Victim

Is Aggravated Assault a Felony?

While simple assaults are treated as misdemeanors, aggravated assaults are often considered as felonies that are classified as serious crimes. Penalties for aggravated assaults depend on factors like the gravity of the offense and the state in which the crime was committed. In some regions, where these crimes are treated as misdemeanors, the punishment may include a fine of around $150 to $500 and an imprisonment term of four months to one year. If considered as a felony, a person accused of aggravated assault may be punished with a fine of up to $10,000 and an imprisonment term of up to 20 years. A convicted felon may not get a job easily, and is not entitled to basic rights. He may not be allowed to renew any professional license.

In short, aggravated assault is considered as a serious felony. If you are charged with that offense, consult an experienced criminal attorney to conduct your case. Stay away from such crimes and avoid the repercussions.