What is a Kleptocratic Government and Why People Hate It?

Kleptocracy is an informal term for a kind of government that thrives by constantly plundering the state's treasury. Buzzle sheds light on what a kleptocratic government is, and what its characteristics are.

Home / Uncategorized / What is a Kleptocratic Government and Why People Hate It? 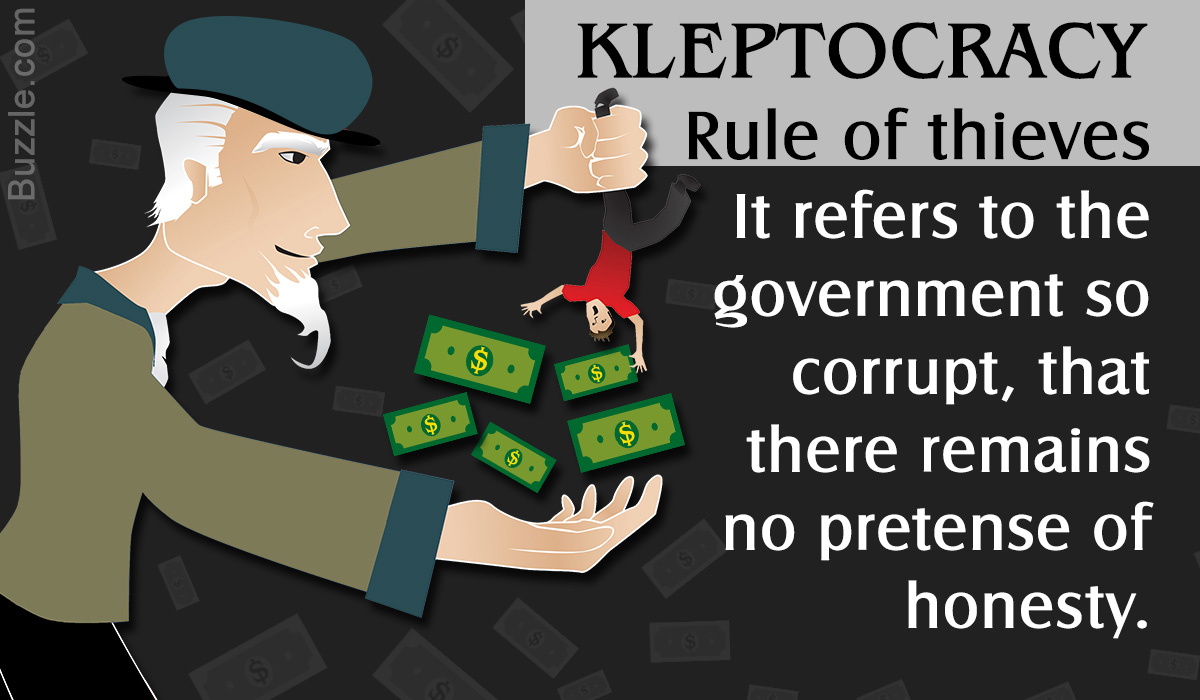 Kleptocracy is an informal term for a kind of government that thrives by constantly plundering the state’s treasury. Buzzle sheds light on what a kleptocratic government is, and what its characteristics are.

The generals of the Roman Empire were known to seize treasures and extract tributes from the citizens, in order to become wealthy. Owing to this, the Roman Empire was arguably one of the oldest kleptocracies in world’s history.

Kleptocracy, also known as cleptocracy or kleptarchy, is essentially a term used to describe a form of government, which is so corrupt and incompetent that there is absolutely no transparency whatsoever. The term itself has been derived from two Greek words―kleptēs, meaning thief, and kratos, meaning rule, which when brought together, literally mean “the rule of thieves.” Although a pejorative and an informal term, it elaborately denotes a government mechanism, wherein the common people are burdened with heavy taxation so that the rulers and their cronies can amass enormous amounts of money in their personal accounts. Such a governance is typically characterized by a large-scale embezzlement of funds from a nation’s treasury.

How Does Kleptocracy Thrive?

The rise of a kleptocratic regime in a state or nation amounts to a major portion of government funds winding up in the hands of a few corrupt officials, with no attention given to the development of the state and its people. Usually, a situation of kleptocracy arises when a government is particularly of an authoritarian nature. An authoritarian government is the one that is typically characterized by an absolute and unquestioning obedience to the ruling authority. Such a regime is headed by an individual who is not elected by people, but rather, often exercises brutal means to control the state, such that people submit to his rule more out of fright than out of respect.

Authoritarian regimes have been broadly divided into three types, viz. monarchy, in which a ruler is determined by his birth in a particular clan or dynasty; oligarchy, in which a group of a few powerful and wealthy people control an entire nation; and dictatorship, in which one person forcefully takes over the country (in most cases) and often uses unfair and unethical means to dominate the masses. It has been observed that an authoritarian ruler appoints his/her close friends and relatives as his/her subordinates, and hence, all the corrupt and unethical practices that take place are sort of an in the family affair. This gives rise to a ruling class, which then can freely access and (mis)use government funds according to its personal will. Since this ruling class is in possession of all the power, the misappropriation of funds, more often than not, goes undetected and unnoticed. So, despite the fact that the citizens do pay heavy taxes, which are supposed to be utilized for the development of the state, it is rarely done so by corrupt government authorities.

Some economists opine that kleptocracy also tends to take root in a country, where common people have a lot of money. Malpractices, such as bribery and money laundering take place on a large scale in such a state, as the government authorities, who possess the power to allow or disallow people to take up certain important projects, very well know that the citizens are capable of paying them large sums of money, in order to get their work done. Kleptocratics act, then make their way through all the levels of the socio-political system of a nation, such that they tend to become its part and parcel. Moreover, the common masses of such a country tend to gradually become habituated to such an immoral system, and with the passage of time, nobody seems to find anything wrong in it, even if they have to experience a large number of hardships.

Characteristics of a Kleptocratic Government

To quote Lord Acton, “Power tends to corrupt, and absolute power corrupts absolutely.” This is, indeed, very apt in case of a kleptocratic regime, wherein those who hold power consider it to be one of their fundamental rights to rob the state’s treasury and divert all the money, in order to enrich their personal lives. Some of the typical salient features of a kleptocratic government are as under:

✧ Kleptocracies are almost always associated with corrupt authoritarian regimes, as mentioned above. The government authorities exercise complete power and control over the nation’s funds and other resources.

✧ The personal transactions that people in power carry out, go unnoticed. Because there is nobody to question the embezzlement of state funds, the treasury of the state often comes to be treated as the personal account of a kleptocrat(s).

✧ One of the most commonly observed features of a kleptocratic rule is that “plundered” public funds are often secretly transferred to secret, personal bank accounts in other countries. This is considered to be the easiest way of accumulating “illegal” money, owing to the fact that the legislation of the other country may not allow the home country to access information about the monetary reserves in their banks.

✧ Almost by definition, kleptocracy refers to a “weak state.” In such a state, rulers often have to confront the other “strong people”, who need to be either contained, eliminated, or pacified. These threats are often brought by political leaders through means of corruption.

✧ In many cases, these “strong people” are also given the “right” to use some part of the state’s treasury and certain powers for their personal gains. Corruption and malpractices then become prevalent at all levels from the top to bottom.

✧ Kleptocracy is also characterized by plundering and illegal trading of the nation’s natural resources, such as land. More often than not, people are displaced from their homes so that the land that they have been occupying can be sold at higher profits by kleptocrats. The money, thus earned, then goes into the kleptocrat’s own pockets.

In a nutshell, kleptocracy amounts to systematic plundering of a nation’s money and resources. The most visible determinant of the presence of kleptocracy in a particular nation lies in the economic divide between the political authorities and common people. One can clearly see the poverty and hardships suffered by most people vis-à-vis the lavish lifestyle of the government authorities.

Kleptocracy is known to exist all over the world in varying amounts. However, some countries are known to have absolute kleptocracy.

✧ Perhaps, one of the most frequently cited examples of a brazen kleptocracy is that of Zaire. Mobutu Sese Seko, the President of the Republic of Congo (which he renamed as Zaire in 1971) from 1965 to 1997, is known to have brought about a systematic diversion of state’s funds and mineral resources for his personal gains. He is also known to have allegedly transferred $100 million in his personal bank accounts in Switzerland and other European countries every year. Sources tell us that Mobutu’s immediate subordinates also plundered the nation to a great extent, so much so that the country’s police, soldiers, and street-level executives often went unpaid for months together.

✧ The next example that can be cited in this respect is that of Sierra Leone. Sierra Leone became independent in 1961, and Albert Margai was its Minister of Agriculture, then. In his efforts to buy off his rivals, Margai caused the virtual collapse of the agricultural export sector of his country. In 1964, he was appointed the second Prime Minister of Sierra Leone. At this time, he allegedly skimmed off enormous profits from smuggled diamonds and used a part of this amount to bribe his political allies, thus, crippling the nation’s treasury even further.

✧ François Duvalier, also known as ‘Papa Doc’ Duvalier, was the President of Haiti from 1957 to 1971. His rule was characterized by absolute kleptocracy. After securing himself by ruthlessly crashing the opposition, including the army, Duvalier went on to divert large blocks of public money for personal gains. He made it mandatory for all Haitian citizens to purchase state lottery tickets, and filled his personal accounts with the income, thus, earned. There are many reports telling us how he also engaged in outright extortion, wherein he held wealthy businessmen hostage in the presidential palace until they promised to buy worthless government securities or gave Duvalier a share in their businesses.

It needs to be noted that although widespread corruption and minimum development are the two most obvious determinants of a kleptocratic regime, there also appear to be a number of exceptions. One cannot completely deny the presence of kleptocrats in the socio-political system of a nation, which has made technological and infrastructural advancements. Take Malaysia, for instance. Despite the prevalence of corruption in the socio-political machinery of Malaysia being a known fact, one cannot deny the tremendous amount of technological and economic progress the country has made. Therefore, irrespective of the fact that kleptocracy is an inherent part of the world’s political scenario, whether or not a particular government can be termed as truly kleptocratic in nature, depends on the amount of state funds utilized for public benefits.