The Meaning of Aggravated Battery Explained Perfectly With Examples

Intentionally touching another in a harmful or offensive manner, amounts to battery. When combined with aggravating factors like use of a deadly weapon, or serious injuries to the victim; the act becomes aggravated battery. 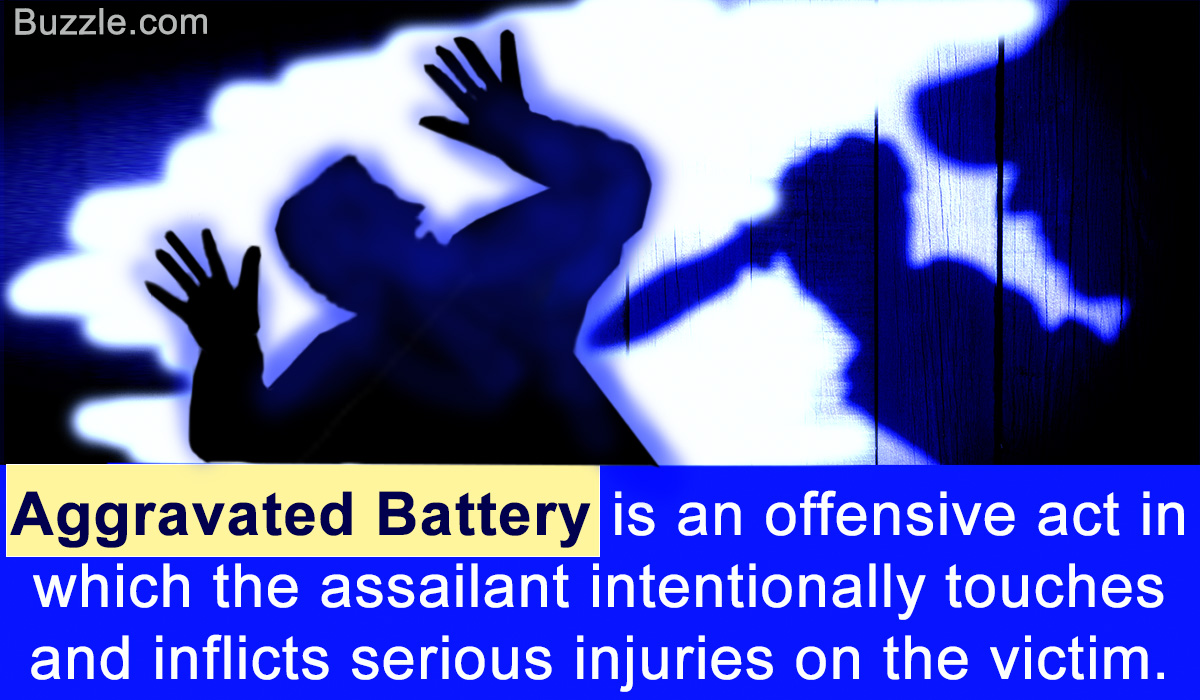 Intentionally touching another in a harmful or offensive manner, amounts to battery. When combined with aggravating factors like use of a deadly weapon, or serious injuries to the victim; the act becomes aggravated battery.

Though a car is not a deadly weapon, it can be used as one, so as to cause serious injuries to the victim of aggravated battery. In such cases, the prosecution has to prove that the car was used in such a way, that is likely to cause serious bodily harm or death.

Like assault, battery is also an unlawful act that can give rise to both criminal and civil liability. It is a crime for which the accused can be charged and tried. At the same time, the victim can file a civil suit against the accused, in case of any damage. Assault and battery are among those legal terms that are used interchangeably. While some jurisdictions consider them different; in others, both assault and battery are one and the same. This article is about aggravated battery, which is a serious form of battery.

Laws regarding battery may vary from one state to another. In general, battery is defined as unlawful use of force against another person, resulting in harmful or offensive physical contact. While assault is an act that causes fear of imminent bodily harm in the victim, battery involves offensive physical touch that may or may not cause bodily harm.

It can be said that battery is a serious form of assault; or assault is an attempted battery. If a person raises a bat and threatens another, the act is assault. If he actually hits the victim, the act is battery. The elements of battery include intentional and unlawful use of force by the assailant, offensive or harmful physical touch with the victim, and lack of victim’s consent. Such an act amounts to simple battery, which may cause minor injuries.

What Does Aggravated Battery Mean?

In some states, the crime of battery is divided into different degrees according to the gravity of the case. Some jurisdictions take a different approach and classify the crime into two types – simple and aggravated. While simple battery involves a less severe act with or without minor injuries, aggravated battery refers to a serious crime, which causes great bodily harm to the victim, or involves use of a deadly weapon.

So, presence of one or more aggravating factors can transform a simple battery into a serious crime of aggravated battery. Such factors include use of extreme force or a deadly weapon by the assailant, serious injuries sustained by the victim, and attacks on protected class of citizens. Shooting a person using a gun is an example of aggravated battery. Likewise stabbing with a knife or strangulating with a rope, etc., amounts to this crime. Aggravated battery against a household member is a serious crime. If found guilty, the accused in such cases may be required to undergo a domestic violence offender treatment or intervention program, apart from the punishment.

Intent of the Defendant

The intent of the accused is a main factor, and it is defined in different ways. Usually, the prosecution has to prove that the act of the accused was intentional or reckless. It can also be argued that the accused has done the act knowingly. In other words, the accused was fully aware of the consequences, at the time of the act. For example, a person who indulges in rash driving hits a pedestrian, who suffers serious injuries. Here the intent of the driver is reckless. An assailant can intentionally hit another, using his car, due to personal enmity. These acts amount to aggravated battery.

Use of a Deadly Weapon

While some weapons like firearms and large knives are considered deadly, in other cases, the prosecution has to prove that the weapon is capable of inflicting serious bodily harm, if used in a specific manner. So, even a baseball bat can be considered as a deadly weapon, if the assailant uses it to cause serious injuries on the victim. So the nature of injuries, the type of weapon used, and the manner in which it is used, are some of the factors that are considered in aggravated battery cases. So, anything ranging from a screwdriver or kitchen knife to a vehicle can be considered as a deadly weapon.

Nature of the injuries is an important factor that decides the fate of the case. In general, a simple battery becomes aggravated, if serious bodily harm (like permanent disability or disfigurement) is caused to the victim. Such bodily harm could be like loss of or serious injury to a limb or a bodily organ, or an injury that requires a long healing period or a long-term treatment or surgery.

Status of the Victim

The accused may resort to self defense. He can argue that the mishap occurred, as he was trying to defend his person from the attack of the victim. He may also argue that he was trying to protect his loved ones or property. He may also try to convince the court that the injuries happened during a mutual combat with the victim. He can plead that he has not committed the crime, and the prosecution has charged the wrong person. The defense counsel can argue that the accused is not mentally sound. The accused may also raise the contention that the act was not intentional, but accidental.

While simple battery is a misdemeanor in many states, aggravated battery is a felony, for which the accused person may get an imprisonment term of up to 30 years, or fine, or both. The laws regarding aggravated battery vary from one state to another. So, the penalties may vary with the location and the nature of the case. In some jurisdictions, aggravated battery may be considered as misdemeanors, if the injuries caused are less severe. There are various factors that can affect the sentence imposed in such cases, and they include the behavior of the accused while committing the crime, whether he/she used a deadly weapon, the manner in which the weapon was used, and the severity of the injuries. Even the prior criminal record and background of the accused, and his relation with the victim, are among those factors that the judge may consider while deciding the case. If the victim falls under any special category, like police officers, elderly people or pregnant women, the accused is likely to get a long prison sentence. The same applies in case of injuries like permanent disfigurement or disability.

To conclude, aggravated battery is a serious crime. Avoid getting involved in such crimes. If you are charged with this offense, consult an experienced criminal defense attorney to conduct the case.