Abortion has always been a subject of tough debate. How easy is it to choose between two rights? While a pro-choice stance supports giving a woman the legal right to take decisions regarding her fertility, pro-life opposes such an action, saying that carrying out an abortion is violating the sanctity of life. In this article, let us see what are the arguments for pro-choice abortions...

Abortion has always been a subject of tough debate. How easy is it to choose between two rights? While a pro-choice stance supports giving a woman the legal right to take decisions regarding her fertility, pro-life opposes such an action, saying that carrying out an abortion is violating the sanctity of life. In this article, let us see what are the arguments for pro-choice abortions… 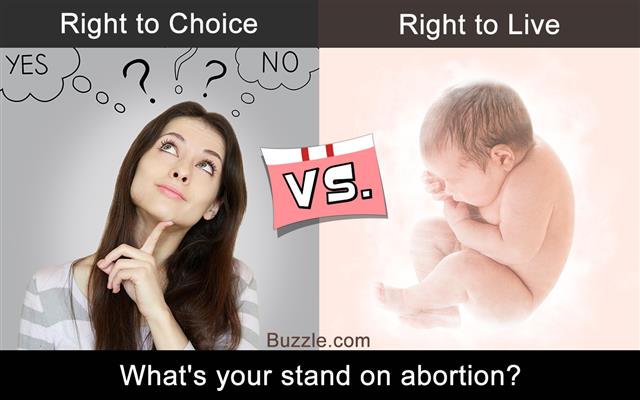 In order to understand pro-choice, let us first understand what gives rise to such arguments. It is the concept of pro-life, which advocates the importance of life over the freedom of choice.

Pro-choice is the freedom of choice that a woman has, to choose whether to give birth or abort her child.

Abortion has been a controversial topic for a long time. In the United States of America, abortion has been made legal for almost any reason, at any stage in pregnancy. Even after the Supreme Court legalized abortion in the United States in 1973, the controversy still continues. The court decided that the fetus, as it cannot live without the support of the mother in the first trimester, has no constitutional rights. While some argue, that the fetus should have the same constitutional rights as that of the mother.

Pro-choice abortion refers to the political and ethical view, that a woman should have complete right over her fertility, and that she should have the freedom to decide whether she wants to continue or terminate her pregnancy. The pro-choice movement entails to guarantee a woman, her reproductive rights. Those who are pro-choice, give the following arguments in support of abortion.

First of all, it is very important to understand why women opt for abortion. Is she being plain cruel? Does she not care about the fetus (her child)? Such questions should be rendered invalid. Absolutely nobody enjoys an abortion. So, why do they abort in the first place?

Women choose to abort due to a lot of difficult circumstances. Nobody aborts without a valid reason. These reasons would include age, society, responsibility, and a lot many other reasons. If a woman is below the age of 21 (at least), she is too young to have a baby. She may be immature, and may not be in a position to take the responsibility of a new life altogether. She may not even be able to provide her child with everything it requires. A minor mother isn’t psychologically ready to handle the responsibilities of a child. With a life to support, many such girls drop out of school and start working, in order to fend for the child. This certainly spells a bleak future for such girls. In such a case, abortion becomes her best option.

Control over her body and the freedom to decide the course of her life is critical to a woman’s civil rights. When a woman is pregnant, it is her body that goes through all the stress of pregnancy. If she decides not to have a pregnancy, she should be able to do so. Denying her the right to her body is violating her most basic freedom.

One of the most pertinent questions regarding abortion is, ‘When does life begin?’. A fetus may be alive, but so are sperms and eggs. It is true that life in every form should be respected. However, should the right of a fetus be greater than that of a woman who, in majority of the cases, would bear the responsibility of the unplanned child?

One of the important abortion facts is that most of the abortions take place in the first trimester, when the fetus cannot live independent of the mother. It depends on the mother, through the placenta and the umbilical cord, for nutrition and health, and hence should not be considered a separate entity.

A lot of care and precautions are taken while carrying out an abortion. Most of the abortions are done during the first trimester, when it is the safest. As a result, abortions pose only 0.5% risk for the woman to develop serious complications. This certainly does not affect the woman’s health gravely or her ability to conceive in the future.

Unwanted teenage pregnancy can have serious complications, if the pregnancy is continued. An adolescent is neither mentally nor physically ready to continue a pregnancy. Talking about responsibility, it is true that everyone is responsible for their own actions. If this is true, then it is also true that the woman did not get pregnant on her own. My point here is, when the man is equally responsible for the pregnancy, why should a woman be the lone sufferer? In a lot of cases, infidelity, and a man not willing to take the child’s responsibility, are reasons why most women are forced to abort. The unexpected pregnancy then becomes an unwanted one too. In situations like these, why is she to blame?

It gets even worse in cases like rape. If the woman was raped, it is definitely something she did not want. Forcing her to bear the added responsibility of the child she conceived through the unfortunate act, would only add to her mental stress. In such cases, why should she pay for another man’s mistakes? Such pregnancies are best terminated. Putting aside the issues that the woman is dealing with, we should also consider the life such children would have. Knowing that they were unwanted, what would their mental state be? How would they deal with the society? How would they feel on knowing about their biological father? Would they be able to live a normal life, under such circumstances? Such things have a major effect on children.

So, the question of responsibility is still unanswered. Is only giving birth and not killing a life, a responsible act? Isn’t providing the child with a good and most importantly, normal life, a part of being responsible? Isn’t abortion the safest and the most practical thing to do here?

While some believe that life begins at conception, there are others that do not believe in this. There are different theories regarding, when life begins. Unless every one can be made to agree to the one point as to when life begins, laws prohibiting abortion would be forcing one theory on all.

Making abortion illegal does not stop unwanted pregnancies from taking place. In case abortion is made illegal, many women may get it done from unauthorized entities. This would pose a greater threat to their life and health. For those who fear that abortion might be used as a contraceptive, there is no reason to panic. Studies have shown that as few as 8% of the women who undergo abortion did not use contraceptives.

Despite all the support for abortion, one of the important pro-choice facts is that those who raise pro-choice issues to strengthen their cause are not pro-abortion. They take the right of a woman’s freedom to her body and life. However, we must remember that abortion should not cloud the sanctity of life. It is important to bear in mind the pros and cons of abortion, before taking any decisions regarding one’s pregnancy.

Pregnancy is not just about continuing a life inside the womb. With life, comes the responsibility of providing it with all the rights and comforts that it is entitled to. While the debate between abortion – pro-choice vs. pro-life continues, it depends on us that we act responsibly, while we deal with creating a life. Only then, we will not find ourselves time and again standing on the crossroads, having to decide whether to continue or terminate a pregnancy.

Life is precious. It is an amazing phenomenon that has made this planet one-of-its-kind in the entire galaxy. Abortion is strongly criticized by those with strong religious beliefs, as they believe that life is a blessing from God. Any attempt to destroy or modify a life is seen as meddling with the powers of the Almighty.

Advocates of pro-life, strengthen their anti-abortion arguments by saying that life begins at conception itself. Hence, abortion is tantamount to homicide. Pro-life advocates also give forth the argument, that the widespread acceptance of abortion may help it to be used as a form of contraception. They also point to the medical complications and post-abortion syndrome, associated with an abortion. According to them, women who demand complete control of their body should also shoulder the responsibility of preventing unwanted pregnancy.

Act responsible by avoiding unsafe sex. It is true that women should have the right to make their own choices, and they should not be a victim to the extra responsibility of conceiving. However, it is also true that women are blessed with the gift of giving birth to another life and hence, should accept it with responsibility.

I would like to conclude with the idiom, “to each his own”. Whether pro-choice or pro-life, everyone is entitled to their own opinion, and should not be forced to change it; neither should they force their opinion on others.