Meaning and Characteristics of a Centralized Government

A de facto government that rules under one authoritarian leadership or as one-party totalitarian and to which all federal states, local authorities, and smaller units are considered subject is called a Centralized Government. This political environment has numerous pros and cons. OpinionFront outlays the meaning and characteristics of a Centralized Government.

Home / Uncategorized / Meaning and Characteristics of a Centralized Government 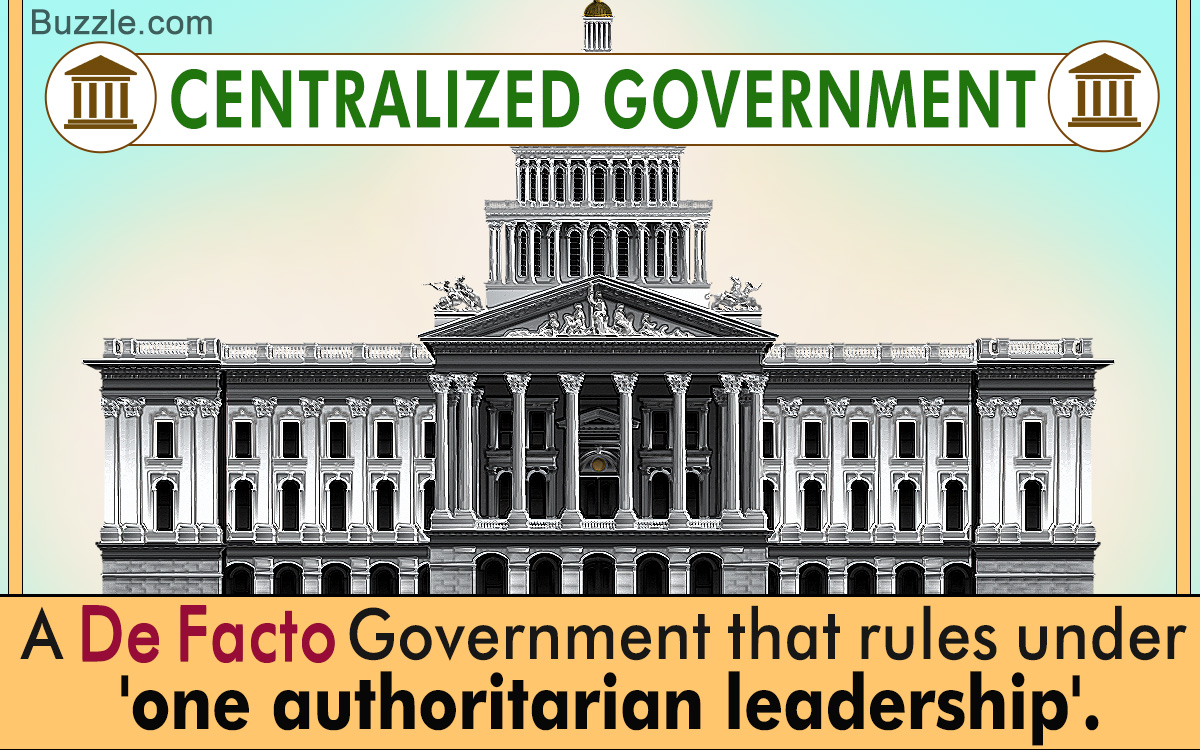 A de facto government that rules under one authoritarian leadership or as one-party totalitarian and to which all federal states, local authorities, and smaller units are considered subject is called a Centralized Government. This political environment has numerous pros and cons. OpinionFront outlays the meaning and characteristics of a Centralized Government.

One of the oldest and purest forms of the governing systems in the world, the centralized system or the unitary system holds all the power to influence the political and economical affairs of a country. The country runs under fixed laws and policies, even if local-level governments exist, they follow a single national policy executed by the national government. This governing system affects the entire nation including the defense, international relations, taxation laws, and trade. Absolute monarchs and tyrants follow this system, and it appears in both democratic and non-democratic countries.

Most of the European nations have unitary governments, except Belgium, Germany, Switzerland, Bosnia-Herzegovina, Austria, and Russia. It also exists in Africa and Asia. Liechtenstein, Qatar, and Saudi Arabia are the present-day monarchies with the monarch still holding significant power. The United Arab Emirates, though, is a federation ruled by an elective monarchy. Dictatorial and single-party governments are always centralized. The Federal Socialist Republic of Yugoslavia is an exception.

Ancient China has always been governed by despotic emperors and dynasties. It commanded a strong almost ruthless central rule. There were many dynasties competing to gain power, and when, one of the regional dynasties gained the upper hand, a ruler from that particular dynasty was chosen to govern the country. These rulers created a government enforcing ruthless laws, constructed massive armies for barbaric invasions and developed a strong labor force for dynastic development. These warlord kings followed the “mandate of heaven” believed to be given to them by pagan gods to rule their people. There were even rituals pertaining to human sacrifice, and were held during royal funerals to honor ancestral kings. Mostly servants, concubines, and soldiers paid the price of this despotic rule.

Eventually, China fell under the authoritarian rule of the first emperor, Qin Shi Huang, in 221 BCE. During his totalitarian reign, he ordered the historic records of the earlier dynasties to be burnt, and buried many scholars alive. Through his established massive labor force, he constructed ambitious monuments like the Great Wall of China.

His dynastic rule took control of lands owned by poor peasants and abolished the agricultural output, weights and measures got standardized, and width of the roads were increased, hence, trading flourished.

The dynasties that followed later, created a feudal system but continued to be absolute autocratic monarchies. The fall of the Chinese army resulted in the fall of dynasties; finally, the last of the dynasties was overthrown in 1911. Now, it is known as Democratic Republic of China, but the ancient autocratic techniques still persist in the modern Chinese states.

The Roman society was headed by the emperor who acted as the de facto authority in making final decisions, ratifying treaties, negotiating with foreign leaders, thus, declaring himself as the supreme religious head to initiate wars. The emperor not only headed the senators and equestrians who formed an informal body of advisors but also trusted slaves and freedmen. Sometimes, the opinions of the royal women in the empire also shaped the state governance decisions. During the earlier period of the Roman rule, access to the emperor was able on a daily basis but that practice got eliminated as the rulers became more ruthless and totalitarian.

The most important source of an emperor’s grandeur and authority was the military. The soldiers were loyal supporters of the emperor, and the death of a leader called for the appointment of the next one chosen from the same bloodline. Several emperors paid the ‘donativum’, a monetary reward to gain the loyal support of the army. The senate had very little say in the decision to choose a new emperor, thus, making the Romans, dynastic rulers for many years.

Characteristics of a Centralized Governance

Centralization and No Distribution of Power
All the power is vested with the central government, leaving only minimal power with the local government, and exercise strict control on all the aspects of governing. There is a single constitution that cannot be amended easily which adheres to the guidelines laid out by the centralized government.

Uniformity of Laws
A uniform set of laws is enforced by the central government for the entire state without any geographical distinction.

Flexible Constitution
The guidelines of the constitution can be changed in time considering all the circumstances, thus, making way for progress.

A Tug between Responsibility and Despotism
As all the power rests with a supreme authority, the government makes absolute decisions about military, economic, and the social-welfare status of the country. With the controlling power concentrating on exercising powers and abusing the system, a despotic rule may be the final outcome.

A centralized government benefits in remaining strong and powerful as it enjoys all the governing powers. Other benefits include cohesive government planning and promotion of national integration. The affairs of the country such as foreign, internal, judicial, and defense follow a simple set of structure which is easy to govern. People find the laws beneficial as they do not vary from state to state so there are less judicial disparities, administrative functions are uniform. As the number of governing ministers are less, the burden of expenses on the national treasury is less raking in more profits for the government. The constitution is flexible and changes with time allowing the country to progress.

The disadvantage of this type of government is that rural areas with their distinct cultural groups are neglected even if the needs of the nation as a whole are met. This kind of system is useful for countries having large urban areas.

Authoritarianism can produce some beneficial results but despotism spoils the goals of a supreme governance.