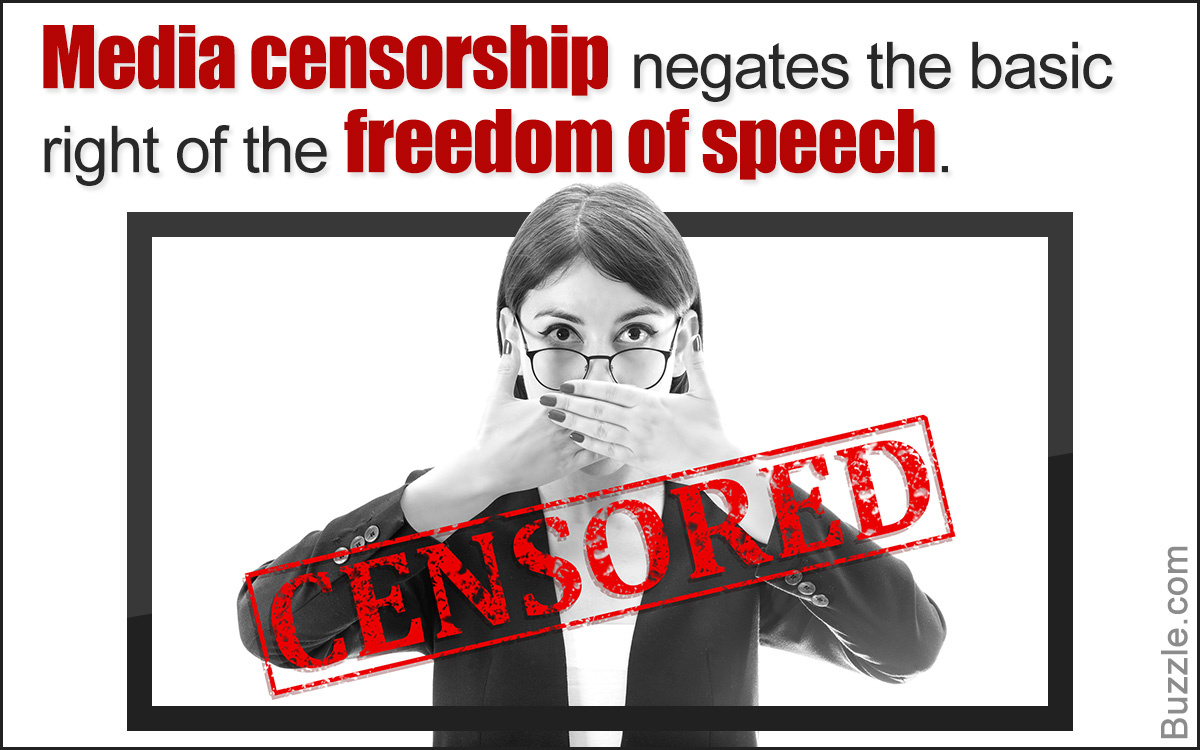 As the world is progressing towards a society without boundaries, the opponents of media censorship feel that censorship in general is a great hindrance to this progression. But then again, as these various communication media dabble with topics that need not be promoted or talked about at all, the question of censorship arises.

Censorship in the Media

While most countries have given the freedom of speech and expression of thought to its citizens, some countries try to counter the abuse of this right by some people, by restricting the freedom in reception of this speech and expression. Basically, while you’re allowed to say anything you want and do whatever your heart desires (although subject to legal framework), you may not be free enough to listen or appreciate others’ freedom of speech or action. Doing what you want is fine, as long as the others don’t see it.

While each country and each culture monitors the media in one way or the other, the cut-off level which defines what to show and what not to show, differs. There are also different types of censorship. One of the most common criteria is the age limits for viewing different media. Sometimes the censoring can act as a blanket on certain taboo topics, and the definition of a taboo topic would be defined according to the governing authority in the country. So, while the levels of media censorship exist, people are still calling for absolute removal of all types of censorship. Then again, other people are also looking to bring in more restrictions.

✱ Firstly, I feel it is important that we reduce the amount of violence that is on TV, at least for our children. We don’t want our children thinking that it is cool to be all heartless and go on picking off people on the streets. On the contrary, emphasis needs to be made on the fact that killing people is illegal and immoral. Hence the amount of violence the media broadcasts ought to be controlled at least for the kids.

✱ One more area where media censorship is heavily applied is in the advertisements of alcohol and cigarettes. Some countries believe that both smoking and consuming alcohol have a negative effect on the human body and ought not to be advertised anyway. Which I feel is a fair point. No tobacco or alcohol company in its right mind would ever air the ill effect of the products they are producing. As it is, these companies already enjoy substantial word-of-mouth advertising. Hence, the media censorship for these companies sounds justifiable to me.

✱ Sometimes dirty laundry ought not to be aired in public. A lot of people give violent speeches and derogatory and unfounded comments on a particular religion or race. Some people may try to spread nonsensical propaganda through an unsuspecting media. While it may take a bit to argue with their freedom of speech, perhaps it is best ignored.

✱ Another interesting argument in favor of media censorship is the security of secrets. Ignorance is bliss, they say and it is in the best interest of a country and its people that the plans of our armies are kept under wraps. Sometimes we need to trust them blindly. One interesting example of where media censorship could have been used, was when the terrorists attacked Mumbai in 2008. The news reporters explained the counter-terrorist operation in fine detail on TV and perhaps some terrorists in the hotel, in which they were hiding, could have just flicked on the TV and could have been warned of the upcoming actions of the counter-terrorists. Hence, some things are best not known.

✱ To conclude the media censorship I would like to say that the media is an extremely powerful force, which can reap great benefits if used positively and can be very damaging if not. It is like nuclear energy, which if used well, has great benefits for humanity, but there may be some, who might want to use it for the wrong reasons.

✱ I had previously made a point about how taboo topics like sex are best censored, but just because they are taboo topics, doesn’t mean that they ought not to be dealt with maturity. Sex education and awareness of STDs and AIDS need to be spread in many countries and you cannot brush these pressing topics under the carpet as taboo topics. The question is what to show and what not to show.

✱ Is ignorance really bliss? About some things, maybe. But the knowledge about the emerging technological trends and innovations needs to be spread among the people of the world. If knowledge doesn’t spread, then it leads to intellectual stagnation. The search for knowledge is what has brought humanity to where it is today, and suppression of knowledge would be a step backward rather than forward.

✱ How much freedom is good? Censorship they say negates the freedom of speech. What’s the point of your right to speak if there is no one to listen to what you are speaking? Then why speak at all? Doesn’t the very concept of censorship clash with the idea of democracy? Then if we are going to cover the ears of our listeners, then what is the difference between democracy and dictatorship?

✱ To conclude the cons I would like to say that censorship is all about degree. About how much to show and how much to hide. It definitely has its pros, but if the content in the media is manipulated by some people with vested interests, then the whole point of democracy and freedom of thought goes out of the window anyway.

You can probably see that this debate is largely a matter of beliefs. The questions that the censor boards need to ask themselves are what is the rationale behind the censorship? And are we censoring the media as per that rationale? Is the media being allowed to display what it ought to display? Are they showing things that people want to or need to know about?