A Guide to the Difference Between Metaethics and Normative Ethics 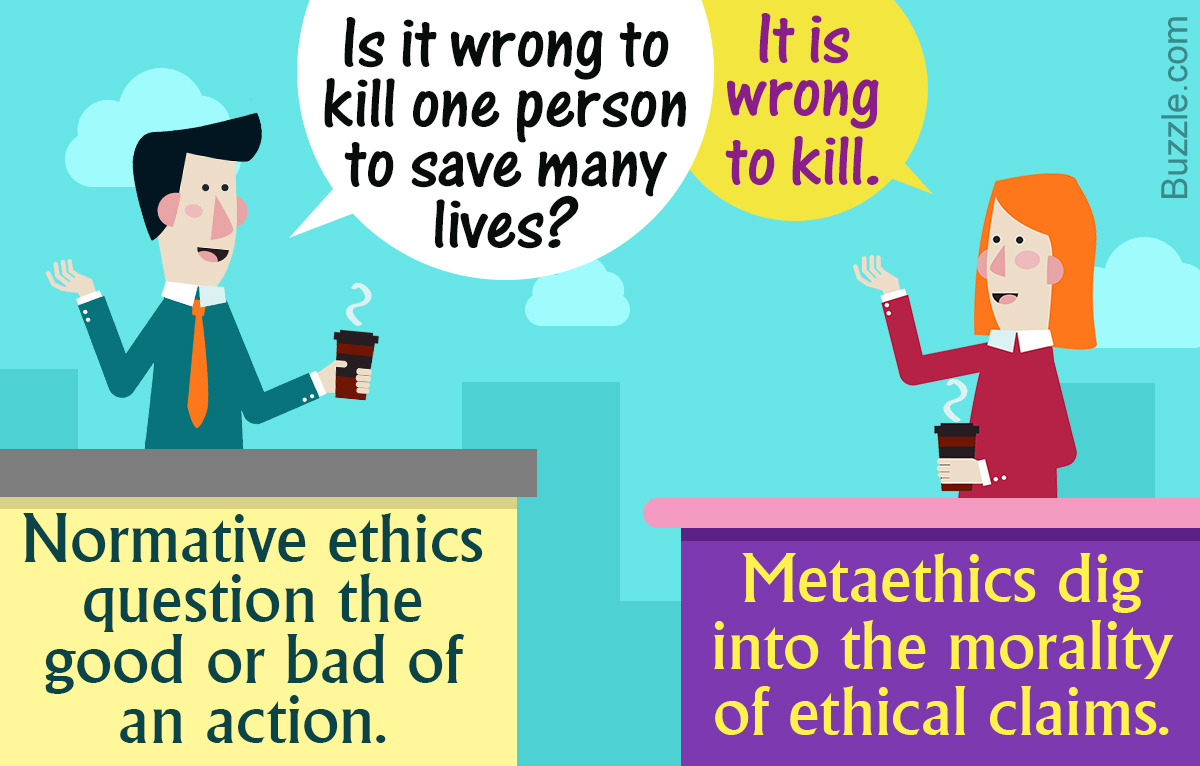 The Expert Opinion:
Although C. L. Stevenson’s Ethics and Language focuses primarily on metaethics, he proposes a balanced statement when he declares that metaethics can be used to resolve the situations of normative ethics.

The word ‘ethics’ signifies a moral ground, an existence based on morals and principles and values. It lays down the foundation for the basic code of conduct. There are two main branches of ethics, metaethics and normative ethics. When we talk about ‘being ethical’ or ‘he is an ethical person’, we talk about the rules he has laid down for himself, and how sincerely he follows them. This is the layman’s perspective.

It is a general viewpoint to follow certain regulations, to state some actions as good and some as bad, to live in a civilized society. But, ethics comprise further discussion about different reactions and beliefs in different situations, since a person changes as per circumstances. The comparison of metaethics vs. normative ethics is outlined below.

● Emotivism (Ethical non-cognitivism)
It depends on emotions and intuitions. When an ethical statement is made, devoid of facts, you can see what they really mean, what they are. In such a case, every individual may have been right in that situation.

● Ethical Naturalism
The theory states that one can analyze the judgment by holding ethical and non-ethical statements on the same pedestal. That means the ethical statements here are factual and are established based on hard evidence.

● Ethical Non-naturalism (Intuitionism)
It completely focuses on feelings and expressions. It is non-universal and based on strong personal instincts.

● Adolf Hitler sent the Jews to concentration camps. Hitler was an evil man.
This is an example of ethical naturalism, having made an analysis of the person based on certain facts.

● Euthanasia is wrong.
Metaethics will dig deeper into why this statement came into existence and why it is considered wrong. Or, if it is right, why so.

● Teleological theory
The good or bad judgment depends on the effects manifested by the action.

● Deontological theory
The good or bad judgment depend, to quite an extent, on other factors beside consequences, like intention, desire, etc.

● Normative ethics helps decide the good and bad, thus, we have two types of normative, moral judgments. One of them can be made based on actions, behavior, and commitment, while the other can be made depending on your emotions, thoughts, hopes, and desires.

● ‘Should capital punishment be made legal?’
This is an example of normative ethics. There may be varied opinions on this. In general, the mindset of people seems to be that capital punishment is also a crime, while some seem to equate it to justice.

● ‘Is it wrong to release a comatose patient from pain?’
This is a rather controversial debate. Normative ethics lay the foundation of whether an action may be morally correct or not, and are an attempt to live a decent, principled life. From that perspective, it may be a wrong action; after all, no one has the right to snuff the life out of another person, comatose or not. And yet, living like a vegetable may not be fair even for the patient. This is an issue where conflicting parties use both – the teleological and deontological theory.

Normative ethics appear to have a practical view, to a certain extent. They deal with ‘ought to or ought not to’, i.e., statements like should a person go ahead with an action or not, is it the right thing to do, etc. Metaethics, on the other hand, have more of a philosophical connection, having a strong relation to underlying reasons of ethical claims.

The relationship between metaethics and normative ethics is again, based on individual perceptions. Some experts state that the entire discipline of ethics is centered towards metaethics. On the contrary, there would be no definite explanation of being ethical without following norms. It would perhaps, make a little sense to state that metaethics encompass normative ethics, that is to say, by extension, the latter forms a fundamental base, while the former helps solve the latter’s problems (to an extent).