Face-Off: Reasonable Suspicion Vs. Probable Cause 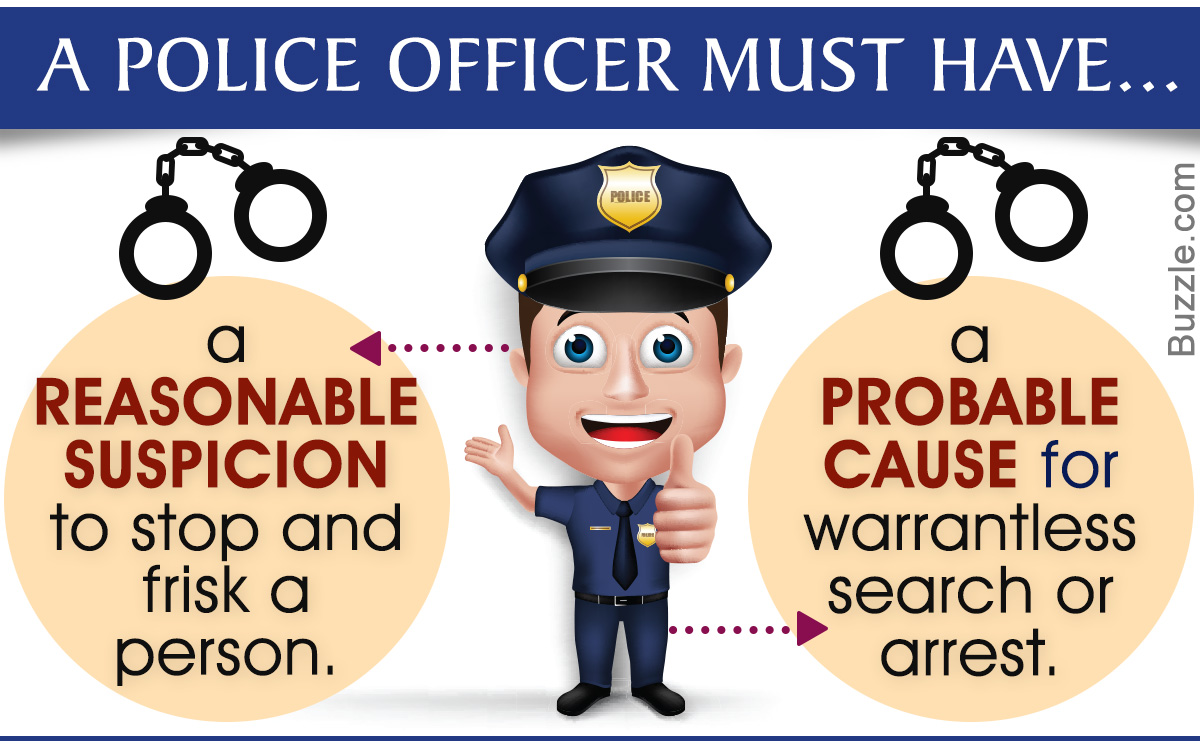 In O’Connor vs. Ortega, 480 U.S. 709 (1987), the Supreme Court held that, “Investigatory workplace searches require reasonable suspicion only. The delay in correcting the employee misconduct caused by the need for probable cause, rather than reasonable suspicion, will be translated into tangible and often irreparable damage to the agency’s work, and ultimately to the public interest”.

A police officer has the authority to stop and question a person, or to make a warrantless arrest and search. However, he/she must have a reason to exercise such authority; and that reason must be legally correct. For this purpose, he must follow some legal standards, on the basis of which he can exercise this authority. A warrantless arrest can be made by an officer if he has the ‘probable cause’ to do so. Likewise, an officer can stop and question a person, and may conduct a brief frisk if the former has a ‘reasonable suspicion’.

So, both reasonable suspicion and probable cause amount to legal standards for certain actions made by the police. These legal concepts help the police in deciding whether it is appropriate to stop and question a person, or to arrest him without a warrant in a given circumstance. These concepts are not defined in any statute, but have evolved through court decisions. They are intended to maintain a healthy balance between the personal liberty of citizens and the authority of the police. They act as a check against police arbitrariness, and uphold the constitutional rights as envisaged by the Fourth Amendment of the U. S. Constitution. These rights prohibit unreasonable searches and seizures.

The right of the people to be secure in their persons, houses, papers, and effects, against unreasonable searches and seizures, shall not be violated, and no Warrants shall issue, but upon probable cause, supported by Oath or affirmation, and particularly describing the place to be searched, and the persons or things to be seized.

Role of the Supreme Court

Though the term probable cause is used in the Fourth Amendment, it is not defined in the statute. While defining and interpreting this constitutional provision, the Supreme Court widened the scope of the concept by including searches, seizures, and arrests made without a warrant. So, a law enforcement officer must have a probable cause to make a warrantless arrest, search, or seizure; and also to obtain a warrant for arrest, search, or seizure.

When can a police officer stop a person or question the latter briefly? Legally speaking, the officer must have a ‘reasonable suspicion’ for exercising such authority.

In Terry vs. Ohio, 392 U.S. 1 (1968), the Supreme Court held that, “Where a reasonably prudent officer is warranted in the circumstances of a given case in believing that his safety or that of others is endangered, he may make a reasonable search for weapons of the person believed by him to be armed and dangerous, regardless of whether he has probable cause to arrest that individual for a crime or the absolute certainty that the individual is armed.” According to the Supreme Court verdict in this case, a person can be stopped and frisked by the police based on reasonable suspicion; and such a brief detention does not violate the Fourth Amendment.

In United States vs. Cortez, 449 U.S. 411, 417-418 (1981), the Supreme Court ruled that, “Based upon the totality of the circumstances, the detaining officers must have a particularized and objective basis for suspecting the particular person stopped of criminal activity.”

In short, a police officer can stop and frisk a person briefly if he has a reasonable presumption that the individual has committed, is committing, or is about to commit a crime. Such a presumption can be based on facts, circumstances, and the expertise of the officer. For example, a suspicious-looking man who drops a bag on seeing a police officer can be stopped and questioned briefly.

When can a police officer make a warrantless arrest or search? He must have a ‘probable cause’ for such an action. The probable cause is defined as follows: “Apparent facts discovered through logical inquiry that would lead a reasonably intelligent and prudent person to believe that an accused person has committed a crime, thereby warranting his or her prosecution.”

In Brinegar vs. United States, 338 U.S. 160 (1949), the Supreme Court held that, “Probable cause exists where the facts and circumstances within the officers’ knowledge, and of which they have reasonably trustworthy information, are sufficient in themselves to warrant a belief by a man of reasonable caution that a crime is being committed.”

So, probable cause is a standard, based on which a police officer can make a warrantless arrest or search. It is also required if he wants to obtain a search or arrest warrant from a judge. For example, a police officer receives information about some people carrying contraband in a particular vehicle. Within a few minutes, he intercepts the speeding vehicle and conducts a search. He finds contraband hidden beneath the rear seat. The officer can make a warrantless arrest in this case. Even the search was warrantless.

Difference Between Reasonable Suspicion and Probable Cause