Consumer Sovereignty: What are its Benefits and Limitations?

Consumer sovereignty refers to that market where production of goods and services is as per the wish and whims of the consumers. Consumers reign over the market, since only those goods are produced that appeal to them. Sellers have to compete to grab the attention of the consumers to sell their products.

Home / Uncategorized / Consumer Sovereignty: What are its Benefits and Limitations? 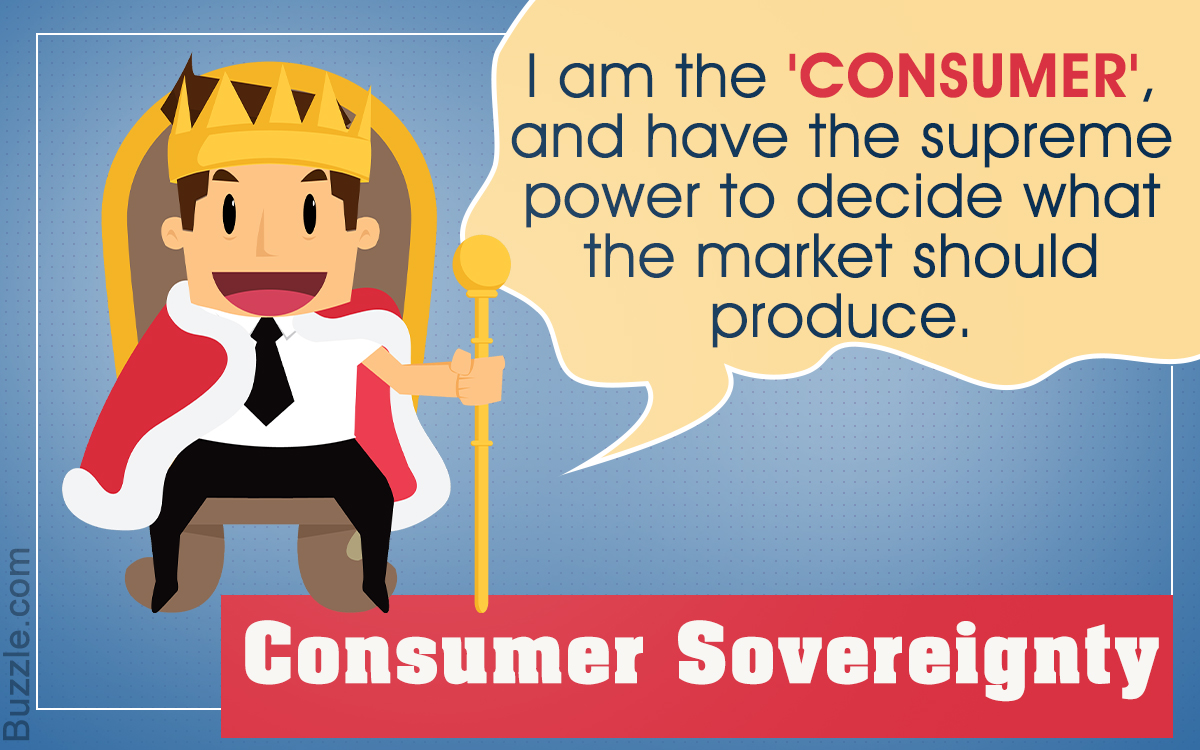 Consumer sovereignty refers to that market where production of goods and services is as per the wish and whims of the consumers. Consumers reign over the market, since only those goods are produced that appeal to them. Sellers have to compete to grab the attention of the consumers to sell their products.

“There is only one boss. The customer. And he can fire everybody in the company from the chairman on down, simply by spending his money somewhere else.”
―Sam Walton

Man is a social animal, but with individual likes and interests. Everyone has their own perspective. How would you feel if someone imposes their choices on you, or tells you this is best for you? No one wants that, unless you deliberately ask someone to make a choice for you. From food, liquor, to fashion, clothing and accessories, we all want something that is of our choice. In olden times, consumers has fewer choices, since they had fewer options. Today, if you flip through your remote control, you’ll notice that the number of television channels have multiplied by leaps and bounds, and you’re presented with a wide variety to choose from. To add to your ease, there is Internet shopping, which has made the world a smaller market. Trade facilities between different nations have improved, and it is easier to import or export goods today.

With the changes in technology and production, it is easier produce a variety of products, Thus, from caveat emptor (let the buyer beware) to caveat venditor (let the seller beware), there is a paradigm shift in the production system. Today, what the consumer wants is considered as the need of the hour. He gets to decide what should be produced in the market. Sellers vie to grab the attention of the consumers and get the desired output.

What is Consumer Sovereignty?

Consumer Sovereignty Definition: It is simply the power of the consumer to manipulate and influence the forces of the market. They determine what should be produced in the market. It means that the choices and preferences of the consumers determine whether the product should be produced in the market or not. Thus, a lot depends on the psychology of the consumers. Consumer sovereignty has been typically associated with being prevalent in a free market economy, due to more privatization and lesser or no government intervention. The famous economist Adam Smith was one of the strong advocates of consumer sovereignty.

A classic example of consumer sovereignty can be where a well-established entrepreneur decides to take up the production of a new product. ‘X’ is an entrepreneur who has a business of beverages. He has retail outlets which sell his products, and his brand is a local household name with goodwill established over the years. This year, he decides to start a new flavored beverage. However, before he considers investment in starting this new production, he needs to understand the market, and whether it is willing to accept a new product. Accordingly, he produced samples and distributed them at the outlets, and asked storekeepers to distribute free samples. Thus, in this case, ‘X’ has to take into account the consumer’s choices before taking up any production, or he may run into huge losses. After the sample distribution, the review was that consumers still preferred the old flavors over the new one, and hence, ‘X’ decided to discard the idea.

Consumers can be fooled into buying a particular product. Advertisement and marketing is a classic way to lure consumers into buying some products. For example, a young teen sees his icon endorsing a bike in an advertisement, and he wishes to emulate him, and will end up buying that bike.

In another case, the consumer may seek expert opinion or delegate the responsibility of making a choice to another person. Thus, there is no complete consumer sovereignty. For instance, before making investments, ‘Y’ may seek help of an investment banker to make all investing decisions on his behalf.

All consumers like to observe the fashion trends of any economy. It can be manipulated by sellers and others. Often, it is influenced by other factors. For example, a certain movie creates ripples in the market, and turns out to be a blockbuster. Thus, everyone wants to dress up like the protagonists. The clothing and fashion industry will exploit this opportunity and give the consumer something that will sell like hot cakes. Once word has spread, more and more consumers get enticed to buy that product.

In a mixed economy, there is some degree of government regulation, where the freedom of the consumer to choose can be curtailed. One such example is the electricity department which is not privatized in all nations. In such a government-owned sector, the consumer has little choice but to accept the given product or service. Thus, not everything is at the consumer’s discretion. In such cases, you cannot say that the consumer is the king of the market.

Element of Irrationality and Other Restrictions

Taxes vacuum out some portion of the money of consumers, thus creating a limitation on the buying capacity of individuals. Thus, automatically, the freedom to choice is curbed.

Though everyone has their own choices, production takes place as per the choice of the masses. Thus, for a select few who have an off-beat choice, there might be a very small market, or no market at all, serving as a limitation.

Whatever the case may be, today, for the consumer, there is a lot of freedom to choose, and the market is expanding day-by-day due to globalization. As consumers, we have good reason to rejoice.