Things You Need to Know About the Dot-com Bubble

The Internet is a booming sector, and the amount of development that has taken place in this domain has benefited many young entrepreneurs. However, between 1997 and 2000, this flourishing domain started to decline. 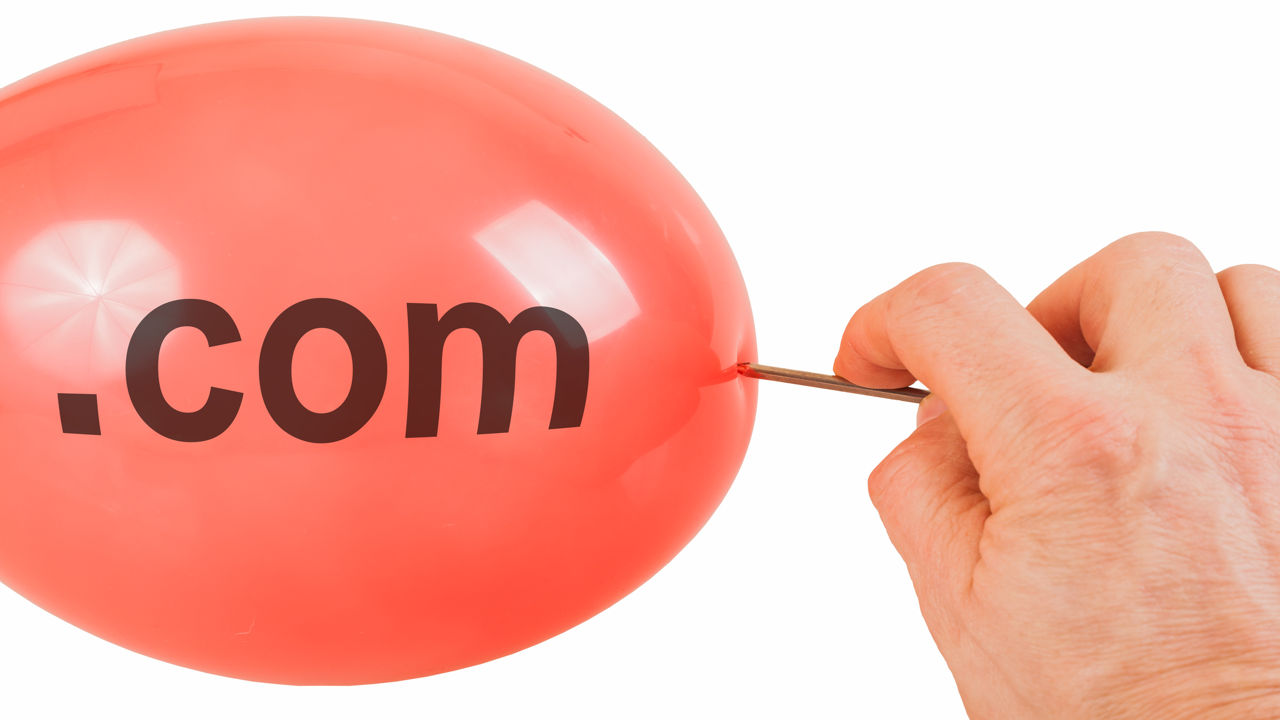 The Internet is a booming sector, and the amount of development that has taken place in this domain has benefited many young entrepreneurs. However, between 1997 and 2000, this flourishing domain started to decline.

In the stock market, bubbles refer to the value of a product that continues to rise beyond its true value. During the 1990s, the Internet was booming. A lot of Internet-based companies were founded, which were referred to as dot-coms. During this period, the market situation was such, that any company could increase their stock prices by simply adding the ‘e’ prefix to their name. A lot of money was invested in new startups without taking any precautionary measures, and this fad-based investing led to the dot-com bubble burst. Investors had put their money in startups in the hope of gaining profits, but the combination of speculative investments, abundance of venture capital, and inadequacy of the dot-com companies to make profits, led to the fall of NASDAQ, triggering a stock market collapse.

The American economy had come out of the economic depression of 1990-1991 by improving the poor allocations made during the 1980s. The economy seemed to be in good shape, thanks to the Plaza Accord. As per the Plaza Accord or Plaza Agreement, the governments of France, West Germany, Japan, United States, and United Kingdom agreed to depreciate the U.S. dollar in relation to the Yen and the Deutsche Mark. The U.S. manufacturing profitability increased due to the artificial lowering of the exchange rate of the U.S. dollar. This increase in the dollar eased the financial situation in the U.S., and thus, there was no increase in the CPI. However, the excess money that was available at that point of time was invested in the IT sector, and it seemed to pay off. The economy improved, and the stock markets began to rise.

The Reverse Plaza Accord was an agreement made by Japan, Germany, and America. As per the agreement, American purchases of Japanese and German goods would be subsidized. This increase in the value of the dollar against foreign currencies led to increased liquidity, which was also invested in the U.S. stock market.

The boom in the IT sector led to the stock markets soaring. Investments came pouring in, with a lot of companies who didn’t see any profits, or didn’t earn any revenue, making an IPO of their stock, and raising money. As per the dot-com theory, an Internet company’s survival depended on its customer base, and not on the profit that they earned. In order to increase their customer base, companies used television ads, print ads, and sporting events for promotional purposes.

By the beginning of 1994, the Internet had caught the public eye. A lot of IPOs were raised during this time, Netscape being one of them. The Netscape IPO occurred in 1995, with the shares priced at $71. By the end of the first trading day, the company earned a 108% gain. This was the beginning of fad-investments in startups. In 1999, there were about 457 IPOs that were released, and out of these, about 117 IPOs were related to the Internet and technology.

In 1995, the Federal Reverse lowered its interest rates by three-quarters of a percentage point, and it was during this period that the NASDAQ crossed the 1000-point level. The NASDAQ also saw a 25 percent rise in the next ten months to come. The Reverse Accord agreement ensured that the dollar was stronger than the Yen. So, investors used to purchase Yen at lesser rates and invest it in U.S. financial assets, which were denominated in dollars.

However, the 1997-1998 period wasn’t a good time for the economy. The Asian markets and Russia were facing economic crises, and so was the U.S. economy. Long-Term Capital Management was a firm that was founded in 1994. They invested in different markets and earned profits from them. However, the Russian crisis during this period led to the downfall of the firm, and this was a big blow to the American economy. Many problems, like increasing unemployment rate, led the Federal Reserve to take steps, like cutting down on interest rates, to strengthen the economy.

The boom actually began in 1999 with the NASDAQ rising 80 percent in 1999 alone. The credit to set up a dot-com firm was readily available, and this led to investors pouring in money in this sector. And thus began the dot-com boom.

It is always advisable to invest in ventures when there is enough consumption. However, during the boom period, consumption and investment exploded in the U.S. Until 2000, the personal savings rate had never gone below 10.9 percent, but between 1992 and 2000, it fell down to -0.12 per cent. People were leveraging everything they had, including their homes.

Companies in every part of America were trying to compete with the standard of Silicon Valley by building lavish offices and providing luxurious facilities to employees. Employees were paid with stock options instead of cash, and due to the soaring stock markets, they made a lot of money. But this extra money was again invested in the dot-com sector. This turned into a vicious circle when the bubble actually burst.

Companies undertook overambitious projects, and this led to their destruction. Telecom companies decided to implement fiber optic cables in the field, while network equipment manufacturers, like Nortel Networks, fell prey to over-extension. These companies took huge debts in order to invest in new technology.

In Europe, companies spent a lot of money to acquire 3G licenses, which eventually landed them in debt. Sonera, a Finnish mobile network company, paid a huge amount of money in the German broadband auction of 3G licenses. However, 3G was a far-fetched thought at that point of time, and this led to Sonera becoming a part of Telia, and TeliaSonera was formed.

By the end of the first half of 2000, the nonfinancial corporate debt reached 85 percent, the highest ever. Nonfinancial corporate borrowing increased to 9.9 percent from 3.4 percent in 1994. The NASDAQ soared to 5,048 points by March 2000, which was about an 83% rise in the index.

The dot-com firms turned out to be dot-bombs when the bubble burst. On March 10, 2000, the NASDAQ opened at 5,048 points, which was more than double compared to the previous year. However, when the dot-com bubble burst, NASDAQ fell, and reached 3,649 points on April 4, but rebounded back to 4,223 points.

By the end of 2000, NASDAQ had slipped to 2,471 points. The decline in the markets continued, and on October 10, 2002, NASDAQ hit an intraday low of 1,108.49 points. This decline in the stock market led to many dot-com firms closing down businesses as they were never able to make profit. These companies were referred to as dot-bombs.

However, due to increasing energy prices, NASDAQ closed below 2,300 points, which was 20 percent below recent high marks. The markets crashed further, and NASDAQ fell below the 2000-point mark in September 2008. In March 2009, a six-year intraday low of 1,265.52 points was observed.

The most significant event after the burst was the merger of American Online and Time Warner. However, due to disagreements, the two companies stepped out of the deal. This merger was termed as the worst in history.

As the financial situation degraded further, many companies filed for bankruptcy. WorldCom’s bankruptcy was the third-largest in the history of corporate bankruptcy in the U.S. Many companies who ran out of capital had their domain names taken over by competitors or domain name investors.

Many companies changed their names so as to remove any association with the ‘dotcom company’ tag. Most companies went bankrupt, while a lot of mergers and acquisitions started to take place. Most investment firms, like Citicorp, Merrill Lynch etc., were fined for fraud and misleading investors during the time of the bubble. Employees were laid off. Internet providing companies like Cisco, who invested huge amounts in fiber optic cables, suffered huge losses.

As most of the Asian markets were dependent on the U.S. economy, the bubble burst effect was seen in those markets as well. Countries, like Thailand and Malaysia, almost filed for bankruptcy. In Europe, countries like Spain had invested a huge amount of money in 3G licenses. After the meltdown, they suffered huge losses; amongst all the countries, Spain was the worst hit.

However, an in-depth analysis of the situation in 2004 showed that 90% of the dot-com companies did survive the burst. It was the smaller companies who ended up on the losing side, alongside investors who didn’t make smart business decisions.

Big players like Google, Amazon, and eBay survived the bubble burst, while smaller companies couldn’t take the heat. The big blow to the already-sinking economy came with the 9/11 attacks. The NYSE was suspended for four trading sessions, and this led to a further drop in the economy. The world economy did take a few years to recover the lost money. But we have finally recovered from the $5 trillion loss in market value from 2000 to 2002.