What Does Establish Justice Mean? This Write-up Will it Sum Up

Home / Uncategorized / What Does Establish Justice Mean? This Write-up Will it Sum Up 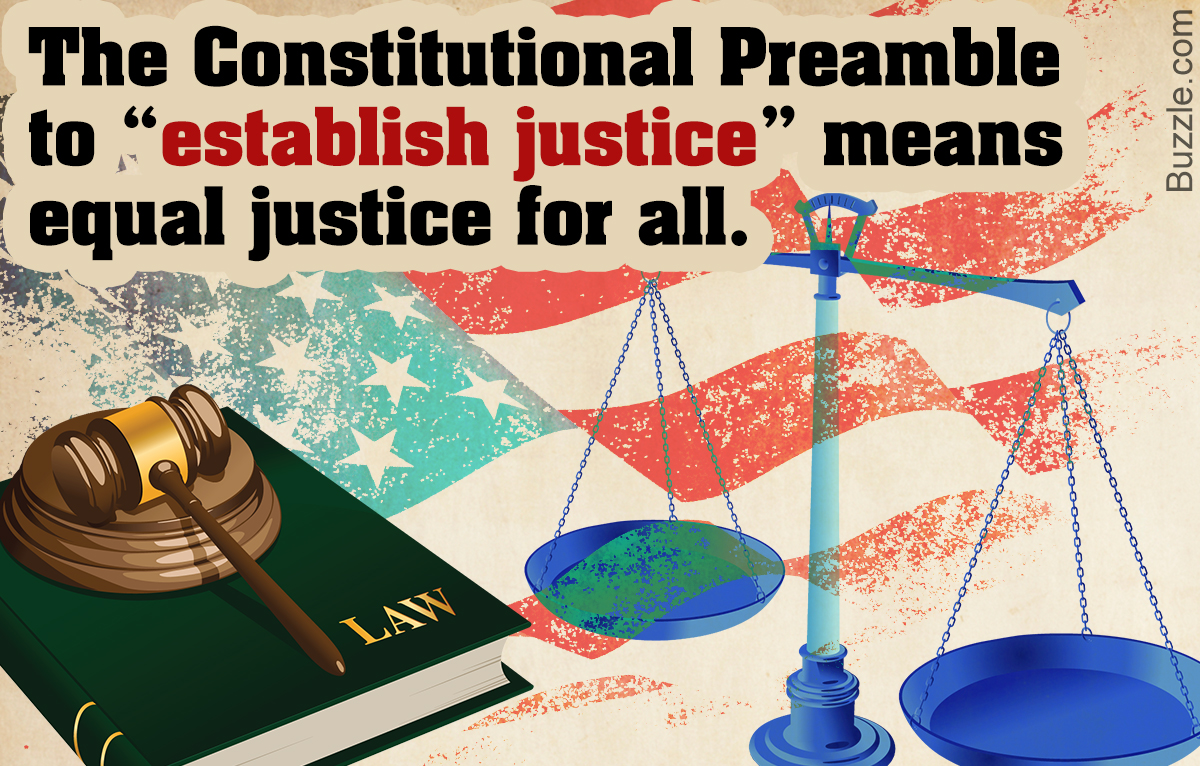 The Preamble was added as an afterthought to the Constitution at the Constitutional Convention of 1787, it was composed by Pennsylvanian Gouverneur Morris, who was also one of the founding fathers.

The Constitutional Preamble is the perfectly crafted masterpiece of Gouverneur Morris, and it was the crux of the whole constitution. The popular phrase ‘We the People’ was so revolutionary that it was never used earlier in any of the official documents, it symbolized the governance of the people and not by a despotic leader.

It states that a judicial system would be implemented to provide equal rights of justice for all, to provide safety to all within the borders, organize defense in the scene of war, and to promote a better lifestyle for all the citizens.

We the people of the United States, in Order to form a more perfect Union, establish Justice, insure domestic Tranquility, provide for the common defense, promote the general Welfare, and secure the Blessings of Liberty to ourselves and our Posterity, do ordain and establish this Constitution for the United States of America.

The Framers of the Constitution clearly meant to implement the formation of an independent Supreme Court and the planning for a federal judiciary superior to those of the states; and straight-out prohibition of flagrant state practices.

It states that every individual will have equal rights to justice, will be treated with fairness, and provided safety through judiciary. That no mortal or entity has superior position under civil and criminal statutes, and no political agency can establish such a preference.

The American colonists were proud to be known as English, and aided the British reign against the French in the Seven Years War in 1763, with troops, monetary benefits, and provisions. They thought this would give a brighter future to the New World Colonies after England’s victory in the war, which was not the case.

Britain contrived to oppress the colonies by the way of taxation. The three major taxes that crushed the colonists were the Colonial Currency Act, the Sugar Act, and the Stamp Act. Conditions became harsh as it prevented the colonists from having their own paper money, which impaired the economy. The Stamp Act restricted the documentation process as every legal and business document demanded a stamp on them. The Sugar Act levied petty taxes on sugar, wines, and many other foreign products.

All these atrocities enslaved the American colonies, thus eventually leading to the American Revolution or the American War of Independence. After gaining new control and in a bid to abolish the unequal practices and laws of the British reign, the Constitution was drafted and the Constitutional Preamble echoes all the goals of the independent nation. The Founders were mindful of the injustices being heaped upon the citizens by the British regime, and they coveted to institute a republican form of government to curb all the previously known atrocities.

There would be only one judicial power established in the country, and that would be the Supreme Court. The judges appointed to these and the inferior courts would hold office according to their good behavior.

The judicial power will cover all cases, in law and equity, arising under the Constitution, the laws of the United States, and treaties enacted, or which shall be enacted. Ambassadors, public ministers and consuls, and admiralty and maritime. It shall cover controversies between two or more states, between a state and citizens of another state, between citizens of different states, between citizens of the same state exacting estates under grants of different states, and between a state, or the citizens thereof, and foreign states, citizens, or subjects.

Except for the cases of impeachment, all the criminal trials will be conducted by the jury, all such trials will take place in the state where the crime is committed. If not committed in any state, then Congress will decide the place of the trial.

Treason against the United States will be held as crime only if an individual levy’s a war against the nation or aids the nation’s enemies in person. No individual shall be convicted of treason unless two witnesses testify about the act, or a direct confession is made in the open court by the accused.

This precept assumes the right for every citizen of the United States to be protected as to life, liberty, and property, and to be presumed guiltless until proven guilty in a court of law. For the accused, the judicial system gives the opportunity to hear and interpret the accusation, cross-examine those who are making the accusation, organizing honest and speedy trial, and have an chance to repair the damage if found guilty.

The Department of Justice (DOJ) imposes the law and maintains the concerns of the United States according to the law, ascertains public safety against foreign and domestic terrors, renders federal leadership for prevention and control of crimes, attempts fair punishment for those guilty of unlawful behavior, and provides fair and impartial administration of justice for all Americans.

The Bureau of Prisons (BOP) defends public safety by assuring that Federal offenders serve their sentences in prison facilities that are humane, cost-effective, and befittingly secure. It also aids to minimize potential future crimes by boosting inmates to participate in beneficial rehabilitation programs.

The Central Intelligence Agency (CIA) is responsible for national security. The key function of the CIA is to pull together selective information and analyze threats from foreign governments, corporations, and individuals, and also to counsel public policymakers.

The Federal Bureau of Investigation (FBI) is an intelligence and law agency within the nation. This system is contrived to defend the citizens of the United States from the most grievous menaces such as terrorist organizations.

True justice must be fair and dealt out equally and exactly to all. “When one undertakes to administer justice, it must be with an even hand and by rule; what is done for one must be done for everyone in equal degree” ― Thomas Jefferson (The Making of America, p. 241)