Despite the substantial physical distance between the various cities and countries, the world is effectively getting smaller due to the advent of advanced technology and scientific know-how. This supposed shortening of worldwide distances has resulted from the reduction of time involved in transportation and communication. This piece further explores this concept in order to explain the time-space compression with the help of examples. 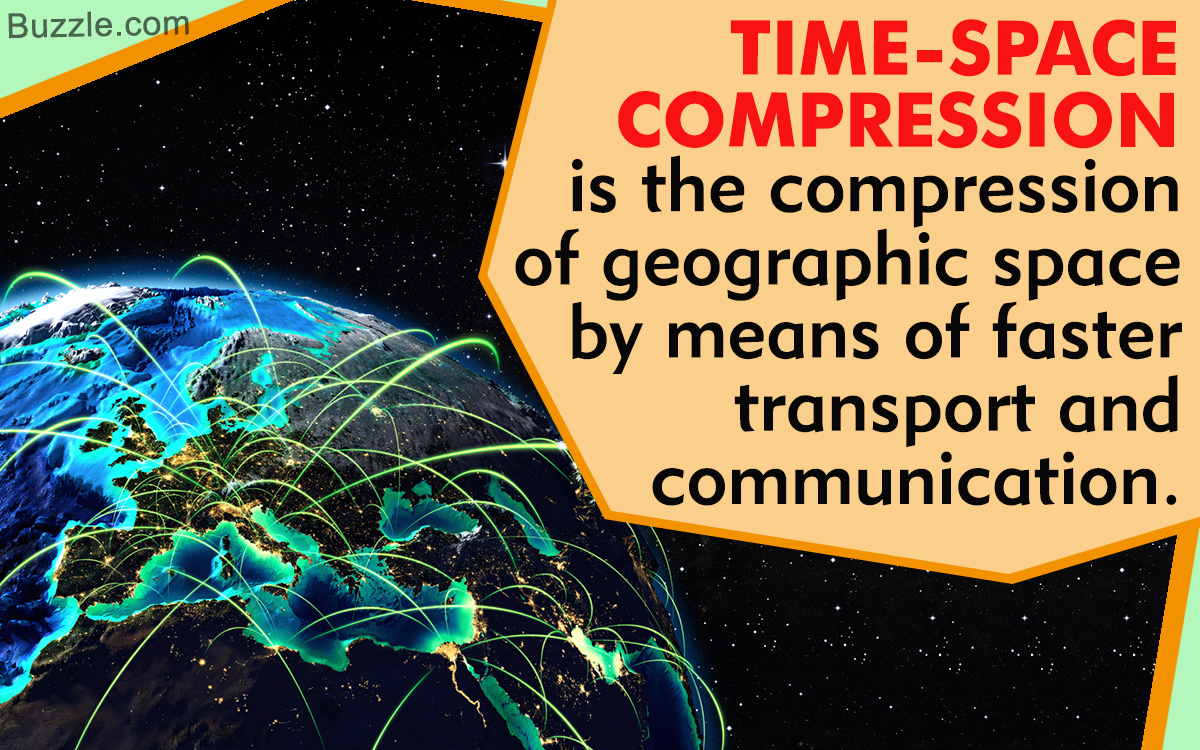 Despite the substantial physical distance between the various cities and countries, the world is effectively getting smaller due to the advent of advanced technology and scientific know-how. This supposed shortening of worldwide distances has resulted from the reduction of time involved in transportation and communication. This piece further explores this concept in order to explain the time-space compression with the help of examples.

The concept of time-space compression was first articulated in 1989, by geographer David Harvey in his book, “The Condition of Postmodernity”.

The notion and perception of space is time-dependent, and all distances are understood in terms of the time taken to traverse it. Hence, if the time taken to conduct a specific space-related function is reduced, the corresponding space is perceived to have reduced as well. This concept is called the time-space compression or time-space distanciation. It describes an accelerated frame of how people experience time and space. This concept owes its existence to the development of advanced technologies concerned with transport and communication.

With the help of these technologies, the distance between people has greatly been reduced, as their use allows people to visit places or communicate with people in other places with great ease and within a short amount of time. Thus, resulting in a “compression” that has done away with traditional spatial barriers. David Harvey, the geographer who first introduced this term, refers to it as “processes that so revolutionize the objective qualities of space and time”, and also state that “as spatial barriers diminish so we become much more sensitized to what the world’s spaces contain”. This can be understood by making comparisons between the modern era and the post-modern era.

In the past, traveling from one country to another required a laborious and tedious documentation process, which was immediately followed by an equally wearisome and long journey to the destination. In contrast, nowadays the documentation is all computerized and hence does not take more than a few days, and the journey itself has been reduced exponentially. Traveling times that used to be described in terms of weeks or even months are now described in terms of minutes and hours, thereby bringing the world seemingly closer. Despite the fact that the actual distance remains the same, the advent of technology has given rise to traveling alternatives that create the illusion of a smaller distance. Such a drastic compression in various aspects of people’s lives has led to the formulation of globalization.

Anthony Giddens, a British sociologist, describes globalization as “the intensification of worldwide social relations, which link distant localities in such a way that local happenings are shaped by events occurring many miles away and vice versa”. The time-space compression refers to technologies that have, in recent times, accelerated spatial and temporal distance. They include technologies employed in communication, travel, and economics. It is best described by the theorist Paul Virilio as follows: “Today we are entering a space which is speed-space… This new other time is that of electronic transmission, of high-tech machines, and therefore, man is present in this sort of time, not via his physical presence, but via programming”.

❍ Methods and technologies used to communicate with other people have significantly evolved over the past few decades. This evolution has ranged from telegraphs in the past to modern-day instant messaging. In the past, if a message had to be urgently sent, one needed to go to the local telegraph office where they dictated their message in a short and succinct form, which was then relayed along transmission cables via a standard set of signals. This would then be received after a day or two at another office, where it would be translated and then sent by hand to the recipient.

❍ Later technological advancements introduced telephones and fax machines, which allowed one to communicate much faster and almost instantaneously with other people. However, the current technologies that have produced the internet and smartphones leave these previous versions in the shade. Now, at the click of a button or the touch of a key, one can communicate with people from any and all parts of the world. Many theorists call the present time period as an “instant” age, where communication with anyone and about anything is conducted instantaneously. The ability to call or message someone at the other end of the world in a split second, has made the idea of spatial separation obsolete, allowing people to feel closer.

❍ Earlier modes of transport included slow coach cars, trains, and ships, which took a long time to transport people from one place to another. With modern propulsion systems and engines, these modes have become much faster. Another mode of travel, airplanes, were too costly to be used by the general public. But, nowadays due to the aforementioned advances, the cost of air travel has been greatly reduced, thereby opening up another alternate means of travel.

❍ Improvements of the transportation devices has not only reduced the time and the amount of money required to go from one place to the other but also improved the quality of travel. Now people can undertake trips with extreme ease and comfort and at a reduced price. The journeys that used to take days to complete in the past, are now only a matter of hours. One can go so far as to reinvent the catchphrase “around the world in 80 days” as “around the world in 80 hours”. This reduced journey time has diminished the notion of vast distances and reduced them to a matter or minutes and hours, causing a perceived notion of spatial compression.

❍ While the latest technologies have made life considerably easier, in order to actually experience and enjoy these amenities, one needs to have enough capital to afford them. This is taken care of by the economic situation of a person and of the country he/she dwells in. The development of countries is not uniform, with the world separated into categories based on the level of development and progress exhibited by the country. This leaves the developing nations with a slight disadvantage as they are not as economically stable and powerful as the developed nations. This leads to the creation of a need to overcome spatial barriers in order to stabilize and advance a nation’s economy in the world so as to have an equal footing with the other nations.

❍ This is done by creating and opening up new markets that provide services in a more cost-efficient manner as compared to the other nations, thereby creating ample job opportunities, which in turn lead to a cash influx. The production cycles of companies and product-factories are sped up with the use of latest technologies so as to bolster and boost the economy and reduce the turnover time of capital. The more stable a nation’s economy is, the easier it is for the people of the nation to overcome spatial barriers. If an average economy is salvaged and revolutionized into becoming a stable and powerful economy, it raises the basic standard of living of that nation, allowing its people to afford technologies and luxuries that would make life even easier. It would afford them the ability to travel at will to wherever they desired for education or other purposes, and also to afford better communication devices and technologies, leading to an exchange of ideas with people across the globe, in turn helping in the general development of the people.

Due to the rapid evolution of media and means of mass communication, all the people in the world are connected to each other via various channels of social media, Internet, televisions, newspapers, etc. This has led to every individual event and person to be linked with one another, forming a collective community called a “global village.”