A Comparison: Consequentialism Vs. Deontology Vs. Virtue Ethics

Home / Uncategorized / A Comparison: Consequentialism Vs. Deontology Vs. Virtue Ethics 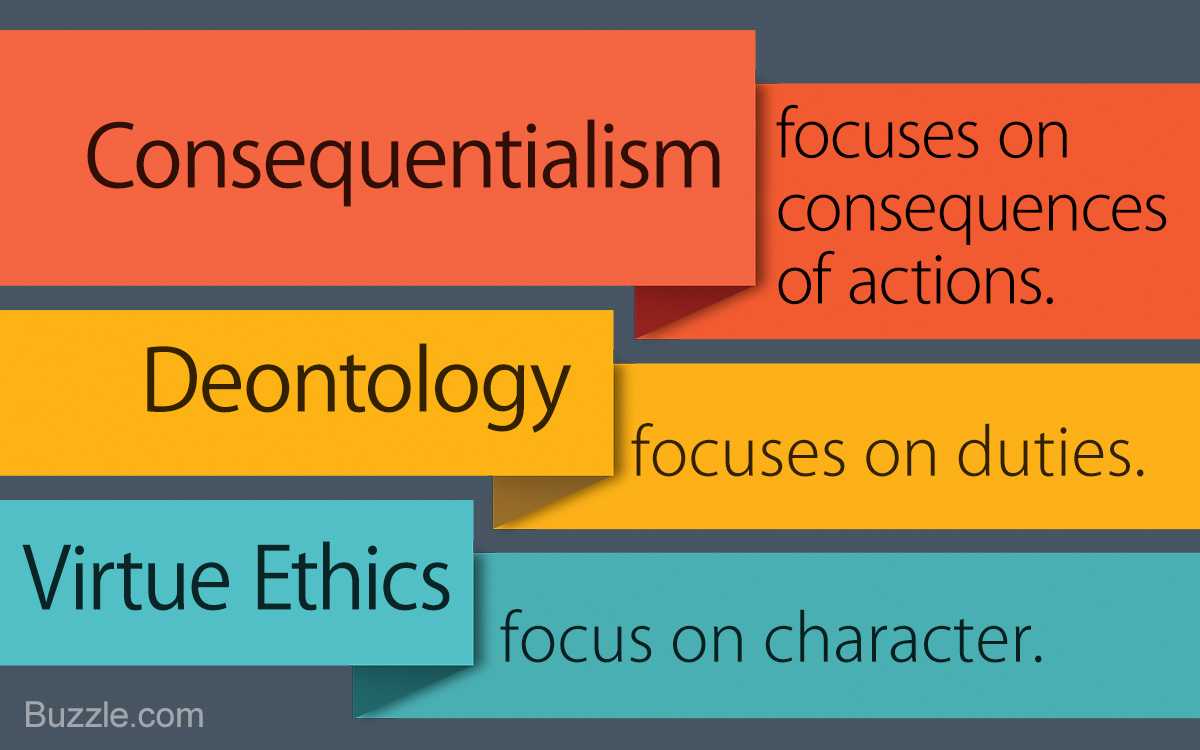 Morality is a rather controversial topic and invites several philosophical debates. A person’s morality may be judged on a number of factors. Since childhood, we are conditioned to believe certain things, conditioned to judge what actions can be called right and wrong.

Consequentialism and deontology are two such theories that are classified under ethics of conduct, i.e., our behavior and the way we conduct ourselves. Virtue ethics, on the other hand, is considered more of a normative ethical theory. The paragraphs below explain the differences between these three theories with examples.

The term was originally coined in the essay titled “Moral Modern Philosophy”, by G.E.M. Anscombe, the renowned British analytical philosopher. The theory takes root from utilitarianism, and stresses on the fact that the morality of an action depends on its consequences.

Deontology takes root from the Greek words deon (duty) and logos (study). Immanuel Kant, a famous deontologist, is considered to have formulated modern deontological ethics, which stresses on the fact that the morality of a person is dependent on how well he fulfills his duties and obligations.

Virtue ethics seems to have taken root in ancient Greek philosophy as well. It stresses on the fact that morality of a person or action depend on how ideal the character traits are.

As the word suggests, it concentrates on the consequences, irrespective of the intention. It focuses on identifying the moral conduct through which the right actions can be carried out and happiness can be maximized.

According to the definition of deontology in ethics, it focuses more on obligation, duty, or ideal expectations. Like its previously-mentioned counterpart, it focuses on conduct, but there is a minor difference between deontology and consequentialism in this case. It focuses on identifying the moral conduct through which the right actions can be performed but based on what is laid down as a duty. To follow the set rules and regulations can be one of the weaknesses and strengths of deontology.

It is different from both the above concepts as it concentrates completely on virtues and ideals. It does not consider following the set laws when performing an action, nor does it consider the action results. What it considers is the ideals and values you have followed that have resulted in the best possible action. There have been many criticisms of virtue ethics due to the absence of a rational experience.

The central question in both these cases is, ‘What you ought to do?’ That is to say, the question focuses what you should do, rather than what you want to do, or whether you should do what you feel like. The essence is to do the task, according to how right it is presumed to be.

The central question is, ‘What kind of a person should I be?’ Thus, virtue ethics do not concentrate on the correctness of the act, but the moral conduct of the agent who is performing the act.

What is Good and What is Right?

Consequentialists state that maximum happiness achieved is what is good; the actions that maximize this good are right. The focus is on getting what is good, and getting what you want. It does not hold true if the two requirements are in conflict.

Deontologists state that the right action performed or the state of affairs that led to the right action are good, while the fact that the action was done in accordance with the set rules is right. The practical focus is to determine what is rational―as per the rules and as per the correct action.

Those who revere virtue ethics state that whatever results in the betterment of humanity is good; the fact that the virtuous person followed his ideals to achieve the same is right.

The consequentialist philosophy might require that the interest of someone is sacrificed for something better. One of the most stated examples of this concept is in nursing. Assume that a nurse is tending to a cancer patient, and is faced with the dilemma of whether or not to tell him the truth that he has only a few months to live. What should she do in this case? If she tells him, he might be brave enough to face it and spend his last days with his family, which is a good consequence. Then again, if she does not tell him, it may be mentally traumatic for him to know whether he is going to live or die. Who is to decide what consequence is right in this case? These opinions can differ from person to person. From a neutral perspective, however, it would be better to tell him the truth, despite the fact that it might be considered cruel for many, because he would at least get a chance to say goodbye, to do the things he hadn’t done so far.

It concentrates on the correctness and wrongness of actions based on how well the rules of duty and responsibility were followed. For instance, consider that a man has saved enough money to buy a house for his family, but has to deal with an unfortunate situation when his son meets with an accident. It is his duty to provide a better shelter for his family, and it is also his duty to save his son’s life. In such a case, the best and right action would be to save his son, for if his son is safe and sound, he will be mentally happy and relieved to earn more money and plan a better future for his family.

As mentioned earlier, this theory solely focuses on ideals. For instance, consider an individual who is the bank manager, and his own son has been caught in the act of robbing the bank. Virtue ethics state that the man must be ideal and righteous and moral, and have the criminal punished despite the fact that he is his son. In this scenario, he failed in his duty as a father, and the consequences of his act would affect his entire family. Yet, the ones in favor of virtue ethics would state his act to be correct and honorable.

While the above concepts exhibit certain criteria for morality, the truth is, moral conduct widely depends on circumstances, which is probably why the cliché ‘it was all in the moment’ is actually true. While going through a trying situation, an individual tends to do what is right at that time, for it does not make sense to think about the likes of deontology or consequentialism.