Understanding ‘Legal Positivism’ is Now Easy With These Examples

This Buzzle post takes a closer look at the theory of legal positivism. It discusses the classical beliefs proposed by legal theorists such as John Austin and H. L. A. Hart, as well as draws a contrast between legal positivism and the natural law. 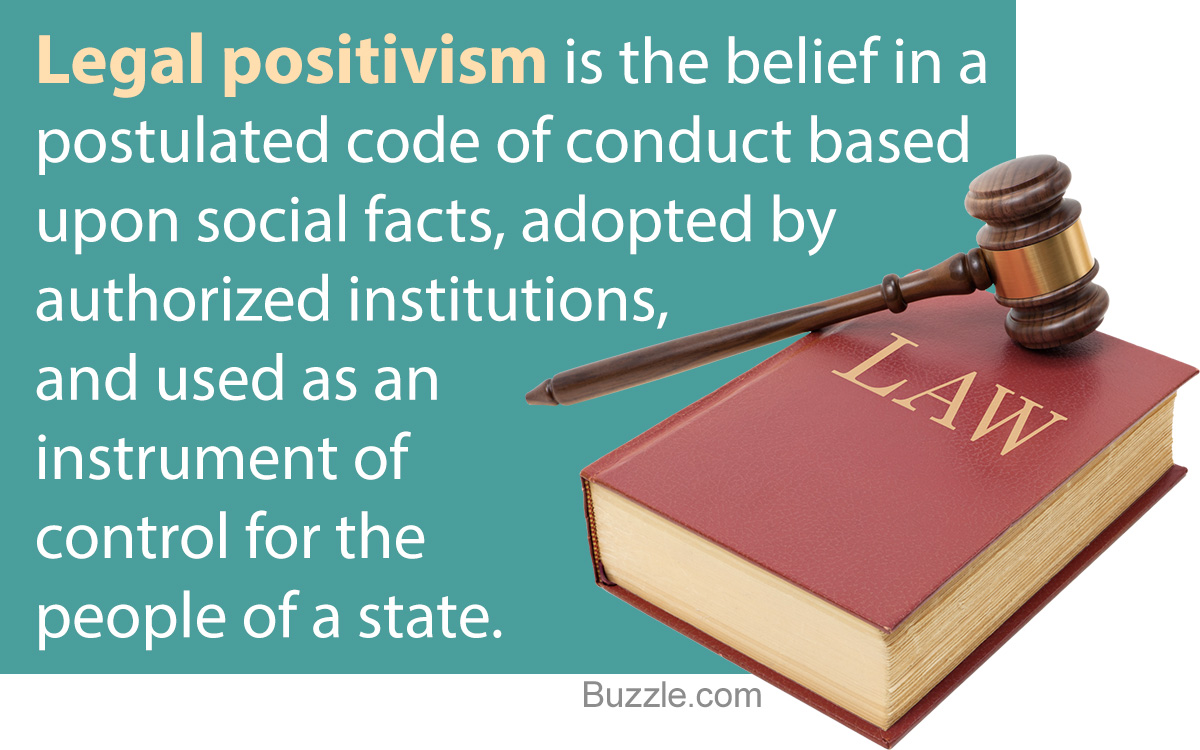 This Buzzle post takes a closer look at the theory of legal positivism. It discusses the classical beliefs proposed by legal theorists such as John Austin and H. L. A. Hart, as well as draws a contrast between legal positivism and the natural law.

“It is man’s unique privilege, among all other organisms. By pursuing falsehood you will arrive at the truth!”
― Fyodor Dostoyevsky, ‘Crime and Punishment’

A doctrine whose believers practice a deductive approach for laying a detail oriented set of rules that are accepted, enacted and practiced by authorized governmental bodies and political institutions qualified for rendering services such as law and order to the society at large for which it is designed is called legal positivism.

A society deals with a lot of internal disputes and has to eventually establish a framework or legal reference for drawing the line between what is acceptable and what is not. Legal positivism is the outcome of measures taken to enforce a generalized social control over the people of the state for the smooth functioning of society and its components.

It may be seen as an ideal state defined by a specified set of values or guidelines to maintain stability in the system. This state might not be completely achievable but the possibility of achievement is to be kept maximum at all times by its practitioners. Here, no target block is treated as superior. It has a clear demarcation between what is permitted and acceptable to suit social order and what is not. These have been ‘enlisted’ over the course of time by a society or state and its governing organizations. The basis of this classification is purely based upon calculative justification and not based on moral values.

This type of a belief system happens to be beneficial in a lot of ways. Due to the identification of written set of laws, those who seek justice are never denuded of what’s rightfully theirs. Another aspect of legal positivism is the prevention of judiciary panel or the convening judge to impose their predispositioned regards in or associated to a case under the study of court.

The legal positivism in its most efficient form is bound to serve maximum benefit to each member of society. This canon-theory and its postulates can be seen as the third-party intervention in the settlement of any dispute from neutral grounds and concluding the best possible solution available to suit social structure.

‘The Province of Jurisprudence Determined’ was one of John Austin’s works that described the three aspects of classical legal positivism.

They are combined to be seen that ‘all laws as coercive orders from a sovereign that obliges the people with duties that do not apply to the sovereign himself, failing which the people are threatened by a formal sanction’. These sanctions could be ‘punitive’, i.e., punishable by money and life, or ‘privative’, i.e., depriving the offender of his rights. He proposed that the orders from the sovereign was unquestionable and to be followed by one and all. This habit was a tenet among the people subjected to such law and order, as the sovereign polices and reaches out to the people with armed forces who do not abide by his decree.

H. L. A. Hart put forward a theory that saw the positivist school of jurisprudence in good light. He saw it as an evolution of the ‘primary’ laws into the ‘secondary’ law structure. The primary structure confers duties to the citizens of a state, forcing them to perform certain functions or refrain from committing specified acts. While, the secondary rules kind of spiral from the primary ones. These enable the citizens to gain rights and constitutional powers by their course of action or speech.

His theory as explained in his work ‘The Concept of Law‘ provides the three ways in which the ‘secondary’ laws enables the ‘primary’ law structure.

Same as any holy scripture is not faxed straightway from heaven, the legislation laid out by any governing body is not free from loopholes. Legal positivity is highly acclaimed by those who treat law above all. What they tend to overlook is that same legislature may be used in a twisted manner by many to get away with their crime. An extremist approach to the laws laid out and practiced by authorized organizational structures gives rise to a herd behavior. Self sense of judgment gets hampered in the course of ultimate choice between the right and the wrong. It leaves almost no sense of freedom for the judges to make case-specific decisions based on their discretion. History has evidential instances that suffice to prove that what’s constitutional and legal for one governing system might be a matter of contempt for other institutions. This questions the morality of judgments being made. What the positivists call as ‘morally neutral’ is what the critics refer to as ‘lack of intrinsic morality’.

Legal Positivity in the Past

The example of slave codes designed against the rights of African-American slaves during the Civil War is a classic example of how legal positivism is blundered. The ‘masters’ were given the supreme authority over the decisions regarding the life of the ‘slaves’ and all decisions regarding them. The slaves were stripped of their basic human rights and were not permitted to make their own choices in any regard. These codes were established by the erstwhile governments of various states and accepted by all, but hardly any morality or human consideration can be traced in these codes.

Similar were the code of conducts against the freedom of women in various cultures since times before Christ until the late 18th century. It was ‘legal’ for a husband, by the decree of governing authorities, to ‘punish’ his wife through ‘physical torture’, if required, in case she denies obedience or fails to perform her responsibilities well. The orders from the ‘man of the house’ were to be followed by the women, religiously, and without raising any doubt against it.

Nazi Germany also had a ‘system’ against the Jews, which is now looked upon as one of the most tragic scenarios in international history. A set of anti-Semitic laws were set up to deprive the Jews of their rights and holdings, so as to force them to leave Germany. History has enough evidential texts and records to reveal the callous intent of these laws towards the entire Jewish race.

The natural order of things is the ultimate truth. The natural law is something that humans are doomed to follow by their inner instinct. It is a moral force that drives their course of action. Humans are burdened by their conscience to act in the rightful manner and abide by the social code of conduct that they believe in. Natural law, at various instances, converges with legal positivism. These are the times when the morally right thing to be done matches the legal code as designed by the governing body of a state. But that is not the case every time. An act performed by an individual may be an answer to his conscience and sense of judgment, and maybe even seen as rightful in his religion, but that might be seen as an act of contempt of the legal rules of the state.

To understand legal positivity completely, one must follow it first. This means that the study of positivist concepts is to be done with no emotions included. The difference between ‘what’s the rule’ and ‘what suits us’ is to be understood, and that is when we get our answers.